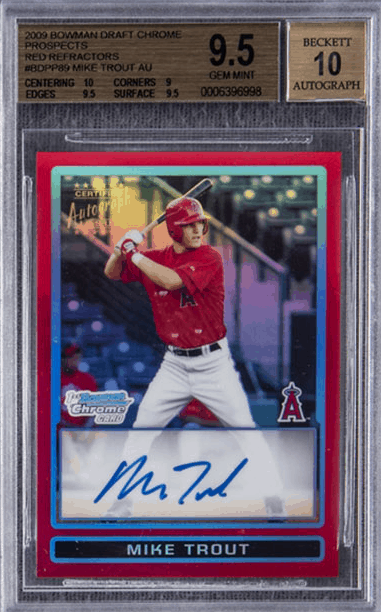 Simply put, Mike Trout is KING of his generation of MLB talent.  Not since Albert Puljos have we seen a hitter establish himself as head and shoulders above the competition.  Sure, there may be the occasional attempt to unseat Mike from his throne (Christian Yelich is currently taking the role of the latest would-be usurper), but to be king requires STAYING POWER.  And Mike Trout certainly has it.  So without further ado, let’s take a dive into some Mike Trout autographs/signings that are likely to show as much staying power as the King himself!

This lists consists of some historic off the charts (and out of reach) items as well as more affordable investments that we can all get our hands-on.  So, for the sake of shock value, let’s get the ones we can’t afford out of the way first! 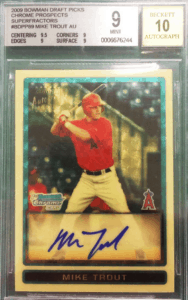 Okay, let’s start with the undisputed champ of Mike Trout autographs.  Say hello to the 2009 Bowman Chrome Draft Mike Trout Superfractor Autograph (if it’s even possible to get that many words out of your mouth in a simple greeting).  This card became an instant legend when “Vegas” Dave Oancea bought it off eBay for an earth-shattering $400,000 in May 2018.  With a price tag like that it’s obvious the man likes to gamble (the nickname kinda gives it away as well). 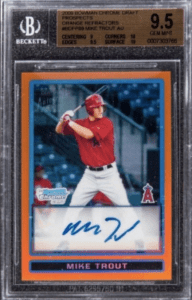 When that Superfractor we just talked about sold for $400,000, it paved the way for all its little bros.  And one has recently separated itself from the pack.  According to Bleacher Report, the 2009 Bowman Chrome Mike Trout Orange Refractor Autograph sold for over $186,000 at Goldin Auction in the Spring of 2019.  Take a moment to drool before we move onto some more down to earth price tags. 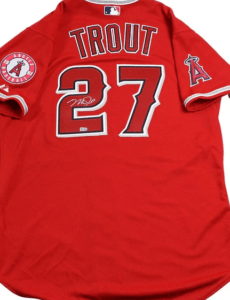 So now we’ve arrived at the action we can all take part in.  For instance, a fresh Mike Trout autograph on a jersey can be had for hundreds OR thousands of dollars (not hundreds OF thousands of dollars).  However, if you do end up spending a couple thousand on one of these go ahead and get it framed (in other words don’t wear it to the bar).

Unless we’re talking about one Mike used in-game action, these are something we can all add to our collection.  Just be sure the signature has been verified as authentic before you complete the transaction.  Also, don’t use it to play home run derby in your back yard once it arrives. 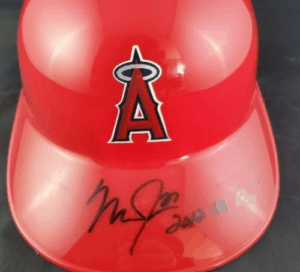 Whether it’s a replica or an official helmet, you can likely get one of these for under $1,000.  The question is how much will you be able to buy one for when Mike hits his 600th home run?  What about when he’s inevitably voted in as a first-ballot Hall of Famer?

Own a Mike Trout card you want to be graded?  Check out our Beckett Grading Service Review).

Like Apple, Walmart, and McDonald’s are to the DOW, Mike Trout is to the sports card and memorabilia investing market.  This guy is a can’t miss Hall of Famer who’s on a path to put up some HISTORIC numbers by the time his career’s over.  So if you happen to get yourself a Mike Trout autograph, be confident you’ll have an item that should stand the test of time!

Investment Rating Score Card: 10 out of 10