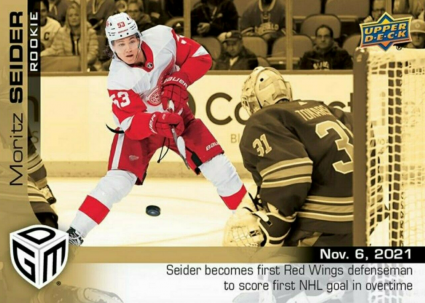 With two rookies among the favorites to win the Calder Trophy, the Red Wings certainly have to be optimistic about the future of their storied franchise. But what about the future of collector’s who own a Moritz Seider rookie card? We’ve already provided our thoughts on the Lucas Raymond card market so now let’s take a minute to take a peak at Detroit’s overlooked rookie defenseman.

The 6 foot 4 brut from Germany is clearly holding his own among this year’s crop of new players. On top of solid defensive play, the kid is also among the league leaders in assists. A talent Lucas Raymond is sure to love for years to come. With this type of production at the offensive side of the rink, it’s no wonder Seider is now the odds on favorite to win the Calder Trophy. And if he keeps it up? He’ll prove he has the potential to be an NHL defensive stalwart throughout the next decade. Time to take a gander and what cards are available so far!

Be sure to check out our Trevor Zegras Rookie Card Review! 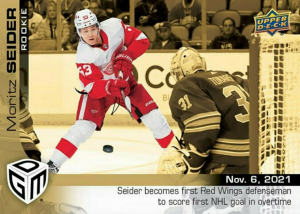 One of the first “big” Moritz Seider rookies card from Upper Deck, the Game Dated Moments shown above is coming out swinging. How so? The Gold parallel featured here has already sold for more than $100 before it’s even been released! If you’re high on Seider and looking to get in early, consider buying one of these NOW. Sure, the wait to actually receive your-preordered card might try your patience. However, the months in suspense could very well be worth it at this time next year. 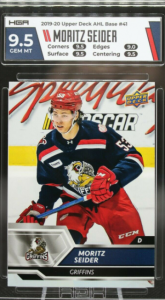 A card featuring Seider from his time in the AHL playing for the Griffins. While this is no where near as valuable as some of his first true rookie card releases will be, it’s still quite the gem if it’s in the right condition. For example, the 9.5 grade above sold for roughly $125 recently on eBay. Not bad for a card of the young star in something other than a Red Wings jersey. Easy pick up if you’re looking to get in early and at an affordable price! 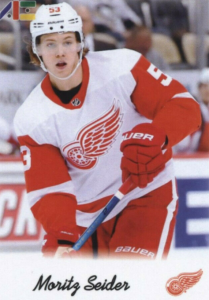 While it by no means has the name recognition of Upper Deck, All Sports makes up for it with a CLASSIC Moritz Seider rookie card. A simple yet elegant look at the young defensemen in control of the puck looking for a play (and likely making it consider how many assists he has so far!). At any rate, this is a MUST OWN card if you’re a fan of the more traditional look. On top of the classic style, price-wise it’s in the wheel house of what most casual collector’s are looking to spend. 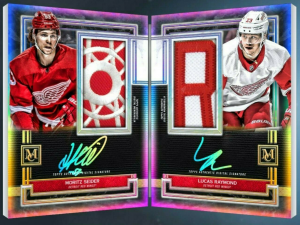 We know not everyone is into owning a card they can’t actually put their hands on. But on the bright side, with a digital card you won’t have to worry about accidentally smashing one of those corners when you remove it from the pack! Either way, Topps has released one heck of a Moritz Seider rookie card. We’ve been waiting to see something featuring both of the young studs in Detroit and now we have it. Seider and Lucas Raymond are shown here in a simple booklet format with Seider in the red and Raymond in the white. It’s stylish beyond argument and includes a digital autograph from both players.

As far as price goes, these sell for much higher than we would have thought. For instance, the card featured here sold in March 2022 for more than $200. Not bad for something you can’t hang in your card case. Unless you print it out that is.

Three Options We Like Better Than a Moritz Seider Rookie Card