Browse the most expensive rookie card options on eBay! 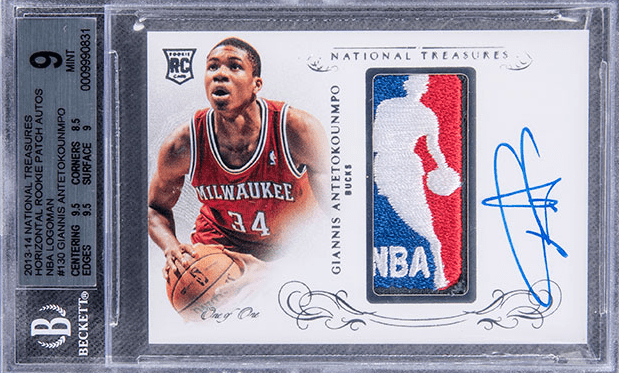 Most Expensive Rookie Card of All Time: Top 5 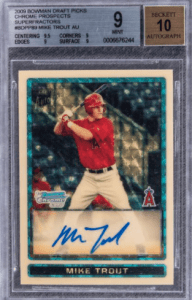 Vegas Dave strikes again! As if his record-setting $922,500 modern-day card sale of the Red Fractor version weren’t enough, Dave had to go ahead and shock the world with an encore performance. This time he sold the Superfractor for a whopping $3,936,000 on August 23rd, 2020. One thing surprising about the card is that it’s only graded at a BGS 9. What would it bring in if it were a 10? You’d probably have to start talking about the card in terms of market cap at that point. 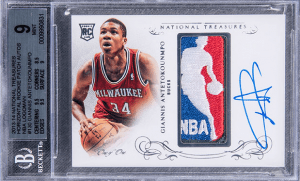 The card raised some eyebrows when it sold for $1,857,300 in September of 2020. Where the heck did this come from? Sure, he may be thought of as the best player in the game at the moment, but it’s not like he’s a legend. We could understand it if it were a Lebron James rookie card, but Antetokounmpo?? Of course, in a couple of years, the card will probably sell for twice that amount and make our disbelief look silly. 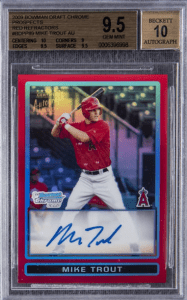 As we just talked about, this card sold for $922,500 in May of 2020. This one grades out better than the Superfractor at 9.5 BGS. However, there’s a total of 5 made so it comes as no surprise to see it sell for quite a bit less than the lone Superfractor parallel. An incredible looking card nevertheless. 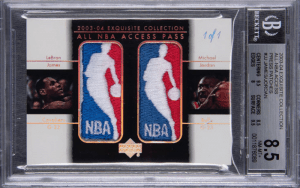 Arguably the two greatest players of all time on the same card? Sounds like a recipe for success. Success to the tune of an earth-shattering $900,000 sale in February of this year. Prior to the Giannis we just listed, this one the most expensive basketball card ever. Enjoy it while it lasts, Giannis, the way things are going your reign will be short-lived. 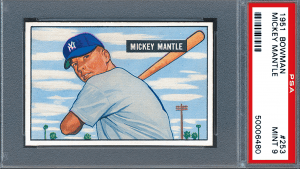 We all know the famous 1952 Mantle is one of the most expensive baseball cards of all time. But that was a card celebrating Mantle’s second year in the league (and his first really good one). While it doesn’t hold the near $3,000,000 value of the 1952 Topps, $750,000 is certainly nothing to scoff at! 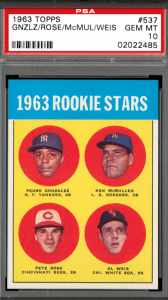 How about 4 rookies for the price of 1? It appears this notion played a big role when the card sold for $717,000 in August of 2016. It certainly wasn’t the talent of players shown on the card because other than Rose, the other 3 weren’t really good at hitting baseballs. Hey, at least they can take pride in being on one of the most expensive rookie cards of all time!

1968 Nolan Ryan/Jerry Koosman (Look for it on eBay) 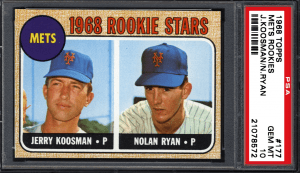 Unlike the Rose card, this one seems to get its value from the fact it features two incredibly capable baseball players. Both pitchers, Ryan is a Hall of Famer and all-time strikeout king, while Koosman is a 2-time all-star who made a couple of runs at the Cy Young award. This card went for over $600,000 in 2016. 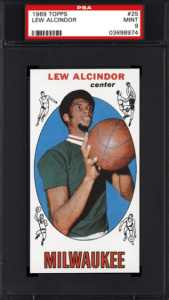 Also known as Kareem Abdul Jabar, this is his true rookie card. So it’s fitting that it made shockwaves when it sold for $534,678 in August of 2016 to become the most valuable basketball card on earth. Of course, the reign was short-lived with the Lebron/MJ card dethroning it less than 4 years later. 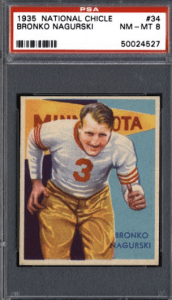 The short answer is the 1935 National Chicle Bronko Nagurski rookie card. The card is estimated to have a value of around $750,000. However, the card is NOT on our list because that value hasn’t been realized, with the most recent sale dating all the way back to 2011 for $350,000.

Now if you want to rank the most expensive football card in terms of REALIZED value, that honor would belong to none other than Tom Brady. The 2000 Playoff Contenders Championship Ticket card sold for $400,100 in February 2019. 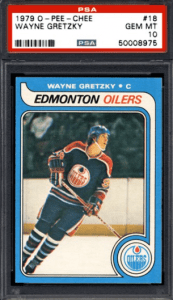 What About a Michael Jordan Rookie Card?? (Buy on eBay) 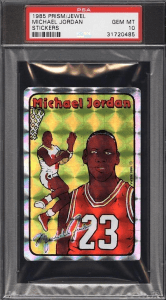 Nope, not even close. The most expensive Michael Jordan rookie card is the 1986-87 Fleer valued around $100,000. However, the card isn’t even from his rookie season so it’s a bit of a let down in our opinion. For what it’s worth, we like the less popular Prism/Jewel Sticker shown above for a quarter of the price! The classic MJ slam combined with the cartoon-style beats some of the best throw-back wannabes being released in the present era. Hands down.

Can’t afford these cards? Laugh it off by reading our take on the funniest baseball cards of all time!

Here we usually like to offer our two cents on short, medium, and long term investment strategies for the card we’re writing about. However, we like many, are nowhere near being in the market for ANY of the cards on this list. That said, the folks who have been buying these cards seem to be doing quite well all on their own. Here’s to that trend continuing! Cheers.