Most Valuable Basketball Cards of the 1990s 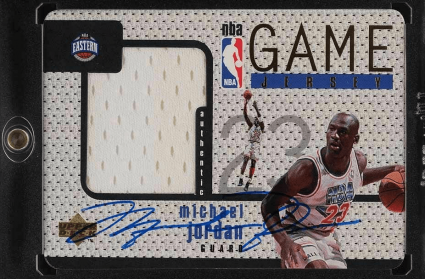 While some of basketball’s greatest moments happened in this decade, the most valuable basketball cards of the 1990s don’t necessarily capture them. Why? In general, the most valuable collector items are usually rookie cards. Therefore, you’ll need to find players that made their DEBUT in the 90s to find the decade’s most valuable cards. So although the 90s were dominated by Michael Jordan, he’s outranked by the guy who went on to lay siege to the NEXT decade.

And that brings us to none other than Kobe Bryant. While Bryant won 5 Championships in the 2000s, his rookie season was 1996. So just like MJ who saw most of his success the decade AFTER he debuted, Bryant became a household name by winning 5 NBA titles in the 2000s. And also like MJ, his most valuable cards are from his rookie year. So let’s flash back to 1996 and find out which top the list of basketball cards worth money. 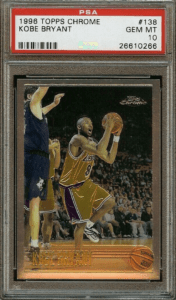 A card that has skyrocketed since that tragic day in early 2020. If you want this one in grade 10 condition, be prepared to SPEND BIG. Like over $100,000 big. Don’t have that kind of cash in your bankroll? Few do. No worries, go for one of the base cards (non-refractor). You’ll still be spending thousands but you probably won’t have to refinance the house to get one! 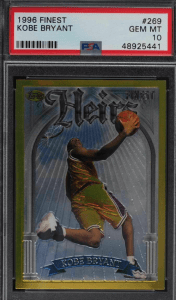 Here’s a card that’s shot up the charts lately. For instance, in late 2020 a grade 10 cleared $70,000 on eBay. Wow. The card has a gold edge and shows Kobe doing some sort of over the back slam dunk. During the Slam Dunk Contest? Looking to reign in your investment? Seek out a lower grade version as prices fall off pretty quick with 9s being less than $20,000 and 8.5s less than $10,000. 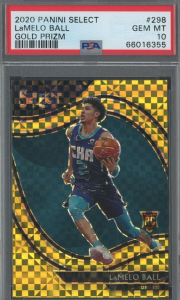 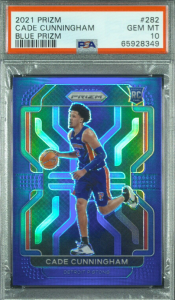 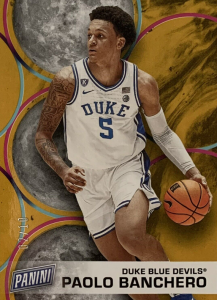 After Kobe, we move onto the one and only Michael Jordan. Just like Kobe. Jordan gets a whole section of his own because the list would only be full of MJ and Bryant cards if we didn’t set the two aside. At any rate, here are Jordan’s biggest cards of the decade. 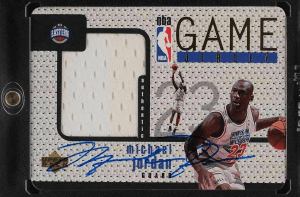 An UNGRADED one of these broke $50,000 recently. Unbelievable. Guess that shows the true power of MJ. Aside from value, the card offers plenty looks-wise.  Game-worn jersey? Check. Autograph? Check. A true gem. 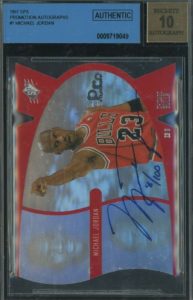 There were 100 of these manufactured so there should be a few swimming around out there but they’re obviously far from common. Finding one in mint condition is an even harder task. However, if you do happen to a perfect 10 out there you’ll be spending somewhere around $50,000 to bring it home. Or to take it immediately to your safety deposit box. We recommend the latter course of action. 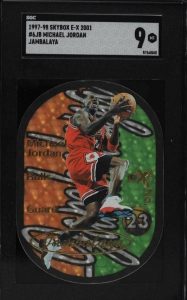 We couldn’t complete this list without mentioning one of the most valuable inserts from the decade. None other than the 1997 Skybox MJ Jambalaya. And if the word Jambalaya doesn’t already get you in a festive mood, maybe the art on this card will. MJ in the middle of one of his classic slams (tongue out of course) in front of an orange and green prismatic backdrop. As far as what it’ll take to own one? North of $50,000 just for an SCG 9 grade. When it comes to the 1990s it’s easily one of the top basketball cards worthy money. LOTS of money. 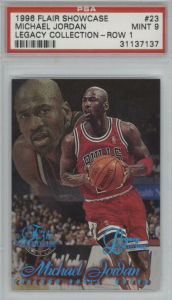 Not as valuable as the others on our list but we’d thought we’d bring attention to this little diamond in the rough. A spectacular card that features an in game photo shot of Mike looking to make a pass with light blue letters marking his name. In addition to the main photo, you’ll also notice the background image of Jordan in his iconic hands on the knees staring down the competition pose.

At any rate, the most attractive feature of this card is not the style. It’s the value. Even as a PSA 9 like we see above, the card is still worth more than $10,000. Just think of what a PSA 10 would fetch? Probably not enough to buy a new Lambo but certainly enough to get you in a new set of wheels if you’re in need of an upgraded ride. And with a legend like Jordan, the price should only continue to rise as the years pass.

Most Valuable Basketball Cards 1990s: The Other Guys

So for the sake of variety, let’s see who else is out there! 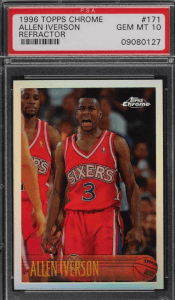 Unlike Kobe’s card from the same set, this one doesn’t show some sort of athletic move towards the net. Rather, just a photo that shows one of the things Iverson did best: bark down the court at teammates and foes alike. That and score points by the bunches. Grade 10s are floating somewhere around the $25,000 value range. 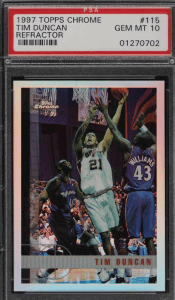 Another top rookie of the 1990s who went on to win 5 NBA titles in the following decades. Which are 5 great reasons that this card is valued at around $15,000 when in grade 10 condition! 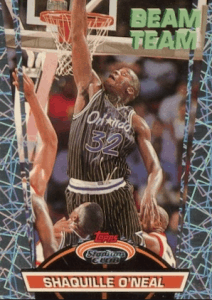 When it comes to Shaq rookie cards, this one sits atop the list. O’Neal is shown rising above the competition for a rebound or put back. As far as value goes, the card is approaching $10,000 if it’s in the right condition. A far cry from the Kobe cards we just listed but something to consider if you’re not looking to break the bank. 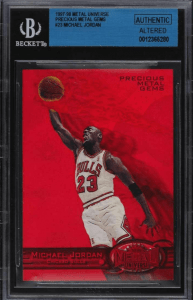 This is an incredibly rare set of cards that we give a category of its own due to the extraordinary amount of money people pay for them. For instance, the Michael Jordan Precious Metal Gems Red sold for north of $150,000 in 2020. In addition to that, there are plenty of other cards with MONSTER values.

If we’d have included this set it would completely dominate our little list here. Therefore, it serves as a nice little side note. Maybe we’ll take a deep dive at some point and dedicate an entire review to this highly sought-after set of cards. If you’re looking for basketball cards worth money from the 1990s a deep dive into this collection is certainly warranted.

It goes without say (or at least it should) that cards from the 90s were way easier to come by than some of the most valuable cards from modern times. For instance, some of the most valuable rookie cards are from within the last few decades. The reason? Many of them are of cards that share a common feature: there’s only ONE in existence. When it comes to that kind of rarity the massed produced decade of the 90s has a hard trouble competing. Be that as it may, a classic card holds way more nostalgia than the newer styles. Regardless of how many of them were made! 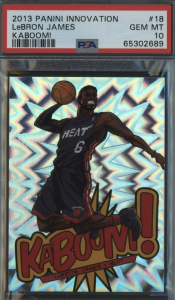 When it comes to modern day cards, nobody brings in the value like Lebron. For instance, the card shown here isn’t even a rookie card yet still sold for more than $15,000 in recent months. The reason? Scarcity. The card is a rare SSP that also touts a PSA 10 grade as it’s condition. Enough said. 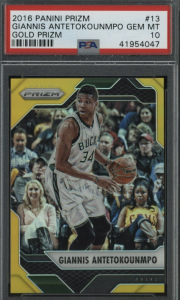 In addition to James, another player who attracts big dollar signs is Giannis Antetokounmpo. Just like the card above, this 2016 Gold Prizm is far from Giannis’ rookie season but still managed to rake in nearly $14,000 at a recent eBay auction. And also like the card above it’s incredibly rare and sports a PSA 10 grade. When compared to some of the rookie cards above, you can see just how much modern day scarcity can impact how much a money a basketball card is worth.

Don’t forget about the most valuable basketball cards of the 2000s!

Sure, you may be able to make a small percentage gain over the short term but we tend to think bigger picture when it comes to iconic players. If you decide to go short watch the market closely and pick your spot. 7/10

As we just said, iconic cards, and thus iconic investments, deserve some time to mature. The sports card market has been on fire and if that trend continues many of these cards will see major increases over the next 5 years. Safe to say that would make some incredibly happy investors. 9/10

We don’t think long-term often but with cards like these, it seems like the best bet. The faces on the front of these highly coveted collector items will ring out through the ages. Even if the market experiences a pullback you’ll likely see it rebound in a BIG way at some point in the long-term future. Sometimes the biggest gains take patience! 10/10

Check Out Our Other “Most Valuable” Lists

Most Valuable Football Cards of the 1980s

Most Valuable Baseball Cards of the 80s and 90s