Find the most valuable basketball cards of the 2000s on eBay 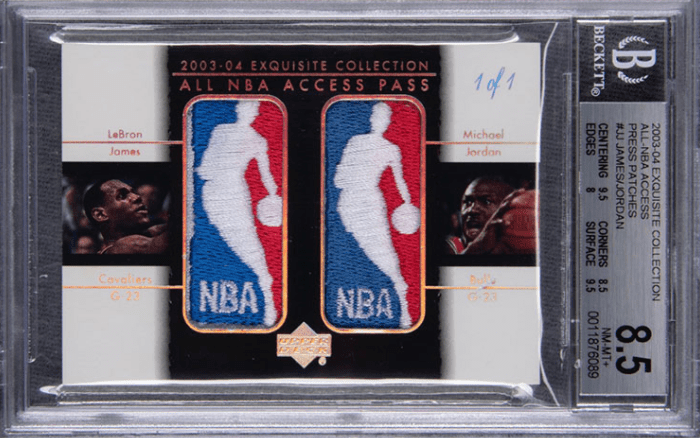 So you’re on a hunt for the most valuable basketball cards from the 2000s? That’s a good idea because in many ways the NBA in the 2000s had just about everything you could ask for. It was this decade that the legend Michael Jordan finally bowed out (after coming out of retirement for a couple of seasons). While at the other end of the spectrum, future legends like Kobe Bryant and LeBron James both started to put down their mark on the league. Additionally, the decade featured two of the greatest coaches in Phil Jackson and Gregg Popovich who hogged the decade with 7 NBA Championships between the two of them.

And let’s not forget the return of that infamous Detroit defense in the earlier part of the decade or the emergence of future stars Stephen Curry and James Harden. We could go on and on. Point is, the decade was truly unforgettable. Which brings us back to the cards. Anytime a period of basketball makes such a big impact, looking for cards that celebrate it is an awesome idea. Here are some of the most valuable!

While they’re not as valuable as these, don’t forget to check out our list of the most valuable baseball cards of the 80s and 90s!

The list is unsurprisingly dominated by players who had rookie seasons in the decade. However, Michael Jordan also managed to find his way onto the list a couple of times. Talk about a true testament to how much impact the Bulls legend had on the NBA and card collectors alike.

There are hundreds of high value, high potential cards that could have made this list but we have picked out 5 we really like. While the last 3 are a bit more down to earth, the first two on the list are truly mind-blowing as far as the price sticker. We’ll start with the shock value! 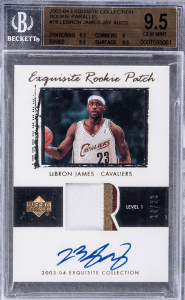 Not just the most expensive NBA card from the 2000s, but it was also once the most expensive basketball trading card in the modern era. That is until this Giannis Antetokounmpo rookie card surpassed it just a couple of months later. There were just 23 of these produced overall and in June 2020 a mint 9.5 copy sold for a staggering $1.8 million.

4-time NBA MVP and now 4-time NBA Champion, LeBron James is featured at the top of the card. Additionally, there’s a patch in the middle with an on-card signature at the bottom. And let’s not forget about those nice gold highlights.

There is also a base version with black writing instead of gold. This had a print run of 99 and will set you back ONLY $150,000 in mint condition. 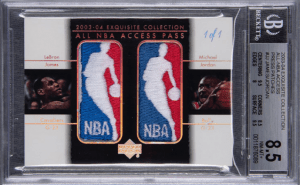 This card holds special sentiment because it was made the year after Jordan retired (for the last time) and during Lebron’s rookie season. Talk about timing. It’s only fitting to have LeBron as Jordan’s successor (and perhaps his only challenger to the title of best player of all time) on the same card as MJ himself. Before the card shown above broke its short-lived record, this one held the title as the most valuable modern-day basketball card. 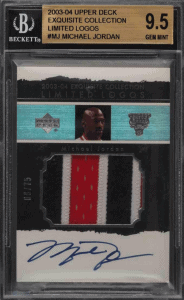 There are plenty of high-end MJ cards out there but few that have the ability to sell for almost $70,000 on eBay.  As far as looks go, the card features one of the bigger patches you will see on a Jordan card and includes his signature in blue ink at the bottom. An amazing looking card with an even more amazing value.

We say more down to earth, but the card is definitely still up in orbit somewhere. Let’s face it, not many folks make a habit of dropping $70,000 on a card. Even one like this. So let’s shift to a couple of options that, while valuable, might be in the realm of some of the more serious regular-guy investors out there. 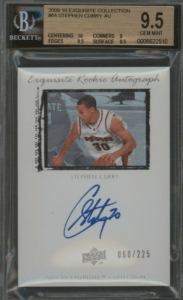 Steph Curry is not known for playing in the 2000s. Rather he gained fame as being the man who ushered in the next decade’s 3-point era. However, his rookie year being in 2009 qualifies him for this list.

The card has a similar design to the LeBron James RC we discussed earlier and features Curry at the top with the autograph taking center stage in the middle of the card. Our only gripe is it does not feature a patch. Darn.

There were just 25 of the more valuable gold parallel printed and they currently hold a value of around $15,000 in gem mint condition. Which actually seems kind of reasonable when compared to others on this list. The base version had a higher print run and has a value of around $10,000. 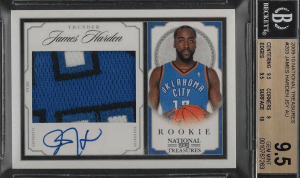 Another player known for being a stalwart in the 2010s. However, just like Curry, Harden’s rookie year was in the 2000s. Therefore there are a few valuable Harden cards from the decade.

This particular card is horizontally printed with a big patch on the left and a signature (kind of small) underneath. Harden is pictured on the right while the background is white with black trimmings.

There are a few parallels of this card but the #/5 edition is valued at around $20,000. Additionally, there’s a black parallel (1/1) that is vertically printed and has previously sold for $60,000 on eBay.

Who makes basketball cards from the 2000s?

As you can see Upper Deck dominates the most valuable card market for the decade. However, there are plenty of options for basketball cards in general. Donruss, Topps, Bowman, National Treasures, Panini, and even Skybox basketball cards have value. Look for a price range you’re comfortable with and go from there.

Related Content: Don’t forget to check out our list of the most valuable hockey cards from the 80s!

These cards are the blue chips of the industry. The players on this list along with the ones shown on the front of all the other most valuable cards from the 2000s are there for a reason. They’re not just incredible players, they’re legends of the sport. Therefore, we like a medium to long-term approach when it comes to most cards in this category. However, as always, watch the market. If there’s a huge short-term increase don’t be afraid to take your profits!