It only makes sense to be interested in picking up some of the most valuable football cards from the 1980s. Why? The decade was an amazing era for the NFL that featured some of the greatest players to ever play the game.  Not to mention some of the historic moments that still feature on highlights reels to this day.

The decade was in large parts dominated by the San Francisco 49ers who won 4 Super Bowls. Therefore, it comes as no surprise that some of the decades most iconic players and trading cards come from players who spent their years in California.

In addition to the San Fran boys, there are also some players that went on to become revered as some of the greatest to ever play. Something that translates into BIG TIME VALUE.

Question of the day: Do you prefer the wild styles of today’s modern sports cards or the simplistic design shown on the cards below? Let us know in the comments!

8 of the Most Valuable Football Cards of the 1980s

This list is, as usual, dominated by rookie cards with every single one being from a player’s rookie year. Another sign of the era is apparent when we see the list is heavily dominated by Topps which was one of the only sets available during the decade. While the list is mostly Topps, there are also a couple of cards from Score that make an appearance. 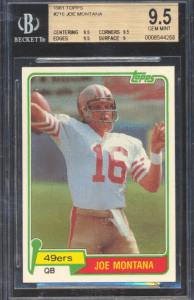 It’s no surprise that the 49ers quarterback who led them to 4 Super Bowl victories and was named Super Bowl MVP 3 times, makes this list. While Joe Montana is on the front of many cards, this is his ONLY rookie card. Something that plays a big role in the card’s value.

The card features an upper-body picture of Montana throwing the ball, in what looks like a typical practice session. This picture takes up a large portion of the card, with the border being a thin green line. Additionally, the team, name, and position are written at the bottom.

They are a lot more common in mint 9, and this translates to a smaller value of around $2,500. As usual, there is a sliding scale with lesser graded cards, but the lowest or ungraded are accessible to any collector with values around $50. 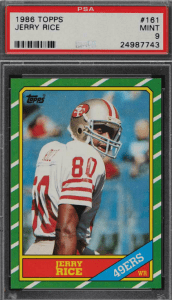 Like the Montana card we just covered, this is Jerry Rice’s only rookie card. The man is the greatest wide receiver of all time, no questions asked. Additionally, Rice remains one of the biggest names ever to play in the NFL so it’s understandable why it’s on this list.

The 1986 Topps set comes with a unique, and slightly alarming, green border. The edge also contains white stripes that help to give it a football field look. Whether you like the design or not, it certainly makes it stand out from other sets of the period. The main feature of the card is again the picture of Rice which takes up the majority of the space.

On the downside, the unique border is prone to damage. This makes it even harder to find one in mint condition than even the Montana rookie. Just 58 out of over 22,000 have been graded gem mint 10 and they have a value of around $30,000. There is again the same sliding scale seen with Montana, but low graded or ungraded cards can be picked up for around $30. 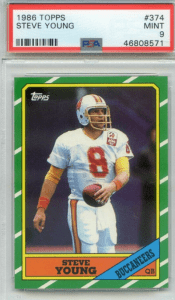 More known for his career in the ‘90s, Young shadowed Montana in the back end of the ‘80s before taking on the starting role and leading the 49ers to a Super Bowl of his own. His rookie season was actually in Washington; hence this card features him as a Redskins player. It has the exact same football field design as Rice’s card and all the caveats that go along with it.

Another player known for his play in the ’90s, Sanders had 10 consecutive 10,000-yard rushing seasons for the Detroit Lions and was inducted into the Hall of Fame in 2004. Although he intentionally faded from the limelight after that (much respect).

The fact that it’s not made by Topps makes it unique all on its own. However, the card features the same simple design as the Topps cards so don’t expect anything crazy. It has a headshot of Sanders with green borders, the player details at the bottom, and the year at the top.

It’s a very highly sought-after card but it seems to hold its condition a lot better.  Therefore a gem mint condition pops up a lot more often than some other cards from the era. With nearly 2,000 graded in top condition by PSA, a valuation of around $1,500 is still impressively high. You can grab a mint 9 for around $100, while lower condition cards sell for as low as $20. 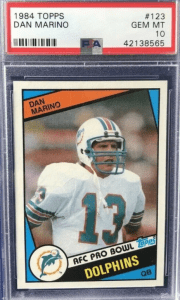 Marino never managed to lead the Dolphins to a Super Bowl win. However, he remains a franchise legend and is regarded as one of the best QBs to ever play.

While it’s the only Marino rookie card, it was produced for the Pro Bowl so the word rookie doesn’t appear on it. Additionally, the card features a headshot of Marino with a slightly annoying diagonally printed border and features. 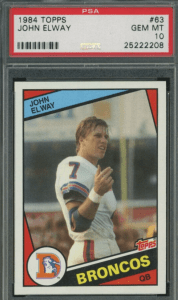 John Elway made his name in the ‘80s as the highly-rated prospect that created quite the controversy in the draft. While he was embarrassed in his first Super Bowl, the quarterback came back to lead the Broncos to two Super Bowl victories in the ‘90s.

This card features the same diagonally printed design as the Dan Marino card we just talked about. The picture looks like it was taken between at practice, and due to the no helmet, Elway’s golden locks are on full display.

This is another card that does not grade well, with just 170 out of the 20,000 or so seen being deemed to be in the top condition available. Something that plays a part in the average auction price of around $4,000. Just like all the others, the value has a wide margin with lesser copies sitting under $50.

Aikman is a Dallas Cowboys legend. He and Emmitt along with Jimmy Johson pulled a hapless Cowboys team out of the gutter and restored it to greatness. How great? The team won 3 Super Bowls in the 90s and was one of the last great dynasties.

The card design is the exact same as Barry Sanders Score rookie card, with the green outlining and a headshot of Aikman on the practice field. As usual with the 1989 Score set, the card grades very well. This means the value in PSA 10 is a comparatively low $500, and mint 9 cards can be picked up for $50.

As far as looks go, the card has a unique design that features Taylor ‘in action’ fully suited and ready to wreak havoc. There are mixed opinions on this style. Some seem to love it while some prefer the more traditional style. The border is in the typical Topps style format, very simple and understated.

This seems to be a very rare card with just 600 being seen by PSA. Additionally, only 72 have received a gem mint 10 condition.  Value for one of the PSA 10s? Somewhere around or above $5,000. However, just recently a BGS PRISTINE condition 10 raked in more than $14,000.

Related content: Check out how these cards compare to the most valuable baseball cards from the 1980s and 1990s!

If you ever needed confirmation that the 1980s were a simpler time,  this is certainly it. There were no flashy refractors, countless parallels, or rare inserts. Just a bunch of simply designed base cards. This is probably the last decade where this rings true so these cards have a little extra charm if you ask us.

While you may like the simple design, the cards are far more common the some of the most valuable football cards you see today. Therefore, they can’t hold a candle to some of the obscene value we see going into 2021. However, as you can see, there is quite a market for mint condition rookie cards of NFL legends that started their careers in this decade. So next time you’re about to unload on some Gold Refractor Purple Twist Shattered Ice Teal Lime Neon Prizm card from 2020, why not consider taking a step back and considering one of these classic beauties!

Most Valuable Football Cards of the 1980s Investment Strategy

When you invest in a player that no longers play the game, you’re only concern is the health of the overall market. That and the popularity of the sport. Since football is in full swing, now may not be the time to buy. However, if you wait until the off-season a short-term play on one of these could bring some decent profits. 7/10

The overall market has been more than healthy. To say the least. Thus, we’d consider a medium length investment to be a much wiser option than a short term play. Consider stashing one for a couple of years and see where the market is at. If you love it? Sell! If not, go long. 9/10

The most valuable football cards of the 1980s are generally hard. Additionally, they tend to be incredibly popular amongst collectors. How about that for demand? These two factors should act to push up the valuations along for years to come. 10/10