Find the most valuable hockey cards from the 80s on eBay! 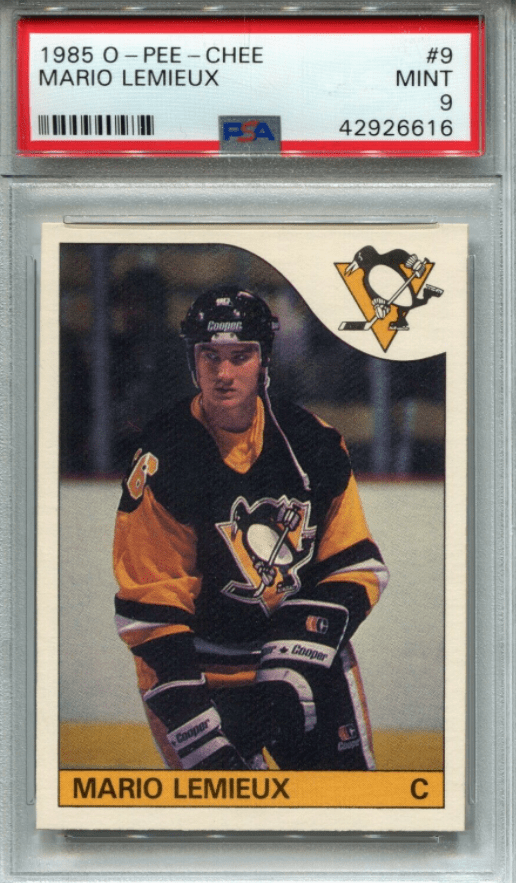 The National Hockey League looked much different in the 1980s than it does today. For one, there were much fewer teams and an explosion of offensive statistics. Therefore, there began to be more strategy in the neutral-zone and the importance of sound defense was realized. Additionally, the game seemed a little bit tougher with the players wearing pads that were smaller than we see today.  In fact, many even continued to skate helmetless!

When it comes to teams, the decade was dominated by the Edmonton Oilers and New Jersey Islanders. As far as the players go, names like Wayne Gretzky, Mark Messier, Peter Stastny, Jari Kurri, Paul Coffey, Mario Lemieux, and Brett Hull ruled the day (Gretzky and Lemieux put up a few numbers that will probably never be touched). If you’re looking to invest in some great hockey cards, the 1980s are not a bad place to start.

Now let’s go through over some of our favorites from among the most valuable hockey cards from the 80s!

Most Valuable Hockey Cards From the 80s:  7 We LOVE 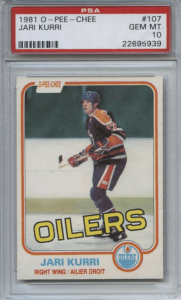 There are only 30 of these cards that are skating around in gem mint condition and they are a beauty. O-Pee-Chee ruled the hockey card industry and especially in the 1980s. Kurri is pictured in a classic Oilers uniform skating on the ice. This is a card that has extreme value, garnering as much as $1100 the last time it went to auction a few years back. Kurri won five Stanley Cup Championships during his playing days. He was a part of one of the greatest dynasties in hockey history. He has been inducted into the Hockey Hall of Fame and in 2017 was named to the NHL Greatest 100 Players List. 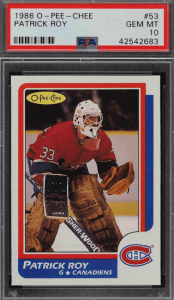 It was tough being a goalie in the 1980s. But Patrick Roy made it look easy. And since he was one of the greatest to ever play, owning his O-Pee-Chee rookie card isn’t a bad idea. The card has a white border and features Roy with a red Canadians uniform, brown pads, and white helmet. As far as value goes, the card has been known to go for more than $3,000 if it’s a gem. Roy won four Stanley Cups, was named the Conn Smythe Trophy winner three times, won the William M. Jennings Trophy on five separate occasions, and won the Vezina Trophy in three different years. 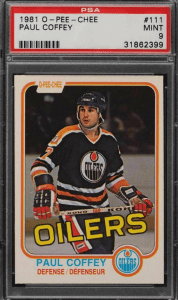 Like this Craig Biggio rookie card, this Paul Coffee rookie card isn’t one of the most valuable in terms of monetary value (although a nice one will still fetch you a good price).  However, in terms of sentimental value, it’s through the roof (we collected Coffee for a bit!).

It sort of seems like the Oilers were unable to draft a single bad player in the 70s and 80s. Paul Coffey was another example of a great find and a great player that helped contribute to the many Stanley Cups that were brought to Edmonton. The card depicts Coffee in his blue/orange sleeve Oilers jersey, gracefully holding his stick. He was a defensive player known for both his speed and his scoring. He ranks second behind just Ray Borque in goals, assists, and points for a defenseman. 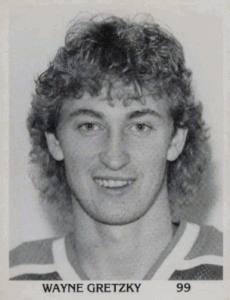 We love weird cards and this card is one of the weirdest. During the 1981 season, the West Edmonton Mall produced hockey cards for the Oilers and of course, Wayne Gretzky’s can fetch you a pretty penny. It is a pretty basic shot of Gretzky, head up, looking at the camera in black and white. There are believed to be just nine of these cards in existence and one recently went for over $1700. Gretzky as you know is the best to ever suit up. He won four Stanley Cups with the Edmonton Oilers, there isn’t a scoring stat that he doesn’t own, and he has eight Hart Memorial Trophies. He was the scoring champion on nine different occasions and a Conn Smythe winner twice. It’s no wonder even this strange card is one most valuable hockey cards from the 80s. 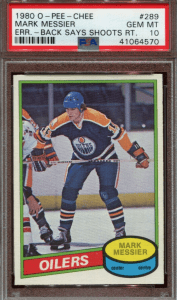 Another shocker here.  The Oilers have another incredible rookie lacing the skates up in the 1980s. This time it’s none other than Mark Messier. There aren’t many of these available, especially in mint condition. Messier is bent over, stick in hand, and ready to box out an opponent for a faceoff. $3,000 plus is no problem for anyone holding a perfect 10 grade. Messier played for over a quarter-century in the NHL with the Oilers, Rangers, and Canucks. He won six Stanley Cups and is in the World Hockey Hall of Fame. 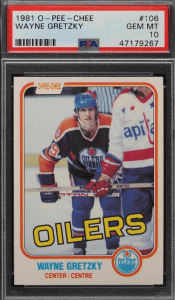 He is the greatest hockey player of all time and there is no question about it. Gretzky is one of the few players who can fetch you a monster price with a card from the 80s that isn’t a rookie card. This Gretzky card is a rare find if it’s in mint condition. As far as looks go, the card shows Gretzky leaning over during the 1981 season. The card has gone for as high as $5600 in gem mint condition and for as much as $425 in mint condition. Gretzky is nicknamed, “The Great One” and owns practically every NHL scoring record that exists. 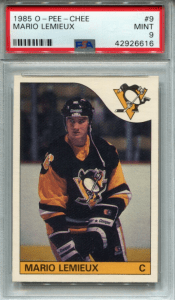 Finally, we have a great rookie on this list who didn’t play for the Edmonton Oilers. As far as pure talent goes, Mario Lemieux may be the only player who can come close to The Great One. As far as the card goes, a perfect 10 grade is incredibly rare and has been known to sell for over $10,000. The card shows Lemieux with an unstrapped helmet in a black and yellow sleeved Penguins uniform.  He won Stanley Cups during his playing days, two Conn Smythe Trophies, six Art Ross Trophies, and is in the Hockey Hall of Fame

Most Valuable Hockey Cards From the 80’s Overview

Whether you hate or love the high-flying offensive-minded style of the 1980s, one thing is indisputable: the produced the best hockey players to ever take the ice.  Additionally, this decade helped usher in the NHL as a popular sports league. From the smoked filled arenas, 21 goal games, and legendary dynasties, the 1980s hold a special place in the hearts of many hockey fans. And if you’re one of them, owning one of the most valuable hockey cards of the 1980s only seems right.