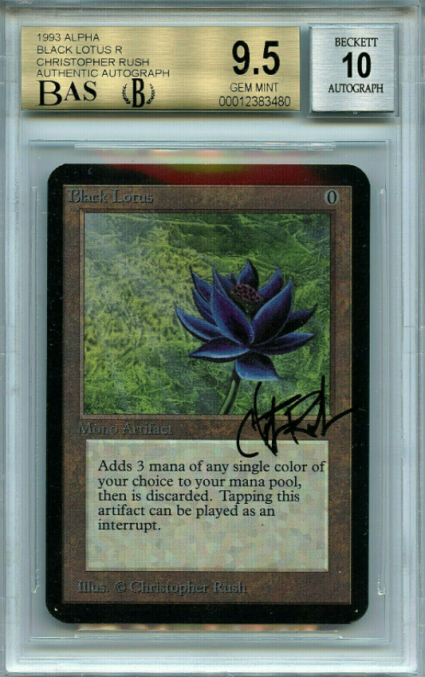 While games like Pokémon and YuGiOh tend to get most of the attention, one shouldn’t underestimate the card game that ushered in the genre in the first place. Magic: The Gathering. Yes, even before Pikachu was running amok, Magic was capturing the minds and imaginations of folks across the planet. A whole FIVE YEARS before.

With such a rich heritage and historical significance, it’s no wonder why the trailer blazer of the card gaming world has become a much sought after collector’s item. So much so in fact that buyer’s have been known to shell out 5 or 6 digit numbers just to obtain ONE CARD. So now that we all know how pricey some of The Gathering collectibles can be, let’s take a look at the MOST valuable Magic cards. Buckle in tight because this is going to get crazy! 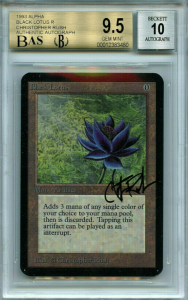 The top card from the original collection released in 1993 is none other than the beautiful Black Lotus. With the ability to add a whopping 3 mana of a single color of your choice it’s no wonder why. Thinking about holding onto the card after you’ve added your mana? Not a chance! The Black Lotus must be discarded after making a move. Also, in case you didn’t know, tapping the Black Lotus can be played as an interrupt.

While what the Black Lotus is capable of when playing the game is certainly impressive, what it’s capable of bringing in on the open market is FAR more impressive. For instance, an Alpha Black Lotus from the original collection recently sold for north of $80,000. And that was for a grade 7.5. Just imagine what a mint 9, or dare we say a 10, could bring in. Mind boggling to say the least. 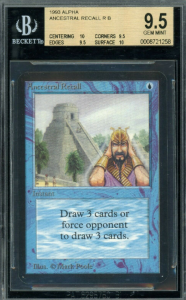 A menacing card that will induce a feeling of pure terror in even the bravest of hearts. Just take a look at the fellow on the front. Hands over the ears and a steel blue gaze that evokes a powerfully ominous sense of impending doom. At any rate, once you understand what this card can do, it’s easy to see why. Need 3 cards? No problem! Ancestral Recall will delver your wish. Or are you in a position where you’d rather bog down your opponent with an additional 3 cards? Yep, ole’ Recall can do that too.

When it comes to prices, this is clearly one of the Most Valuable Magic cards of all time. A grade 9.5 recently sold on eBay for an even $50,000. So if you’re thinking about putting down 20% on a new home, you’ll need to consider opting for minimum down payment and leveraging the rest in order to bring home a 1993 Ancestral Recall. Mortgage insurance isn’t that big of a deal anyways! 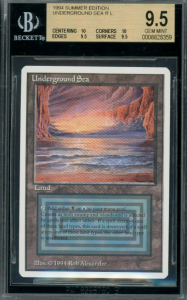 Common knowledge insists that seas are supposed to be ABOVE ground. Not this one. Just take a look at the caverns surrounding this deceivingly peaceful body of water. Safe to say those waves aren’t tasting the sun’s warmth anytime soon. Perhaps that’s why this card can count as both swamps AND islands. You should feel fairly confident if you’re holding one, but watch out for a spell that destroys one of these land types because if such a scenario plays out you can go ahead and say “night night” to your card. Meanwhile, if a spell merely alters one of the land types, the other remains unaffected.

While playing a card with these abilities may have been tempting to early Magic players, the smartest move would have been to put it in protective casing and promptly floor it to the nearest bank with a safety deposit box. If it’s graded above a 9 like the one shown above, Underground Sea is more than capable of fetching more than $20,000. An ability that puts the swamp/inland versatility to shame. 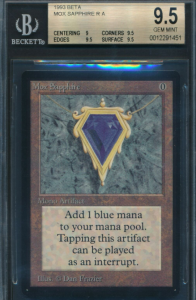 We’ve all heard the slogan “Diamonds are Forever”. Yea, yea, yea. But can they add an entire blue mana to your desperately depleted mana pool? Didn’t think so. In addition to getting you right on blue mana, the Mox Sapphire can also be played as an interrupt. So if you’re thinking about spending thousands of dollars to buy that special someone in your life a diamond ring, perhaps take a step back and consider how much more of an impact mint condition 1993 Mox Sapphire could make.

As far as prices go, the Alpha versions bring in the biggest dollars with mint versions valued at more than $30,000. You won’t be able to put the Mox Sapphire on your spouse’s finger, but one could argue a card like this says “love” way more than a lousy rock on a ring. Ponder it!

Now that you know what the most valuable Magic cards are…..

Check out the most valuable YuGiOh cards! 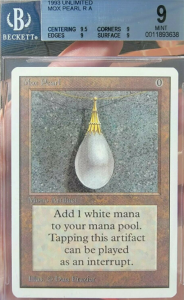 While the Mox Sapphire card we just covered can fetch you 1 blue mana in a pinch, the Mox Pearl has a similar ability. However, rather than blue you’ll receive a white mana. In addition to similar mana traits, the Sapphire and Pearl also share the same ability as playing as an interrupt. A legendary card from the original deck, the Mox Pearl has been known to sell for more than $10,000 if it’s in the right condition. 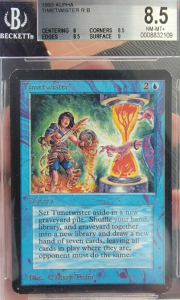 If an unescapable sense of foreboding came over you after taking a gander at the Ancestral Recall card, just wait until you set your eyes upon Timetwister. Even though the warrior on the front is equipped with a sword, it’s plain to see he’s shaking in his boots. That blade simply isn’t enough to help him overcome the shock of what those sorceress hands are about to do. And what is that you ask? Shuffle your hand, library, and graveyard together and draw 7 new cards while making your opponent do the same. Enough said?

Timetwister is clearly one of the most valuable Magic cards out there as even a near mint grade can line your pockets with over $15,000 in cold hard cash.

Other Magic Cards Worth Over $100

Survival of the Fittest