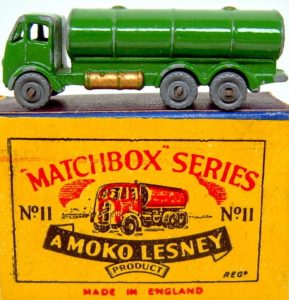 Since few collectible toys in the world hold as much prestige, notoriety, and brand recognition as Matchbox, it seems like a no-brainer to cover some of the rarest Matchbox cards on the planet. Many may argue that collecting is all about nostalgia. Which may be true. But let’s face it, at the end of the day the one thing everyone is interested in is VALUE. And when it comes to value, some Matchbox cars hold a tremendous amount of it. And what’s one of the driving forces behind value? Scarceness. That’s why we’re about to take a look at some incredibly rare Matchbox cars and how much they’re worth. But first, let’s take a deeper dive into the history of the brand that holds such a special place in the hearts of collectors everywhere.

Matchbox History at a Glance

The brand was launched in 1953 by Lesney Products. One of the first toys that started creating buzz about the Matchbox brand is the famous red Lesney Matchbox Road Roller. Succesful as the Road Roller was, Matchbox was thirsty to prove it was no one-hit-wonder. As a result, the brand would go on to gain even greater momentum by creating a line called “SuperFast”. Superfast was made in 1970 as an improvement on Matchbox’s original line to give the cars and trucks some serious get-up. Over time, Superfast would expand to include even military lines such as “Battle Kings” and “Sky Busters”.

Lesney later sold the Matchbox brand to Tyco in 1992. But the changing of ownership wasn’t done there. Tyco was then bought out by Mattel in 1997 in the midst of a heated competitive rivalry with Hot Wheels. At that time, the school of thought among Matchbox collectors was that Hot Wheels was an inferior brand that had a harder time scaling their line as opposed to Matchbox. Needless to say, when Mattell purchased Matchbox the morale of many Matchbox enthusiasts was devastated.

However, the Matchbox brand would be revamped in later years by a series known as the I-75 series. Additionally, the Superfast series was revitalized multiple times. Currently, Matchbox is focused on a healthy mixture of classics and new arrivals and even introduced a KIA to the mix in 2022. Regardless of the direction the brand goes, the market for its cars isn’t going anywhere. Here are some of the most valuable Matchbox cards sold recently.

This classic rare Matchbox truck is painted yellow on the bed and green on the cab. A color combo that just screams vintage if you’re asking us. In addition to the cab being green, the crane features that same earthy color. Other standout features include the classic BP logo on the side and a cool little miniature siren on the roof.

But it’s not the looks of this car that make it so valuable. The reason folks are willing to pay such a high price for this beauty is the fact it is a true Matchbox original dating back to 1965. Making it an incredibly rare find. The one shown above recently sold on eBay for more than $5,000. 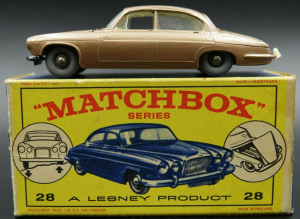 Ever dream of stepping into a Jaguar but didn’t want a $1,000 car payment? If so, this mini classic Jaguar from Matchbox might be right up your alley. Sure you won’t be able to drive it, but chances are this valuable collector’s item will end up raising WAY more eyebrows than a mid-life crisis mobile such as this 2022 F-Type R. And with a price tag of somewhere around $2,000 you can pick this baby up for a FRACTION of the price.

At any rate, a no-brainer for our rare Matchbox cars review. And while it may not be as valuable as the Wreck Truck above, it is leaps and bounds ahead in the style factor. Don’t say we didn’t warn you though. Chances are more than one envious friend will storm out of you’re next party once they see this beauty in the ole’ display case. As Fat Joe likes to say “Jealous Ones Still Envy”.

These bad boys were produced from 1955-1958 before they were later replaced by the 11b generation of tankers. As far as the first edition goes, you can see above that it’s dripping with green paint and has a bit of gold for the trim. And don’t forget about those metal wheels! At any rate, this is a rare find and a prize to anyone who is serious about collecting rare Matchbox cars. Something that shows in a 2021 sales price of more than $1,500.

If you were hoping a Superfast line member would sneak onto the the list, hope no more. The rare metallic green version shown here is a preproduction model from 1970 and features the same green and yellow combo as the Wreck Truck we opened with. The car is sleek, compact, and ready to take on the road. Just like you’d expect from any car worthy of the Superfast line. While the least valuable on the list, it is certainly nothing to scoff at as it sold for nearly $1,300. 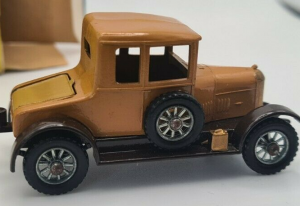 A rare find indeed. This beauty brings you back to the EARLY days of automobiles in a way like no other. Heck, if we go back much further we’ll be looking at a horse drawn carriage instead of a gas powered engine! At any rate, not only does this car have timeless looks, it’s also quite valuable. While not up there with some of the bigger items on the list, it had no problem hauling in over $1,000 recently. A perfect collector’s item for anyone who’s not looking to go too crazy on the wallet.

This car screams vintage. It’s an intimidating miniature muscle car that the cool kids from decades past would have loved to be in while cruising the strip. It was cool then and it is still cool now.    As far as value goes, these can REALLY get up there in price. For instance, a rare purple original sold for more than a whopping $12,000 in recent months. Additionally, both the Hot Pink and Blue have sold for over $3,000 and $7,000, respectively.

Another hotrod that’ll really knock your socks off. This classic “cool ride” has a great look regardless of the color. In our opinion, a Camaro has so much character that one cannot possibly go wrong! Anyways, there have been several of these sold in 2021 in the $1,500-$3,000 price range. 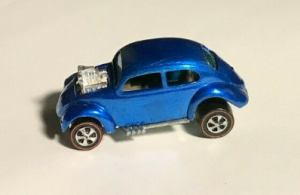 Love them or hate them, the Bug is one of the most iconic cars of the 60s’. In an era of sweeping and dramatic change, this corny little car from VW proved to be a stroke of marketing genius by appealing to the younger generation that wanted nothing more but to own a car that was the exact opposite of something their parents would drive. Regardless of how much cooler their parents cars were!

Anyways, the iconic name of the Bug shines through not only in the real world but also in the world of rare Matchbox cars collecting. And it shows. For instance, the car above recently sold for nearly $2,500! While the value isn’t that of the Olds we just talked about, it certainly can compete with the Redline Camaro. So even if you’re not a fan of the Bugs style, an investment in one could end up making it your favorite car of all time if you sell it for big profits down the road.