Buy the Most Valuable Neymar Jr. Cards on eBay! 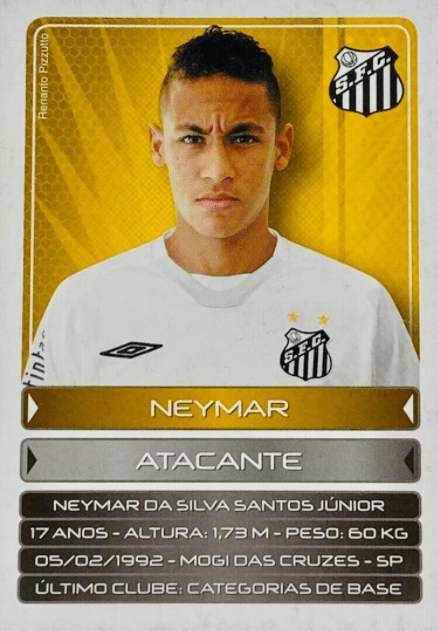 There’s no shortage of fans and collectors looking for the most valuable Neymar Jr. cards they can get their hands on. He is without a doubt one of the biggest names in the game right now, after all.

During his career, Neymar has scored over 300 club goals, won more than 100 international caps, and scored over 60 goals for Brazil. In terms of major honors, the forward has won 2 La Liga titles, 2 Ligue 1’s, 1 Champions League, and almost countless domestic cups. How’s that for a resume?

Neymar’s rookie season came in 2009 at Santa Brazil when the now megastar was just 17 years old. That year played 46 games and put 14 balls in the back of the net. A very impressive number for someone that hasn’t even reached the legal driving age. But when it comes to his rookie season, finding a trading card from that year isn’t easy. Therefore, many of the most valuable Neymar Jr. cards aren’t from his true rookie season. Now let’s find out what some of them are! 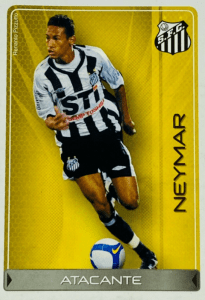 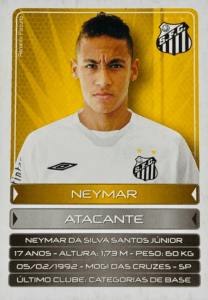 The little-known Brazilian company Abril Gol can claim two Neymar Jr. rookie cards. One of the cards features a headshot of Neymar in his Santos shirt with stats down below and the other features him in full Santos kit dribbling with the word ‘alcante’ at the bottom which simply translates to ‘attacker’.

The cards are fairly similar and are incredibly close in values as a result. It is so far to find these cards in mint condition that graded as low as PSA 5 they can sell for $500. Which should give you a pretty good idea of what a mint condition card would cost. A LOT. 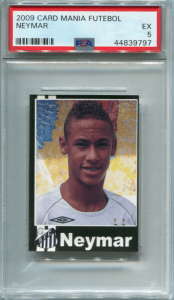 Another rare card from Neymar’s true rookie season. Just like the 155 above, there’s not much going on with this card other than a headshot of Neymar Jr. Also just the card above, it’s crazy hard to find one in good condition. You’ll need to shell out at least $500 just for a grade 5. 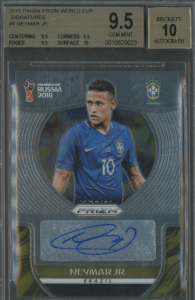 You’ve gotta be pleased anytime you can get your hands on Neymar Jr. card with an autograph. This one features his signature in blue ink that matches his blue uniform. In addition to those features, the card also has a dark background and a greenish swirl over the bottom portion. Be prepared to spend at least $1,000 if you want one in mint condition. 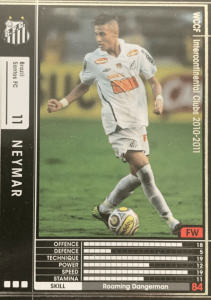 This card is a Japanese production that was created for a card game called World Club Champion Football, which gives it the very unique characteristic of having player stats across the bottom. Overall, the card layout as a whole is satisfying enough and features an action photo of Neymar in a Santos kit.

When it comes to value, these have seen a big increase recently but aren’t in the area of the ones we’ve previously listed. For instance, a PSA 9 has gone for around $150-$200. Meanwhile, ungraded cards will cost you less than $30. 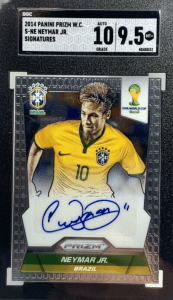 Just like the 2018 version we talked about earlier, 2014 contains the upper body of Neymar and features his signature at the bottom. This was Neymar’s first World Cup so it comes as no surprise that there’s is a big market for his cards from this year. The Prizm parallels are valued at around $1,000 in good condition. Lower budget? Go for the base card up for around $300. 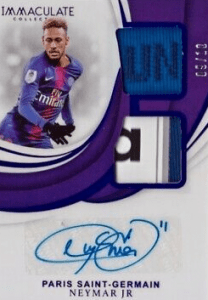 Int he past Immaculate were limited print runs of around 15 cards each. However, there’s now a release every year so the chances of finding them are far better. The card features a flat out aggressive design. Neymar is in full PSG kit off to the left-hand side with the patches on the right. Oh and there’s an autograph at the bottom in case you were wondering. BEAST of a card. One with no grade will cost you at least $500.

Interested in American football? Check out the most valuable Aaron Rodgers cards!

On the downside, Neymar Jr.’s reputation has suffered slightly since leaving Barcelona. Neymar reportedly left so he could step out of the shadow of Lionel Messi and become a true contender for the Ballon d’Or.  However, so far that plan hasn’t faired so well as Neymar Jr. didn’t even make the top 30 in 2019. Disappointing to say the least.

On the upside, Neymar is still just 28 years old and will be entering the prime years of his career. Neymar’s scoring remains world-class and his celebrity status is as big as ever. Couple this with the fact his PSG team has finally started making some progress in the Champions League (losing in the final last season) and seems likely that Neymar Jr. will win more titles.

Bottom line: despite how many folks he rubbed the wrong way when leaving Barcelona, Neymar Jr. is one of the best players in the world. Without a doubt. As we said earlier he’s just entering his prime and has plenty of goals and wins in his future. And when those come, so will the profits.