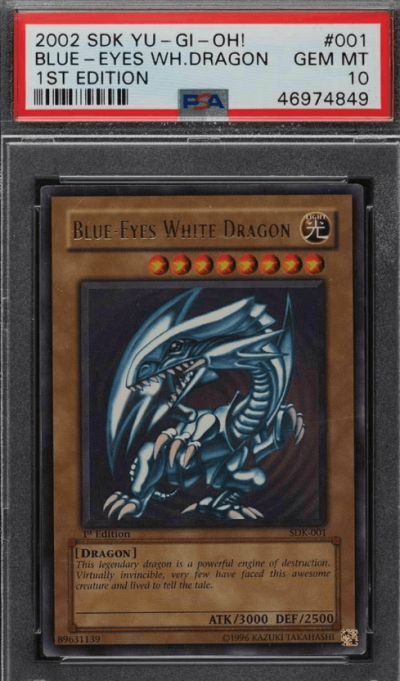 Looking for the most expensive YuGiOh card on the planet? You’re in the right spot. We’re going to do our best to review some of the highest priced YuGiOh cards ever sold. And with the YuGiOh market seemingly alive and well, what better time to take a look at some of those ultra-rare (and incredibly valuable) cards.

We’ll start with some truly insane values and work our way down to more reasonably priced editions. While these are the most valuable YuGiOh card the world has to offer, there should be some options that the average investor can afford to take a chance on. Of course, if you really know what you’re doing, it may not be much of a risk at all!

5 Most Expensive YuGiOh Cards In Existence 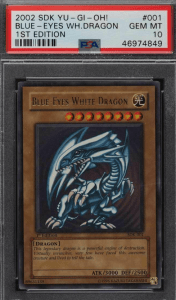 Wow. A recent sale on eBay is truly shocking. Ready? That makes one of us because we’re not. $85,100. What on earth? Truly amazing. That’s in the territory of some of the most valuable LeBron James cards ever sold. That dragon sure must know how to ball. Now to be fair, that was for a First Edition LOB PSA 10 gem mint. Don’t have $80,000 lying under your couch cushions? A PSA 9 will only cost you around $15,000. 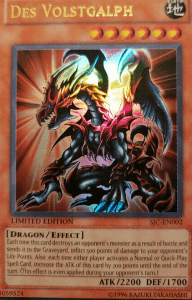 An ungraded version of this super rare dragon-like fiend sold for almost $10,000 recently. Can you imagine the price it would have commanded if it were a 10 grade? Let’s just say the Blue-Eyes Dragon would have had a run for its money for the title of most valuable YuGiOh sold in recent years. 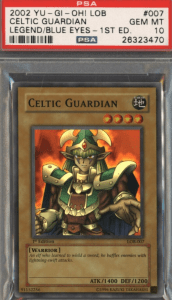 This one is up there on the list because there is a rare misprint of the card that can send buyers into a frenzy to the tune of almost $5,000. However, the regular 1st Edition card is still capable of cashing in for over $1,000 as a gem mint. Easily one of the most expensive YuGiOh cards in existence. The good news is, we’re starting to get into the territory of a reasonable investment. 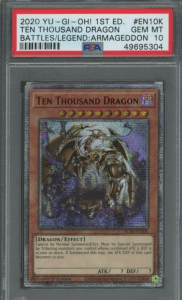 A rare find that is making a big splash on the scene. Just take a look at this behemoth and you’ll see why it’s able to capture the imagination of the beholder. In addition to looks, it has plenty of value. For instance, a grade 10 recently sold for over $3,000 at an eBay auction.

Even brand new ungraded cards are gonna cost you at least $1,500 if you’re serious about the endeavor. Truly one of the most valuable YuGiOh cards in the universe.

Top 3 Most Valuable YuGiOh Cards On a Budget

One of the most popular YuGiOh cards for serious investors. The 1st editions are easily gonna bring in $2,000. The card has so much staying power even newer edition cards can sell for at least $500. A mainstay. By the way, the rare Magician Force variation has a value approaching $3,000. Gulp. One of the most expesnive YuGiOh card options out there. 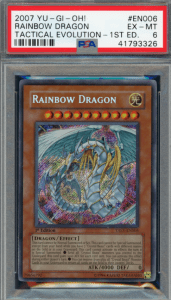 Perhaps not as intimidating as the other dragons we’ve encountered so far but a true force of nature nevertheless. There’s a rare misprint floating around that seems to be selling between $2,000 and $3,000. Additionally, a 2007 1st Edition PSA 9 recently went of nearly $1,000. Dragon power. 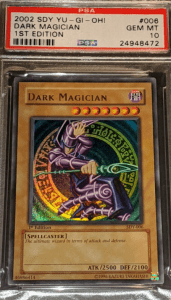 Nowhere near as popular as its Dark Magician Girl counterpart, it still makes the list as one of the most insanely valuable Yugioh cards sold in recent years. Just recently a grade 10 recently sold for over $2,3o0. However, they don’t seem to pop up all that often so if you see one, you know what to do. 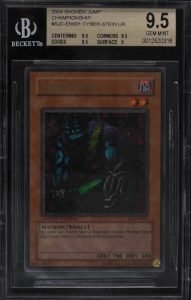 This gruesome fellow is a Champion and he’s not afraid to let you know it. He’s also not afraid to demand a hefty price of anyone who wants him as a new member of their most valuable YuGiOh card collection. But just how hefty?

As with all cards, it all comes down to condition. For instance, the card shown above sold for as high as $20,100 at a recent eBay auction. Meanwhile, a more beat-up version (BGS 8.5) only brought in $14,400. Still, not too bad for a full grade lower. 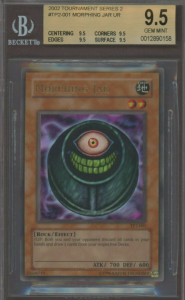 An eerie little card that causes both players to turn over their hands can’t be left off our Most Valuable YuGiOh Cards list. As you can see, the card features a crazy looking eye sitting on top of a sinister smile. Equipped with 700 attack and 600 defense, this little bugger is NOT to be taken lightly.

However, even more startling that its looks is the Morphing Jar’s extreme value. The BGS 9.5 shown here recently sold for well over $6,000. Just imagine what a perfect 10 would net. Safe to say you’re sitting pretty if you happen to own one of these that’s in good condition.

Are common Yugioh cards worth money?

Sure, everything has a price! That said, they are nowhere near as valuable as the ones on this list. While the monetary value is limited, for many players across the globe, they certainly have PLENTY of sentimental value. Just don’t expect 3 figures (or much of anything) when you list that common!

Most Expensive YuGiOh Card Ever Listed For Sale

While we can’t track down any sales figures, this card is without a doubt the most expensive YuGiOh card to be put up for sale. That we’re aware of anyways. This tourney edition Blue-Eyes Dragon went up for sale in 2018 for a mind-blowing $400,000. Needless to say there weren’t many folks who could come up with that kind of cash. Even for such an amazing card. Eitehr way, one for the record books.

Our Favorites From the YuGiOh First Edition Card List

Ancient Lamp – This guy is is not only ancient but also a LAMP. Sounds like a winner to us all day long! While not the most valuable YuGIOh card by any means, certainly one that has captured the minds and hearts of fans throughout the decades. Must own!

Basic Insect – The name is a bit deceiving because there is nothing BASIC about this little critter. A scuzzy little guy with a knack for mischief and subversion. While we’re not sure how he stacks up in the actual game, we can’t help love the bottled up mayhem this basic insect represents.

Dark Hole – Not sure why they didn’t just call it a black hole as judging by the card photo that’s what YuGiOh is going for. At any rate, it’s hard to get any more powerful than the most unstoppable force in the universe. Watch out or this card could very well suck you past it’s event horizon!

New to sports card collecting? Check out the most valuable baseball cards of the 80s and 90s!

Most Expensive YuGiOh Card Of All Time

The tournament edition Black Luster Solider was given away as a prize at a tournament in 1999 is reportedly worth MILLIONS. Wow. Just think of what it’d bring in today!  Anyways, the card  would easily THE MOST expensive YuGiOh card of all time if it ever sold. So far now many would argue that the Blue-Eyes Dragon actually reigns supreme as the most expensive card. Either way, we’re certainly not in the market for either!

When using the PSA database it’s easy to see which are truly the most expensive YuGiOh cards. As we mentioned earlier the Blue Eyes Dragon sold for over $80,000 in 2020 as a PSA 10. Another staggering price to behold was the May 2021 sale price that exceeding $50,000. Without a doubt the card is a true force to be reckoned with. To say the least.

Find the most expensive cards on the YuGiOh First Edition List!

First a disclaimer: We are by no means YuGiOh enthusiasts. At the same time, we have always been intrigued by this market. Very much so. Any collector’s item that can command pirces like these has to be taken seriously. At any rate, we have no skin in the game and do not plan on having any in the near future. That said, here is our two cents based on the limited knowledge we have. As you can tell by browsing the blog, we are primarily focused on investing in baseball, football, hockey, and basketball cards. So feel free to correct us where we’ve been wrong!

The cards we’ve listed seem to be industry stalwarts. Meaning, they’re not going anywhere anytime soon. So given that, and judging by recent sales, this doesn’t appear to be a losing investment. Go with caution and watch the market. If you like what you see hold a bit longer. If not, cut your losses. It seems to be a game worth playing though (both in investing and just playing Yugioh in general!). 7/10

The popularity of the game and other forms of Japanese media seems to be gaining traction in the US market over the past couple of decades. Not to mention the rise of Netflix is doing its part to boost the popularity of shows like Castlevania (although we much prefer the video games). If you’re making a medium term play you’re hoping that trend continues over the next 5 years. And it very well may. 8/10

If you’re holding for the long haul you’ve gotta be hoping this thing becomes a true rival to Pokemon. If such a thing happens, you’ll be sitting pretty. Will it? We have ZERO clue and wouldn’t tie up our money waiting to find out. Just be glad to get out with some profits in the short to medium term. But like we said earlier, we focus on sports cards so please take it all with a massive grain of salt (preferably pink Himalayan). 2/10