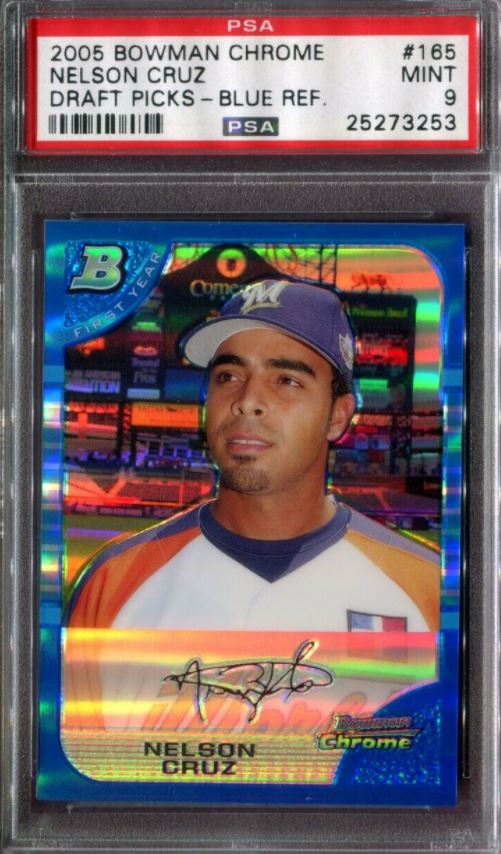 If you’re looking for a Nelson Cruz rookie card you’re going to have to go back a looong way. And since he didn’t become the player we know today until he was about 33 years old, you’ll need to go back longer than you’d think. While Cruz was always an okay player, it wasn’t until 2014 when he erupted for 40 home runs that he became the offensive juggernaut we’ve seen for the past 7 seasons. And if you thought he was going to slow down now that he’s officially 40 years old, think again. In 2021, Cruz once again sits atop the leader boards in home runs with 8 on the young season and has a sparkling .300 average to go along with it.

What Nelson Cruz such a special player isn’t the number of years he’s spent in the league or the number of teams that he’s played for throughout his career. Nope, it’s the unreal production he’s harnessed past the age of 35. MLB.com says it’s best by asserting that Cruz’s old-man performance it’s nearly UNMATCHED. And with this year being his seventeenth season in the league, you may wonder how long Cruz has left before the hands of time finally catch up to him. We for one are done playing that game as it has burnt us in about every fantasy draft we’ve participated in over the past 5 years (except for this last one that is!).

Now, when it comes to Nelson Cruz rookie cards they’re not nearly as highly-priced as you would think. Not for a guy who has shown this level of sustained production. And while we can’t help but feel it’s kind of a diss to what he’s accomplished in the latter part of his career, we certainly don’t mind picking up the following cards on the cheap!

While Nelson Cruz may be in the twilight of his career this Twins teammate of his certainly isn’t…. 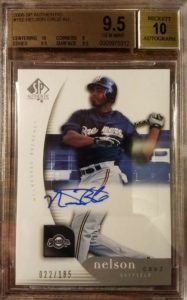 As you may have been able to guess by the name, this baseball card includes Nelson Cruz’s autograph which of course increases the value of the card overall. It also exhibits flashy card art with a silver background so you don’t have to worry about this being some boring old card. Looking further into the details, Cruz is in action taking a swing. Possibly hitting a home run out of the park, or possibly striking out to complete his first-ever platinum sombrero for all we know. Either way, the photo makes for a great-looking card. When it comes to value, you should be able to find this one for somewhere in the $100 to $300 range depending on the condition. 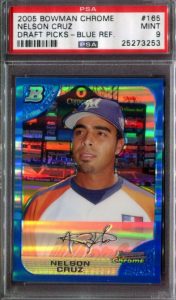 Next on our list we have a name you should be incredibly familiar with. None other than Bowman Chrome Draft. Yes, they were around back then. In fact, this year is actually special in the history of Bowman Chrome as 2005 is the last season they lumped prospects and rookies into one category.  At any rate, this Nelson Cruz rookie card doesn’t show him taking a massive swing or running the bases. Nope, just a simple picture of Cruz staring off into the sunset. Or seeing how it’s a card that symbolizes the start of his great career, he’s probably staring off into the sun-RISE ready to get the party started! Anyways, this one of the most valuable first-year Cruz cards you’ll find. That said, even the 1/1 refractor is valued at less than $700. Talk about a bargain. 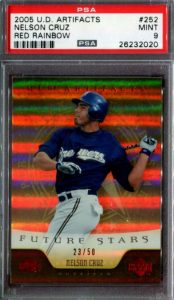 Seeing how long ago Cruz’s rookie year was we just had to include the Upper Deck “Artifact” card. This one makes for the most casual investment on the list (even though they are all pretty much are at these prices) as many are available for less than $50. Even the rare /50 Red Rainbow shown above is well under $200. You know what to do!

Speaking of guys who could still mash past the age of 40…..

If Cruz continues to rake all season and caps off another monster year at the age of 40 you’re going to be in good shape by September or October. The good numbers alone should be enough but at some point, more people are going to start taking notice of what this guy is doing in the twilight of his career. 8/10

Cruz’s retirement from the game may happen in this time frame and that should certainly draw attention to the Nelson Cruz rookie card market. And the way he’s going, that likely won’t happen before at least one or two more monster seasons. 8/10

Due to his almost forgotten past with performance enhancers, Cruz probably won’t end up in the Hall of Fame. However, at some point, collectors are going to start showing this guy the love he deserves. And when they do, expect a dramatic increase in the value of these cards. Just keep your eyes peeled for that opening if you’re looking to go long-term. 8/10