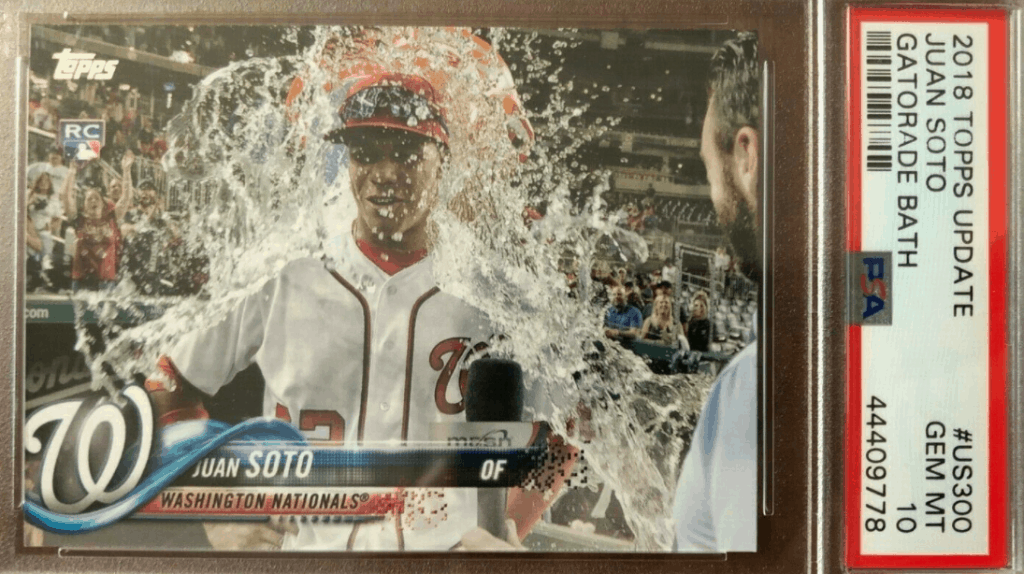 If you’re on the hunt for a Juan Soto rookie card, there’s no shortage of options to choose from. So how do you go about finding the right card? As always, the first thing you’ll likely consider is how much you’re willing to spend. That’s why we’re about to provide a quick Juan Soto rookie card rundown. We’ll start with some options that are for SERIOUS investors/traders only and end with cards for the everyday hobbyist. But first, let’s find out why everyone seems to be going all-in on Juan Soto.

Need a laugh to help you through the gloomier days of fall and winter? Check out our funniest baseball cards of all time list!

Some players just aren’t long for the world of minor league baseball. Juan Soto was one of these players. While the power wasn’t there in the beginning, the kid straight EMBARRASSED pitchers in Class A baseball with his pure hitting ability. Over the course of his first 2 seasons in the minors, Soto made it look easy by hitting .368 his first year and .351 his second. Impressive to say the least.

But it wasn’t until 2018 that Soto showed his true phenom potential. After a blistering start in the Class A leagues, Soto quickly found himself making AA pitchers look silly as well. By the time he forced an MLB call up, Soto had hit 14 home runs over 152 at-bats and driven in 52 runs to go along with a .362/.462/.757 slash. Oh, and by the way, those numbers also added up to an absurd 1.218 OPS. Hello Washington.

After making a mockery of pitchers in the A and AA, it was time for the 19-year-old Soto to do the same against major league pitching. In his first 2 seasons in the majors, Juan has established himself as one of the game’s very best. In 2018 Soto slashed .292./.406/.517 and would have won rookie of the year honors if not for fellow phenom Ronald Acuna. And by 2019 he proved he was ready to throw his name into the MVP discussion by following up with 34 home runs and a .949 OPS (ended up finishing 9th).

Which brings us to the pandemic shortened 2020 season. One may expect that an awkward, shortened season may cause a lull in Soto’s performance. Just look at what it did to Christian Yelich. But Soto proved once again that is in fact FOR REAL. Al the third year phenom did was have his best year at the plate ever with career highs in average (.351) OBP (.490) slugging (.695) and OPS (1.185). Wow. Oh and by the way, he was well on pace to shatter his best home run total had he gotten a full season of at-bats.

By now it should be clear what kind of player Juan Soto is and why you should take interest in his rookie cards. So let’s cut the suspense and see what’s waiting! 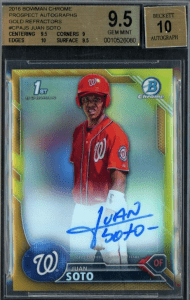 While not a “true” Juan Soto rookie card, the 2016 Bowman Chrome certainly appears to be the most valuable. The card captures Soto’s minor league days and comes in a variety of styles. If you want a grade 10 that also happens to be a refractor with an autograph, be prepared to shell out some serious cash. 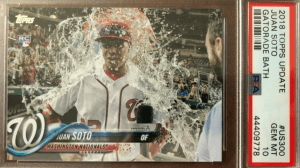 A card that features Juan Soto in that beautiful batter’s stance. Value depends on the style of card/autograph status and can get out of hand QUICKLY. Some of the most valuable versions are the Memorial Day Camo, the Gold, and the Black Label. 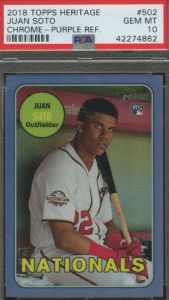 We almost stuck this in the high-end category because of the one signed in red ink (it’s really valuable). However, if you get one signed in normal blue ink or a refractor with no signature, you’re staring at a nice middle-tier card. 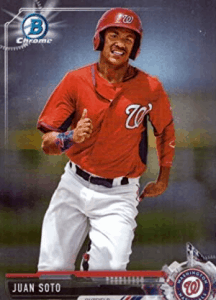 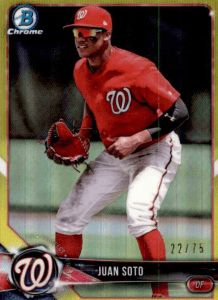 While they’re not as costly as the 2016 version, the 2017 and 2018 Bowman Chrome Juan Soto rookie cards are still no laughing matter. Especially if you get one back from Beckett grading service with a perfect 10 grade. 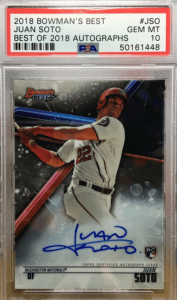 Often thought of as the poor man’s Bowman’s Chrome, the Bowman’s Best set sometimes gets overlooked. Well, in this case, it shouldn’t be. There’s plenty of Juan Soto rookie card options in this set that have the ability to bring in between $500 and $1,000 if they’re in mint condition or better. 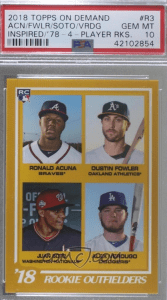 Juan Soto, Ronald Acuna, Alex Verdugo, Dustin Fowler, what’s not to like here? Two are already MVP caliber and Verdugo appears ready for a breakout. C’mon Fowler, we know you can do it! 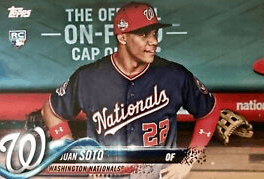 Just a simple card showing Juan Soto relaxing in the dugout with his hands on his hips. Unlike the first version we talked about, this one won’t set you back thousands of dollars.

More of a vintage collector? Check out these Gary Sheffield rookie card options!

Given his track record, it seems inevitable that 2021 will be another monster season for Soto. And based on what he did in the shortened 2020 season, it could be his best. If that happens you should have plenty of opportunities to sell for some big-time gains. 9.5/10

Imagine what this kid is going to do once he gets into his prime. Watch out. The way things are shaping up, he’ll be a perennial MVP contender. Add some key pieces over the course of the next few years and the Nats should be back as World Series contenders. The mix of personal and team achievements looks really good over the next 5 years. 10/10

Just like the career of the incredibly talented outfielder, it appears the Juan Soto rookie card market is just getting started. With every award and accolade, expect value-added to your investment.  At age 22 (happy birthday by the way Juan!) he’s already got a World Series under his belt. What happens if he adds another along with a National League MVP? Or multiple of both. These are possibilities that are easy to imagine for a talent like Soto. If not easy to EXPECT. 10/10