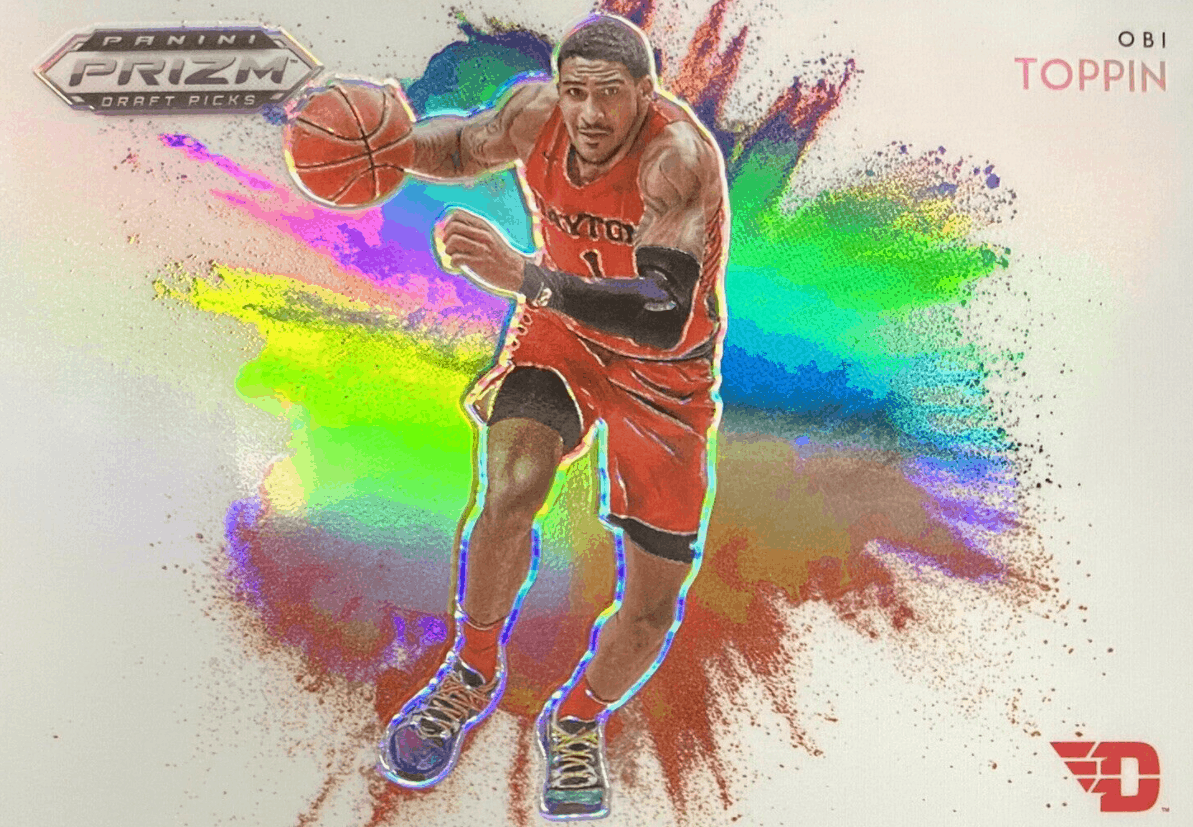 If you’re on the hunt for an Obi Toppin rookie card, join the club. He’s one of the most talented rookies entering the league this year and he’s playing in the Big Apple. Safe to say there’s plenty of people looking to take a dip into Obi’s first-year card market. Or at the very least an experimental wade.

Now at this point, there won’t be many TRUE rookie card options available since the ones that’ll feature Obi in his Knicks uniform still haven’t hit the shelves. However, whether or you consider the “Draft Picks” or other pre-draft sets to be “true” rookie cards, we still count them as such! That said, let’s take a look at all of the early market Obi Toppin rookie card options out there so far.

Random thought of the day: At some point, someone has to make a card of Obi Toppin with a lightsaber, RIGHT?? 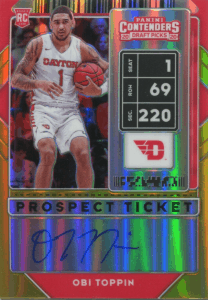 Some of the most valuable pre-draft Obi cards will be from this set. With the many different “Tickets”, photo options, and Prizm choices the possibilities are nearly endless. Find one in a price range you’re comfortable with and go for it. High-end purchases can easily exceed $3,000. However, plenty of great choices for well under $1,000. There’s plenty of reason to think it’ll be worth your while regardless of what you spend. 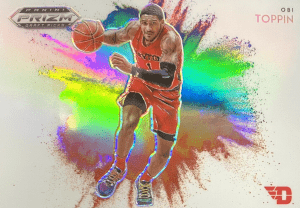 A set that serves as a precursor to the much anticipated 2020-21 Panini Prizm Basketball regular set. An incredibly excited precursor, that is. While it may not draw the attention of the flagship set, it offers an early look at all of the exciting big-name draft picks. And of course, Obi Toppin is one of them. When all said and done the set has similar values to that of the Comntendwers we just talked about. We prefer the Color Blast insert shown above! 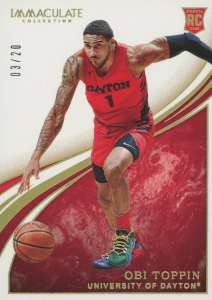 A perfect rollout of cards for those of you who like to go conservative when it comes to investing in rookies. All kinds of options here for less than $100. Want to throw a little more at it? Look for a patch. We like the “hat top” material! Although it’d be a lot cooler if it was “top hat” a material patch. 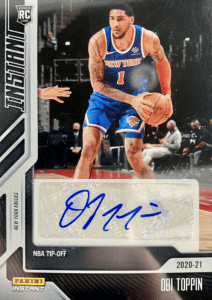 One of the first sets to hit the shelves that feature Obi in his New York Knicks uniform. Now, this is certainly no fashion blog, but we can’t help but opine that the Blue and Orange look like a perfect fit for Obi. At any rate, there’s a wide array of values within the set for Obi Toppin rookie cards. For example, the Black Prizm 1/1 Tip-Off Auto shown above is one of the most valuable going for around $1,500 at the moment. Meanwhile, you can get one of the lesser parallels for well under $100. Not a bad set to open up to TRUE rookie card season.

What about the rest?

You’ll see them soon enough. Patience is the key! Many of the flagship sets will begin rolling out over the coming weeks and months. The good news is you have these amazing sets featured here to hold you over. Who knows, you may end up liking the appetizer more than the feast! Here are some key release dates to look forwards to:

We’ll update this post with our reviews of the regular season sets as they become available.

Want a 2021 NBA rookie that’s even more sought after than Obi? Take a look at the LaMelo Ball rookie card market!

There sure is lots of upside here. But there’s also plenty of risk. If you plan on buying one of the options above, consider before the season ends if you’re seeing a decent profit opportunity. However, if you’re not afraid to gamble, hold throughout the season and hope he plays up to his Rookie of the Year potential. If he does, your margins will be WAY nicer than flipping before the season is over.

We think Obi will go on to have a fine NBA career. However, it’s incredibly hard to tell if it will be any better than just “fine”. Go in with a short term mindset and change courses if you like what you see. Good or bad, the correct path should reveal itself at some point next season.

If we’re not in a medium-term mindset we’re certainly not in a long term one. As we just said, there’s nothing wrong with finding out what kind of player Obi is before you start thinking this far ahead.