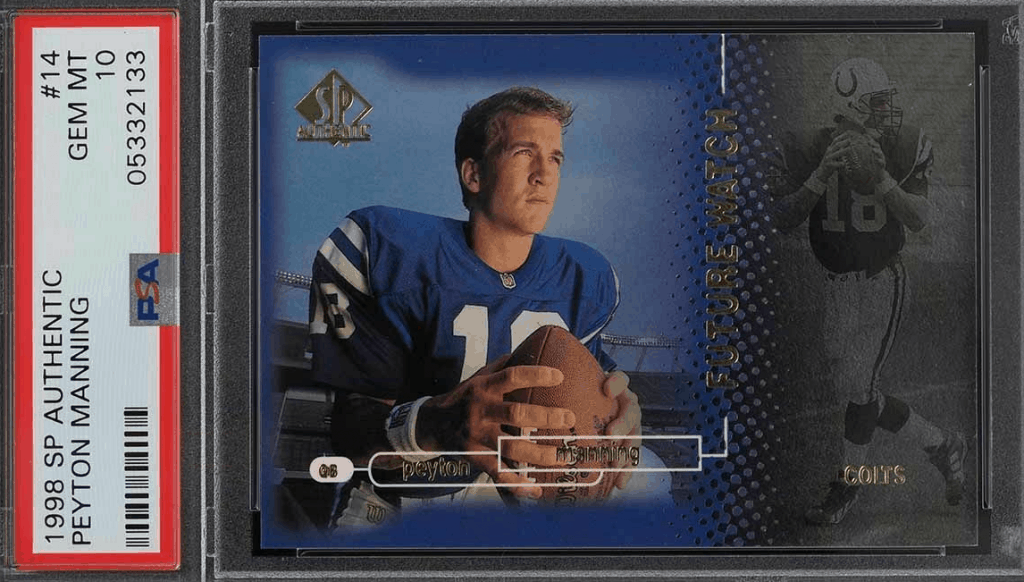 Although Manning won a Super Bowl and had the best year of his career as a Bronco, he’ll always be remembered as the face of the Indianapolis Colts. So much to the delight of Indianapolis fans, for this post, we’ll only focus only on Peyton Manning rookie cards. But before we get into the 4 we like best, let’s take a moment to appreciate the best regular-season quarterback to ever play! We know the last statement is controversial, but we like to stir the pot.

As we’ve already eluded to, Peyton Manning is right at the top of the “greatest quarterback of all time” debate. The former Indianapolis Colt and Denver Bronco was a mastermind under center for nearly two decades in the National Football League. Manning rewrote history for a large portion of his career, setting records that would only be eclipsed by the seemingly ageless Drew Brees and Tom Brady. Here’s a brief insight into the legend that is Peyton Manning.

The Career That Made Peyton Manning Rookie Cards Valuable

Before Manning was even old enough to sign up for a football team, he was in New Orleans watching his father, Archie Manning play. He and his brother Eli watched their father play on a Saints team whose fans wore bags over their heads because they couldn’t bear to watch what was happening on the field.

When Peyton got to high school, he began to make a name for himself, being named National Player of the Year by the Gatorade Circle of Champions. So it comes as no surprise that it wasn’t long before the top colleges in the nation were coming after Peyton, hoping they could sign him to be their next quarterback.

Manning had the opportunity to choose from Florida, FSU, LSU, Michigan, Texas, Texas A&M, and his father’s alma mater Ole Miss. In the end, Manning had his heart set on being a Tennessee Vol. Although he began his freshman season as a third-string QB, Manning was named the starting quarterback of the Vols by week five.

By the time Manning was done at Tennessee, he was a Consensus All-American and won the Maxwell Award and Campbell Trophy. In addition to those awards, he was robbed of the most coveted of all, the Heisman. Manning declared for the NFL Draft and was selected first overall by the Colts in 1998. Peyton won a Super Bowl and dozens of awards during his time in Indy. He won four MVP Awards, went to a dozen Pro Bowls, was the Super Bowl MVP, and was a five-time First-Team All-Pro. Manning also took home the prestigious Walter Payton Man of the Year Award. The list goes on and on and on.

After career-threatening neck surgeries, Manning switched teams in 2012 and became a Denver Bronco. In four seasons with Denver, Manning won another Super Bowl, another MVP, went to three Pro Bowl games, was the Sports Illustrated Man of the Year, and won the NFL’s Comeback Player of the Year award. However, Manning eventually succumbed to the neck injury that robbed him of his arm strength and retired after his Super Bowl 50 victory. Although, some may say Von Miller and the Broncos defense won that game! 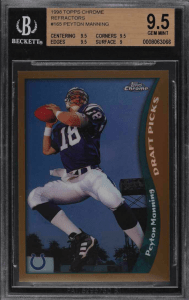 This is a great design from Topps with Peyton Manning dropping back in the pocket. The shot is taken from underneath him, making for a unique presentation. He’s donning the classic blue Colts uniform that we all came to know so well over the years. This Draft Picks edition card has a wide array of prices depending on the variation. Some of the more common can be picked up by the casual investor for a few bucks. However, one of the incredibly rare variations in mint condition can be worth well over $10,000. 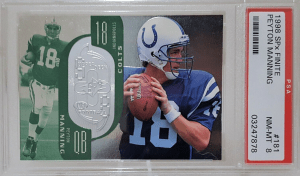 This is considered to be one of the most attractive sets for Peyton Manning rookie cards. The set has a few different variations, from one with a big shiny ornate foil design sprawled across the front to another with a more subdued horizontal layout. It is considered one of the most sought after rookie cards that were made for Peyton Manning. When it comes to value, prices vary depending on the style of card, condition, and rarity. Rest assured, no matter what kind of investor you are, you’ll likely find something in your wheelhouse. 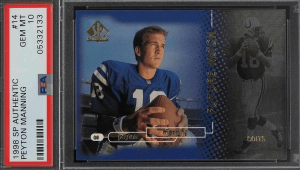 As with the previous set, there are a few different variations to choose from. But as it so happens, our favorite is easily the most valuable of the bunch. What can we say, we have expensive taste. The helmetless young Manning in front of that midnight blue backdrop says it all. He’s focused and ready to become an NFL legend! Speaking of legends, you’ll quickly find yourself becoming one within your inner circle of collecting buddies if you manage to get your hands on a gem mint! 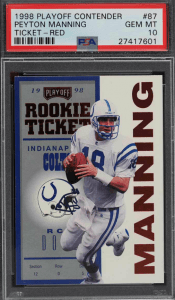 This is hands down, without a doubt one of the most valuable Peyton Manning rookie cards. Especially if you’re lucky enough to find one with Manning’s autograph scribbled across the bottom. The card shows Peyton gracefully rolling out of the pocket in his road uniform. Check that. Peyton Manning did nothing graceful when it came to pocket mobility! If you find yourself a bit short on cash for the autograph version of this card you can always opt to buy a reprint for around $10. Just don’t try to convince your buddies it’s an original. You’ll go from legend to laughing stock real quick!

We normally wouldn’t be thinking about a short term play for a retired player. HOWEVER, the 2021 Hall of Fame induction is less than a year away. And you know what the means. Peyton will be a first-ballot nomination. We expect a nice pop in value once that happens so getting in well ahead of the ceremony looks good from where we sit. 9

After the Hall of Fame nomination, we don’t see a whole lot that can drastically drive up the value of Peyton Manning rookie cards. Short of Manning coming back with a bionic neck and winning his third Super Bowl. There may be some gradual appreciation but overall nothing we’re excited about. 6

Peyton Manning is one of the greatest of all time and many would argue THE greatest of all time. He’s also part of a lineage of quarterbacks with both his father and brother being NFL talents. Who knows when we’ll see something like that again. Point is, Manning has solidified himself as one of the names you need to mention if you’re talking about the best players in the NFL’s rich history. Something that makes a long term Peyton Manning rookie card play incredibly attractive. 9.5

Check out our list of the most valuable Aaron Rodgers cards!