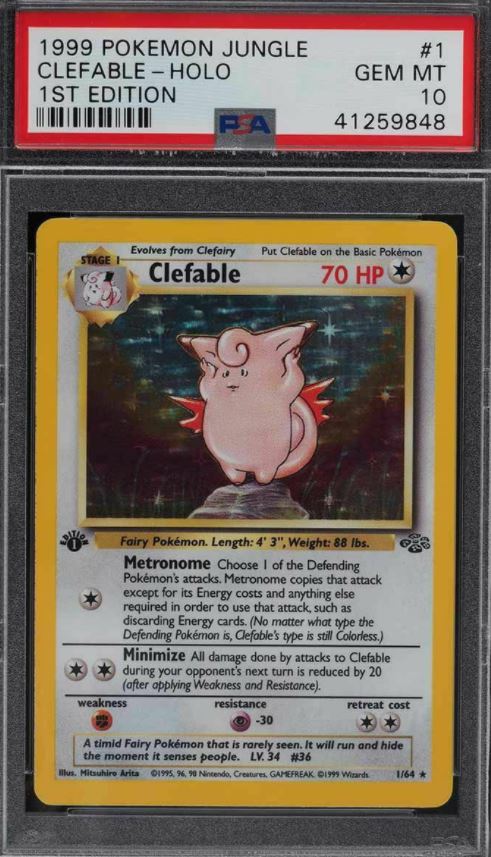 While it’s been over 2 decades since its release, the 1999 1st Edition Pokemon Jungle Booster Pack remains an incredibly sought-after item. And why wouldn’t it be? When buying a pack you’ll have a chance to pull cards that feature some highly collectible, not to mention highly valuable, little creatures.

As far as how much you’ll need to spend to own one, please beware they don’t come cheap. However, a rare case hit could make it well worth your time. And money. Let’s take a closer look!

Related Content:  Ultimate Guide to the Most Valuable YuGiOh Cards 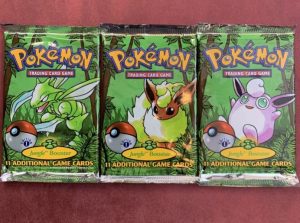 A lot goes into the value of an opened pack, but one of the main contributing factors is the pack’s weight. For instance, a pack weighing 21 grams may have a valuable holo card making it more expensive to purchase. Meanwhile, packs weighing far less (or that haven’t been weighed at all) will hold less value. Overall, you can expect to pay between $100 and $500 for an opened pack. The question is whether or not to open it??

Below are examples of some incredibly valuable cards that you could find in your pack. If you’re on the fence on whether to stash your pack away for long-term gains or tear it open immediately after purchasing, cards like these are something you MUST consider. Please note: The values we’ve listed for the following cards are based on the highest grade PSA 10. Cards in lesser condition are often available for MUCH lower prices so don’t let the values here scare you if you’re looking to invest in a Pokemon Jungle card. 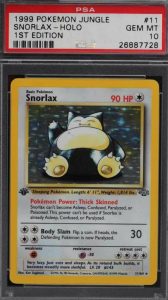 A rotund behemoth who just sleeps and eats the day away. Despite his sloth-like ways, Snorlax has a pretty useful “Thick Skinned” power that prevents sleep, confusion, and paralysis. However, even more impressive is the value of his 1st Editon Jungle Holo card. Currently, you’ll need to buck up well over $10,000 if you want to get your hands on a PSA 10. 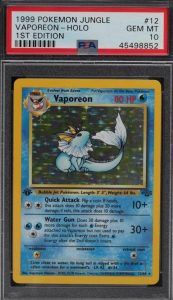 While much smaller than the previous creature, Vaporeon makes up for it with his powerful quick-strike ability. Additionally, this slimy little guy has a water attack that can do some real damage as well. He can also do some real damage to your bankroll. Want a PSA 10? Be prepared to shell out nearly $10,000. A steep price to pay but it could be well worth it. 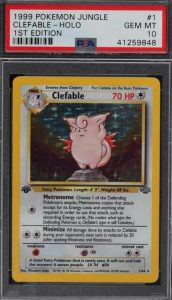 A shy guy who is rarely seen as he likes to hide the minute he senses people nearby. Just like Clefable himself, this card is very rare. If you’re lucky enough to find one in your Pokemon Jungle Booster pack you could be sitting on $5,000 or more. 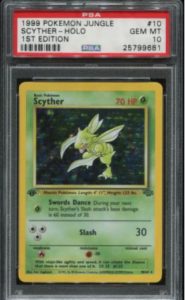 Scyther is a fierce slasher who has great speed and agility. Famous for his “Sword Dance” ability that doubles the damage of his attack. While not as valuable as the previous cards, a Scyther Holo will still cost you over $1,000 if you want one in mint condition or higher. 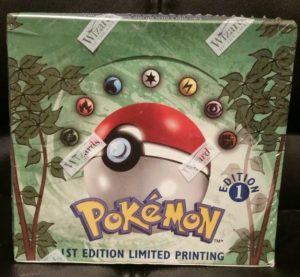 If you’re REALLY serious about catching them all, you’ll want to consider picking up a 1st Edition Pokemon Jungle Booster Box. However, such a decision will take some SERIOUS consideration due to how much these things can cost. For instance, one recently sold on eBay for over $20,000. Wow. New card or Pokemon? Tough decision!

How many Pokemon Jungle Booster packs come in a box?

Each Booster Box includes a whopping 36 packs. Just think about how many chances you’ll have to score one of those rare holos! If you buy a Booster Box you can expect to pull out plenty of them as there’s a 33% chance you’ll get one in each pack. With those odds, you’d have to have the worst luck in the world if you didn’t pull out a few rare Pokemon cards.

How many Pokemon Jungle Booster cards in a pack?

Great question! After all, the more cards the more chances you have to find that rare and valuable Pokemon. Each pack contains 11 cards so in a full box you’ll receive 396 cards total. There are only 64 total cards in the set so you’ll have plenty of chances to get a large portion of the collection in just one box. Of course, you should expect to find way more of the common cards so there will be plenty of duplicates.

This is the more conservative strategy as you don’t run the risk of getting a truly miserable break. In such a scenario, the total value of all the cards from the box would fall short of what you paid for it. Well short in the seriously unlucky cases. However, if you never open the box the value depends on appreciation/depreciation alone. It’s hard to judge how the market will go but a Pokemon Jungle Booster Box was far less valuable just 4 years ago. As we wrote earlier, they can bring in well over $20,000 now. Just think about that profit potential!

While you run the risk of getting skunked, you could also get an INSANE box break. Just imagine if you loaded up on holographic cards and got them back from grading with plenty in mint condition. Safe to say the amount you spent on the box will pale in comparison to the total value of the cards you pulled out of those 36 Pokemon Jungle Booster Packs. Far riskier than holding onto a box without opening it. However, if you like the action, rip that thing open! Carefully.

Not satisfied with only a Pokemon Jungle Booster Pack?