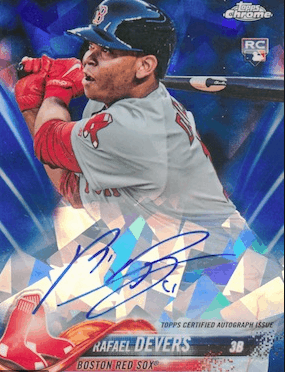 While he’s no longer batting in the middle of an explosive lineup, Rafael Devers isn’t going to forget how to swing the bat anytime soon. He’s done it all throughout his minor league career and it didn’t take him to start beating up on MLB pitchers as well ( .311/.361/.916 triple-slash to go along with 32 round-trippers in his first full season). So just because he may not have much of a supporting cast this year, doesn’t mean you should turn your back on a Rafael Devers rookie card investment. In fact, the Red Sox rebuilding era may be a perfect time to buy first-year Devers cards while they aren’t getting much attention. Here are a few we like! 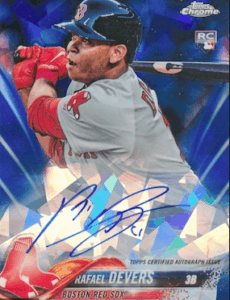 This beauty can generate a selling price that’s just as attractive as that previously mentioned triple-slash line. Do yourself a favor and find one with an autograph on it to add some additional value. While you’re at it, go ahead and seek out that red refractor. 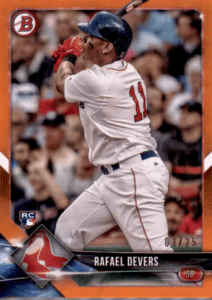 If we’re talking modern rookie cards, it almost a guarantee the name Bowman shows up on the list. The 2018 Bowman Chrome Rafael Devers rookie card features what appears to be a triumphant home run swing (although it could be a lazy fly ball for all we know). Grab it with an autograph, a refactor tag, or just plain (like yogurt without the fruit at the bottom). Either way, you’ll be glad you did if this soon-to-be baseball elite continues his current trajectory. 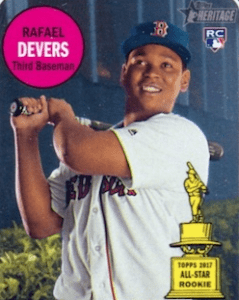 Throw it back to the days when posing for a baseball card was the name of the game. Rafael’s calm smile and a skyward gaze set this card apart from the modern-day action cards you normally see on the market. There are plenty of options with varying values but overall this is a great play for moderate investors. 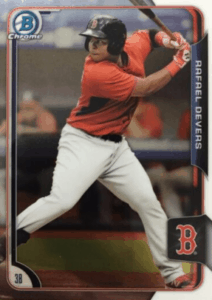 It’s no surprise to see Bowman make another appearance on this list. Let’s not forget, before Rafael Devers was a rookie he was a top prospect. This one features a young Rafael showing his “eye of the tiger” at the plate. As always, grab the autograph and refractor tint if you have a few extra bucks lying around. 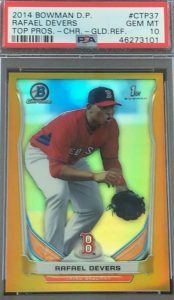 You’d assume that Dever’s 1st Bowman would be his most collectible card but it’s a close call between this one and the 2015 prospect card. Either way, they’re both great cards to look at if you’re thinking about a sizeable investment so you really can’t go wrong no matter which way you go. And if you really have a hard time deciding just remember there’s no shame going with whatever one has a cooler photo! 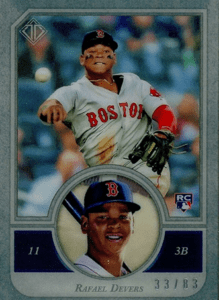 The 2018 Topps Transcendent rounds out the list (a list that’s completely DOMINATED by Topps and Bowman).  Finally, a card that shows off a bit of Devers’ improving (work in progress) defensive skill set.  With moves like those, all he needs is a red eye-sash and one could EASILY mistake him for the ninja turtle that shares his name.

Ya gotta have plenty of confidence in anyone who can hit .311 with over 30 home runs across a full season of ball. Another big season should lead to some decent profits on a short-term play if you sell at the right point. 7/10

Boston has been one of the most successful MLB franchises over the past 2 decades. Therefore, you can confident they won’t be down for long. So be just as confident as you accumulate these and other Rafael Devers rookie cards while they’re taking a snooze. At some point, the Red Sox will be back in contention and Devers will be the spark plug. So sit back, pick one up here and there, and wait for it for the sparks to fly. Grab enough of this low-hanging fruit and chances are you’ll be moving out of the accumulation phase and into the profit-taking phase in a BIG way. 8.5/10