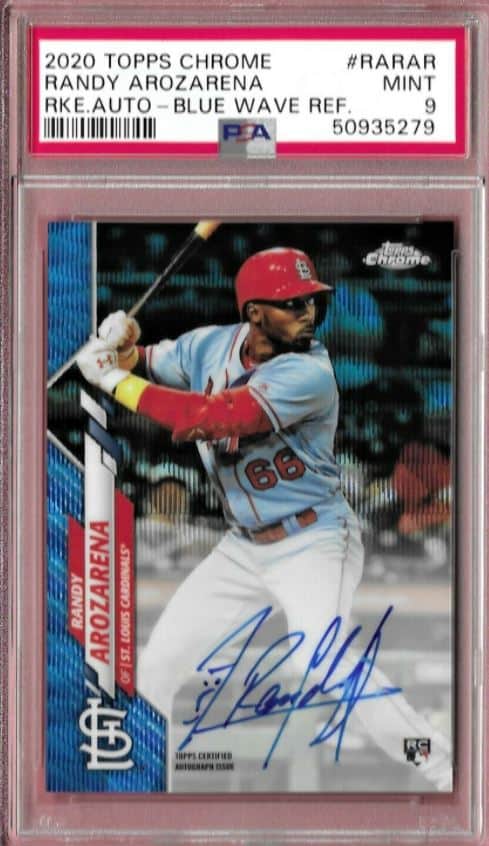 After watching what he did to opposing pitching in the 2020 MLB post-season, there are going to be plenty of investors looking to add a Randy Arozarena rookie card or two to their collection. Can’t say that we’d blame them! Randy landed in Tampa Bay after being traded away from a Cardinals team that never gave him a reasonable chance (couldn’t possibly get playing time with an outfield crowded with super-stars like Dexter Fowler, Harrison Bader, and Tyler O’Neill – LOL!). And boy did Randy make the Cards feel some seller’s remorse by hitting 7 home runs in only 64 at-bats once he made his debut with the Rays.

But it was that epic post-season that people really turned some heads. In a run that saw the Rays fall just short of a World Series victory, Arozarena crushed 10 home runs, hit over .350, and put up an OPS of more than 1.200. Insane. Oh and he snagged an ALCS MVP along the way. While that playoff performance may have put Randy on the radar of most baseball fans, he’s still considered a rookie going into 2021. And guess what? Many pundits and oddsmakers have him as the favorite to win the AL Rookie of the Year award. Sold on the kid yet? If so, here are some Randy Arozarena rookie card options for your 2021 baseball card investment portfolio. 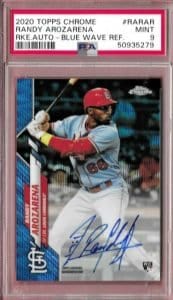 When it comes to true baseball rookie cards, it’s hard to beat Topps Chrome. While Bowman Chrome may be found at the top of many of our rookie card reviews, it’s only because most big-name rookies have “prospect cards” from the Chrome Draft set. And when it comes to baseball prospects, Bowman Chrome is the undisputed KING. However, since the unheralded Arozarena didn’t have a Chrome Draft card, Topps Chrome appears to be in control of the Randy Arozarena rookie card market.

As far as value goes, the Gold Wave and Red refractors are great higher-end investments in that $1,500 to $2,500 range. Meanwhile, throw a couple hundred on the more common purple refractor or an autographed base card if you’re not looking to break the bank. 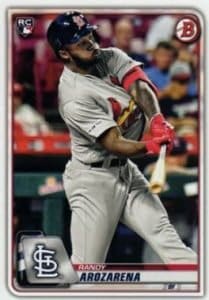 It’s not every day you find a potential Rookie of the Year candidate that doesn’t have a Bowman Chrome prospect card. However, this is the case with Arozarena. Talk about a rise out of obscurity. At any rate, this is his first Bowman card and it makes for a great addition to any collection. Values vary based on the parallel. Looking to go big? Trach down the lone Platinum or one of the Print Plate parallels. Meanwhile, the more common Blue Sky and Purple variations will cost you far less. All are great options that carry the weight of the Bowman name behind them. 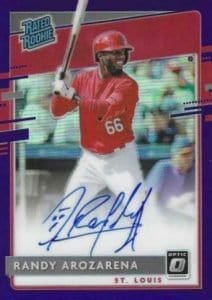 The best set we’ve listed here if you’re not looking to spend more than a few hundred bucks. Even the rare Green Prizm (print run of 5) should cost you less than $500 if it’s not graded. Meanwhile, you can pluck a Red Mojo or Black Prizm Auto off the market for less than $200. Oh, and by the way, the values for all of the cards we’ve mentioned are for autographed versions. Hard to beat! 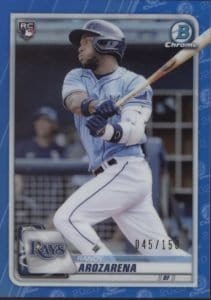 Great set for medium to higher-end investments with many options right around that $1,000 range such as the Orange Refractor. However, if you wanna scale it back a bit go for the Green or Purple refractors. Great cards that are available ungraded for a couple hundred bucks.

Another Cardinal prospect looking to make a splash in 2021: Check out or Dylan Carlson Rookie Card Hot List!

As we get closer to opening day 2021 more and more collectors are going to start remembering that insane October Arozarena had last season. Look for prices to continue to rise leading up to the beginning of the season. However, what happens after that greatly depends on what still unproven Arozarena does for an encore. Something we’re not as confident in. 8/10

Was last year a fluke or the start of something big? Hard to say. Going back to the minors, Randy has always been a productive hitter. However, the 17 home runs in less than 200 combined regular and post-season at-bats in 2020 are going to be really hard to replicate. While he may not go on to be a top 20 bat, we like his chances of being in the top 50 going forward. 7/10

As with many young players, we need to see more from Randy before we begin thinking this far down the road. He should have every opportunity in 2021 to answer the lingering questions about whether or not 2020 was just a rare hot streak. Let’s find out and go from there! 5/10