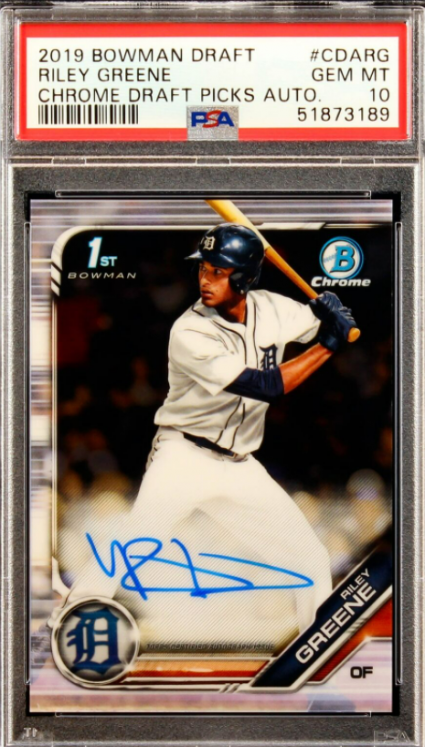 With the incredible 2021 he registered between AA and AAA in 2021, it’s no wonder the Riley Greene rookie card market is starting to draw some attention. In his first taste of advanced minor league ball, the former 5th overall draft pick crushed it to the tune of .301/.387/.534 triple slash across 485 at bats. Not too mention his 24 homeruns and .921 OPS. Oh, and for good measure he was also a monster on the base paths stealing 16 bags in 17 attempts. Impressive indeed.

So with a first round pedigree and a breakout to justify it, we’re expecting big things out of Detroit’s top prospect. And soon. So if that smooth left handed swing produces in the majors like it did in the minors? Expect big things from the following Riley Greene rookie cards!

2022 Rookie of the Year Alert: Check out these Adley Rutschman rookie cards! 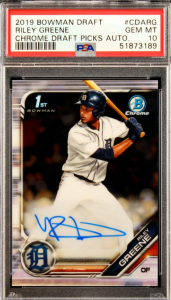 When it comes to baseball cards, it rarely get’s better than a “1st Bowman”. Bowman has lead the way in prospect cards for several years and few cards are as coveted as a player’s first appearance with the brand. Greene’s came in 2019 when he debuted in the 2019 Bowman Draft collection. The card shows off his spread out stance as he awaits the next delivery and is also available with Greene’s autograph.

While values vary depending on the card, some of the rarest of the collection have sold for well north of $1,000. Meanwhile, the base cards can sell for as high as $100 if in the right condition. 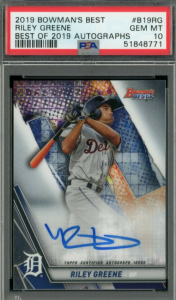 Bowman’s Best is another go-to collection if you’re on the hunt for prospect cards. While not as sought after as Chrome Draft, it offers plenty of great Riley Greene rookie cards at far lower prices. For instance, the PSA 10 autograph base card recently sold for less than $300. Compare that to the same condition of the Chrome Draft autograph version and you’ll save hundreds. If you’re looking for a solid card but don’t want to drop too much of the ole’ bankroll, here’s your play. 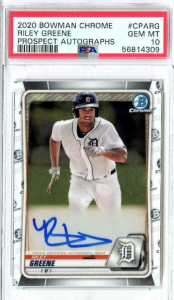 Not to be confused with Bowman Draft, the regular Chrome set from 2020 also features some great Riley Green prospect cards. Check out the one above. The card features Greene’s base running prowess as he hustles across the paths. As you can see, this set also features autographs with the base featured here valued somewhere around $300 as a PSA 10. In addition to the ink, also be on the lookout for some of the rare parallels. A great collection to target if you want to Chrome name but not the 2019 price tags.

Question of the Day: Who will be called up first Bobby Witt Jr. or Riley Greene?

When will we see some TRUE Riley Greene rookie cards?

As you know, the cards featured here are technically “prospect cards”. However, they’re usually the most sought after cards even after the ones with the RC label are released. That said, the true rookie cards shouldn’t be too far off. Many folks believe Greene will debut at some point in 2022. Therefore, we should start to see some RC labeled Riley Greene rookie cards before the end of the year as long as an injury doesn’t slow his call up.

As we just said, Greene should debut in 2022 so he’ll be one of the most collected prospects heading into the season. Look for prices to rise as we near opening day (whenever that may be) and level off as we await the inevitable call up. Once that happens, the market will shirt from being driven on speculation alone. An immediate impact in his rookie season should send your cad to new heights. Especially if that ends in a Rookie of the Year award. Meanwhile, lackluster production could mean a pull back in value. Overall we’re bullish in both the short term and over the next few years.