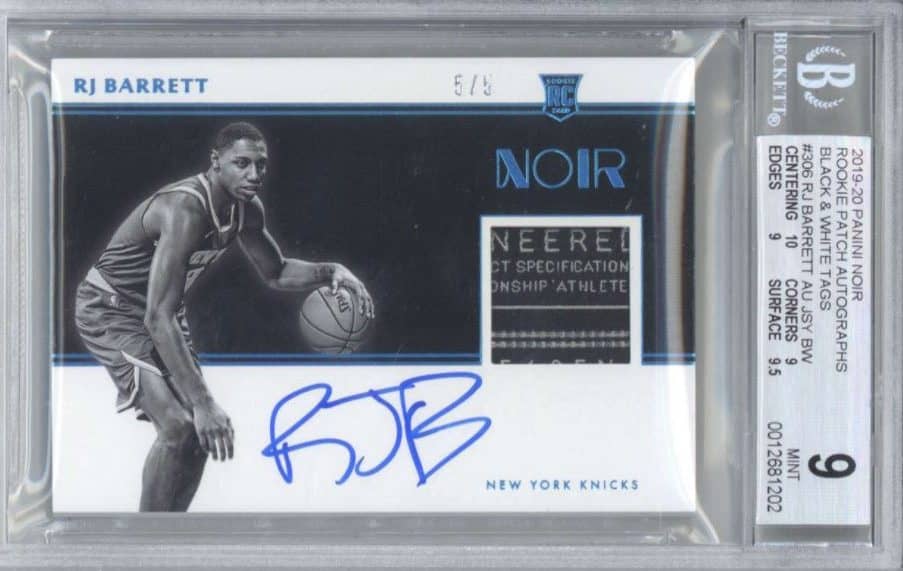 The RJ Barrett rookie card market could be on the verge of a price breakout. To understand why we’d make this assertion, all you have to do is take a look at the player. Of course! While Barrett turned in a decent rookie season, it was far from electrifying (only 1 third-place vote for ROY). However, Barrett is making some major strides so far in his second season and that’s the reason for our bullish sentiment.

Across the board, Barrett is getting better and his fundamental stat line shows it. In 2021 he’s more than 3 points per game better in scoring, over 3 better in rebounds per game, and has generated almost a full assist improvement over last season. However, even with the scoring increase, the biggest area of opportunity may be the shooting. According to scout Ian Begley, Barrett’s shot can be hit or miss. We’re hopeful that will improve over the course of his second season. If it does, Barrett will go from being on the cusp of a breakout to in full breakout mode. And thus, so will his rookie cards. Here are some great options if you’re looking to pick one off before that happens! 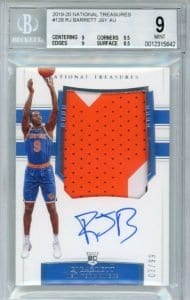 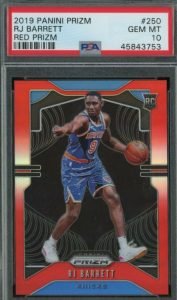 It’s hard to have a Top 5 NBA rookie card list without mentioning Panini Prizm. Year in and year out, the set offers some of the most collectible cards the industry has to offer. As a whole, you’re not gonna see as high of values as National Treasures. However, what you will find is all kinds of cards in that moderate range. For instance, the Red Prizm shown above PSA 10 went for just a hair under $1,000 recently. Rather have a little more flash? Check out that Silver Prizm for about the same price point. 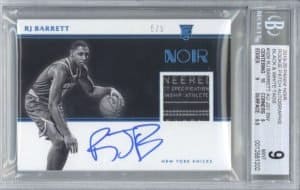 Panini Noir is a bit of an anomaly. On one hand, it offers sleek and simplistic cards like the /5 AUTO patch above (a good higher-end play). On the other, you’ll see cards that spotlight a massive up close and personal photo of RJ’s sneaker. To each their own! Either way, the set is the perfect option if you’re only looking to invest a few hundred bucks on a card. All kinds of options in that area. 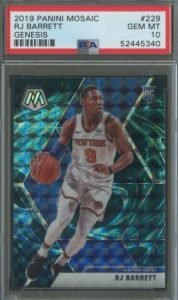 This RJ Barrett rookie card from Mosaic is the #229 Genesis Prizm. It’s one of the more valuable RJ cards in the set going for around $1,500 as a PSA 10 grade. Mosaic first debuted as an online-only addition to Panini’s arsenal. However, now it’s become a basketball card industry mainstay that doesn’t appear to be going anywhere. Not only has it entrenched itself smack dab in the middle of the conversation for best new editions, but Mosaic has also risen to become one of the most sought after sets PERIOD. Plenty of options in the moderate investment range. 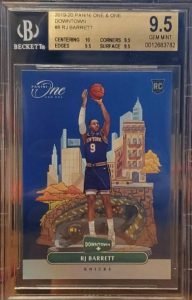 Just take one look at that “Downtown” insert and say with a straight face that you don’t want it in your collection. A tall order by anyone’s standards. In addition to the inserts, there’s plenty of patchwork going on in this set. So if material is your thing, think Panini One. We love the /49 patch with the on-card auto for under $500. That “Downtown” insert will cost you quite a bit more, however.

Unlike Barrett, this guy had no problem receiving Rookie of the Year votes. Check out our Ja Morant Rookie Card Hot List!

We can’t help but believe there are profits to be made with a quick flip here. The season is still young and as we talked about earlier, Barrett is already showing he’s not about to turn in a second-year disappointment. Look for Barrett to build more confidence as the season progresses. Something that will favorably impact his stat line AND your short term investment. 8/10

With another great rookie addition in Obi Toppin, the Knicks seem to be on the way up. Sure they may not make the playoffs this year, but an appearance over the next 5 seasons seems likely. If that happens you can be sure RJ Barrett will be right in the thick of things. Playoffs in the spotlight known as the Big Apple on top of steady performance sounds like a winner to us. 8.5/10

A long term play is something we’ll typically think about for the sports world elites. That and players who seem to be on their way to becoming one. RJ Barrett may never be grouped into this category. And that’s just fine, a short to mid-term approach is all you need here. 5/10

Check Out Our Favorite MLB Prospect Investments of 2021!