Find Your Ronald Acuna Bat Down Bargain on eBay

After a sophomore season in which Ronald Acuna Jr. almost joined the prestigious 40/40 club, it came as no surprise to see many fantasy experts ranking him number 1 on their big boards. And while the average slipped in 2020, we can chalk that up to the low sample size. The important thing is the power and OPS were as healthy as ever.  Some would say that these so-called gurus would do well to wipe the foam from their mouths and remember Mike Trout still exists before calling Acuna the game’s best.

BUT maybe, just maybe, they’re onto something and Acuna really is ready to surpass Trout as the game’s best player. If that happens? The now-famous Ronald Acuna Bat Down card will be here to stay! And if so, an investment in one of the following cards could pay MONSTER returns in both the short and long term.

So, without wasting too much more time, let’s go over the variations. We’re gonna go ahead and start with the most affordable and end with the most appalling.

Questions of the Day: Who will turn in the better 2021, Ronald Acuna Jr. or Juan Soto? 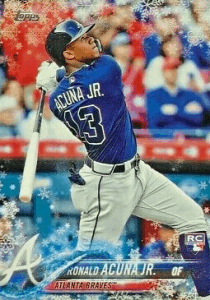 A festive card that’s BY FAR the most affordable on the list. Even after the price explosion, these can still be gobbled up for tens of dollars, not THOUSANDS. So if you only have a few hundred to invest, the Ronald Acuna Bat Down Holiday variation is the best option. Plus they’ll look great on the mantle at Christmas time! 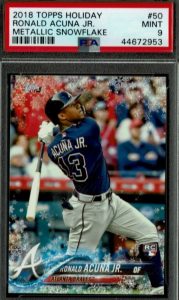 Okay, now we move from the tens of dollars to the hundreds. In PSA 10 condition the “Metallic” Holiday Ronald Acuna Bat down will cost you between $100 and $200 at the moment. If you’re looking for more than “just a taste” but not ready to commit big money, this could be a great purchase. 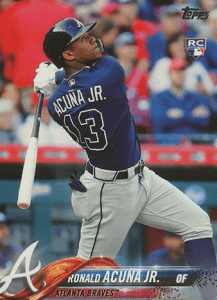 Of the 3 variations, this is the “normal” one. What’s not normal is the epic price boom it has experienced over the past couple of years. It basically went from some low hanging fruit we could all enjoy, to a fine delicacy only suitable for the most serious of collectors. Want a PSA 10 grade? Be prepared to come up with more than $2,000.

So will it continue its meteoric rise or come crashing back to earth?? Be patient and we’ll offer out two cents! 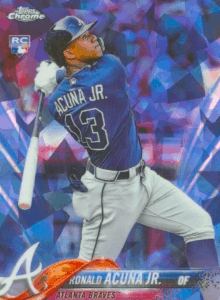 Oh boy. Now here’s a card that’s become really full of itself. And why wouldn’t it be? Prices for a grade 10 gem mint have surged to right around the FIVE THOUSAND DOLLAR mark. It’s also EXTREMELY rare. So if you are fortunate enough to be in the market for one of these bad boys, don’t expect to find many to choose from. 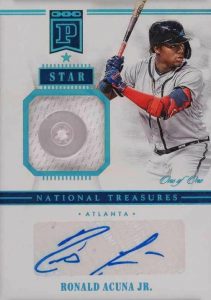 As with the player the Ronald Acuna card values greatly vary depending on the particular card. The most valuable of course will be his rookie or prospect additions. However, even some of Acuna’s non-rookie cards like the 2019 National Treasures Blockchain featured above can bring in well over $500. And that’s from a set that’s not known for its baseball cards!

Looking to invest in a more affordable young player??  Here are some red hot Alex Kirilloff rookie cards to consider!

Prior to the 2020 season, we thought this card may be a “bubble”. Here’s what we had to say then:

“Look, by now you’ve missed out on quite a bit of appreciation (if you don’t already own one that is). However, that doesn’t mean it doesn’t have much more room to grow. It all comes down to whether or not Acuna will continue on his current trajectory. If the kid surpasses Trout as the best in the bigs, then expect him to stay there for a LONG TIME. BUT, at only 22 there could be some growing pains along the way (hence the caution part). So do we think he’ll get there? Yep, but probably not this year. And when he eventually reaches the apex, just take a look at these Mike Trout cards to see what could be in store for the Ronald Acuna Bat Down variations!”

As you can see we were bullish on the Acuna bat down then even with our fears of it being a bubble that could pop at any moment. However, another year has gone by and the prices have only GONE UP since then. We believe this should quell any fears that this card was just a fad. That said, let’s dig into our updated investment strategies!

The 2021 MLB season is quickly approaching and we firmly expect Ronald Acuna Jr. Bat Down prices to begin heating up. If you’re looking for a quick way to make some easy profits consider buying now and selling at the start of the season. However, if you’re looking for more significant gains, hold through the season and hopes Acuna turns in a monster. At this point, it just seems like a matter of HOW MUCH you wanna make! 9.5/10

Acuna has given us ZERO reasons to doubt his capability. And at such a young age we expect him only to get better as he begins to enter his prime. He’s on a solid team and there could easily be a World Series or MVP in Acuna’s medium-term future. If either of those things happens you’ll be glad you didn’t sell short. And if both happen?? We’ll let you figure that out! 10/10

The last two Ronald Acuna Bat Down cards we mentioned are some of Acuna’s most valuable cards. Like we said earlier, many expect Acuna to become the next Trout. That’s certainly all order. But if he does? Just look at how much the most expensive Mike Trout rookie cards are worth. If Acuna lives up to those lofty expectations some of these cards could pay off your mortgage years down the road. Enough said? 10/10