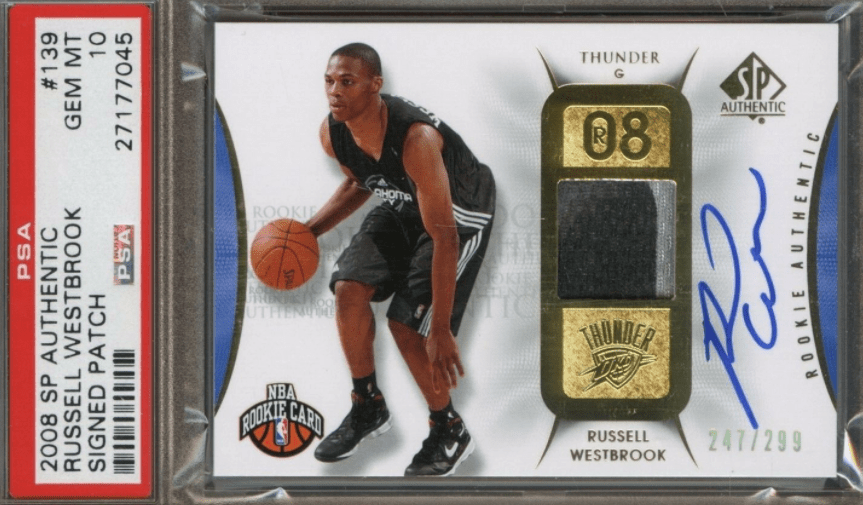 Have you picked up a Russell Westbrook rookie card yet? Well, you’ve sure had plenty of time to think about it because it seems like he’s been an NBA staple forever. And while we may overstate the length of his presence, he has been around longer than you may think. In fact, the superstar point guard was drafted way back in 2008 by the then Seattle SuperSonics, who would immediately move to Oklahoma just a few days later.

And what a pick that turned out to be. Westbrook helped the Thunder to the playoffs on 9 occasions and is now a 9-time NBA All-Star. Additionally, he was selected as the league MVP in 2017. Then in 2019, Westbrook was traded to Houston where he went on to have another season of Westbrook greatness. And by that, we mean 27.2 points a game, an All-Star appearance, and another trip back to the playoffs.

As you can see, Westbrook has cemented himself as a league icon and shows no signs of slowing down. Great reasons to pick up one of the following Russel Westbrook rookie cards!

Questions of the day: Which of these emerging stars will go on to have a bigger impact than Westbrook? Let us know in the comments below! 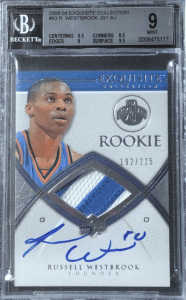 A truly captivating card that features a headshot of Westbrook in the top right, the patch center stage, and the on-card autograph down the bottom. Add to that an amazing color scheme and the word ‘rookie’ prominent in the top right side and you can see why it’s a favorite among collectors.

There was a print run of just 225, which is shown on the front of the card. Something that contributes to the card’s high value. Expect to pay at least $2,000 for a gem mint. 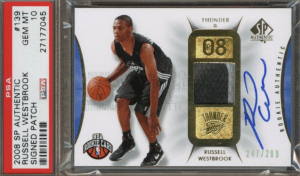 Another great design, this time horizontally printed with Russel Westbrook on the left side of the card. The patch is nicely framed on the right within a golden frame that also features the number 8 at the top. One slight downfall is that the on-card autograph seems to clash with the rest of the card.

Numbered 299, the card holds considerable value.  However, there are quite a few out there if want to get your hands on one. They have sold for up to $1,000 in gem mint 10 condition but should be available for a little less if you look hard enough. There is also a version without a patch with a longer print run if you’re looking to spend a little less. 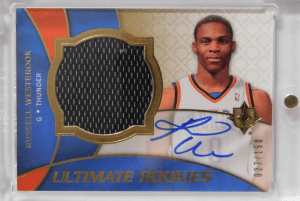 The brand name kind of carries this card because the design is nothing to write home about. To say the least. The autograph lazily floats in a place on the card that makes it seem like an afterthought. On top of that, the rest of the card is downright boring. Westbrook is standing off to the side with a ho-hum look on his face while the patch seems to clash with the rest of the “all over the place” design. In case you missed it, we’re NOT a fan of this card’s aesthetics.

However, despite its borderline hideous appearance, we’re still recommending this card because it has decent value and seems to be pretty popular. Meaning when you go to sell, you should have no problem lining up a potential buyer. Always something to keep in mind when making a purchase. 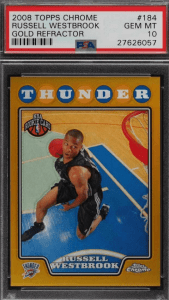 A staple of any collection, the Topps Chrome set really pulled it out the bag again for this card. It features a retro style with a background and borders that vary in color depending on the refractor parallel. While we love that part of it, the card’s post prom0inbmant feature has to be the photo of Westbrook in mid-air about to complete a between the legs dunk. Talk about explosive!

And what’s even more explosive than the card’s looks is its value. The most valuable is the Gold Refractor which can rake in over $6,000 if a grade 10. Meanwhile, if you’re looking for a more moderate investment check out Xfractor, Orange Refractor, or even the base card. All great pieces to any collection. 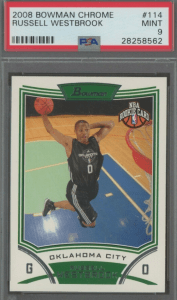 Topps Chrome wayward cousin Bowman Chrome offers a similar Russell Westbrook rookie card to the one we just reviewed. Just like the Topps Chrome, Bowman offers a slightly retro look along with a high-flying slam-dunk photo.

While the appearance is similar, the card’s valuation is far less than the Topps Chrome. Which is a good thing if you’re looking for a solid investment piece for less than $500!

Related: Just like Westbrook, The Worm is an incredibly polarizing player. Check out our Dennis Rodman rookie card review!

Russel Westbrook is still playing at a very high level and is on a team that’s capable of a playoff run in 2021. A big season and a better than expected year-end result for whatever team he’s playing for should propel you to a nice little profit. However, the BIG score will come when Westbrook inevitably breaks Oscar Robertson’s long-standing triple-double record. As of right now, he’s only 35 behind which is a very doable number for Westbrook. 9.5/10

Whether he breaks the triple-double record next year or the year after, Westbrook seems to have a few good years left in him. Therefore, you won’t need that record-breaking event in order to make a medium-term investment profitable. And who knows, maybe that all elusive NBA Championship lies ahead. 8/10

Whether he wins that first NBA title or not, the guys a sure thing when it comes to a Hall of Fame induction. And when you have a Hall of Famer on the front of your card, you should always feel comfortable holding for the long haul. 9.5/10