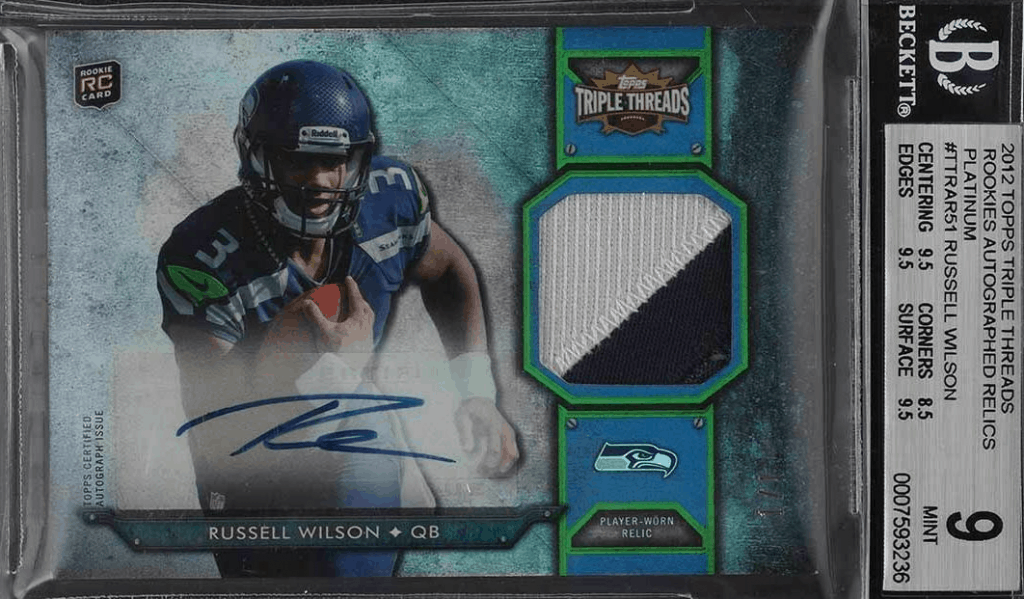 Wilson was drafted in the 3rd round as the 75th overall pick by the Seattle Seahawks in 2012 and immediately exceeded all expectations. He immediately became the Seahawks starting quarterback and has not looked back since, starting every single game since 2012.

During that impressive stretch, Wilson has piled up an extensive list of achievements, including winning Super Bowl XLVIII and being selected for the Pro Bowl a whopping 7 times.

And since this space is dedicated to cards that commentate his rookie season, let’s take a look at what he did during his first year. It was certainly one of the ages as Wilson tied Peyton Manning’s record for most rookie touchdown passes in a season with 26. Additionally, he threw for over 3,000 yards and achieved a passer rating of 100. By the way, he also rushed for nearly 500 yards and found the endzone with his legs on 4 occasions. Unsurprisingly, Wilson was named the Pepsi Rookie of the Year, and the following cards certainly reflect that.

Question of the day – Who has a better shot at taking this year’s MVP away from Patrick Mahomes: Russell Wilson or Aaron Rodgers? 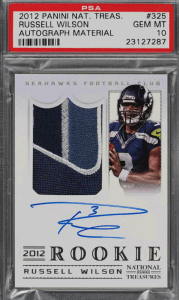 Always a great rookie set, this year’s National Treasures is no different. This particular card features Russel Wilson off to the right with a jumbo patch to the left. Add to that an equally big on-card signature and you have yourself an item worth writing home about.

With a print run of 99, an excellent design, and a great brand name, this card will not come cheap. If graded gem mint 10 conditions, expect to pay north of $20,000 if you want to add it to your collection. Looking to spend a little less than that? Consider picking up an ungraded version for around $4,000.

This card is an incredibly hot item, and it’s easy to see why. The sleek design shows Wilson on the right with the ‘rookie ticket’ on the left and the on-card autograph overlapping both at the bottom.

There are styles of the card, one with a white background the other with blue. Either way you slice it, a great card that holds considerable value. 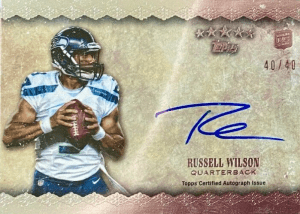 Another outstanding card, this one with a much appreciated horizontal layout that features Wilson on the right along with his autograph and a big ole’ smack dab in the middle fo the left side of the booklet.

Prices vary but overall this seems to be a great intermediate-range investment with many of the lower print runs valued at less than $1,000. 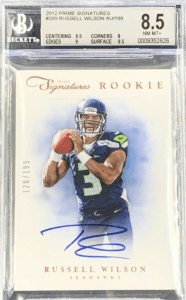 Sometimes card manufacturers try to do something unique and it backfires. That is certainly NOT the case here. The card boasts a simple and elegant design that features Russel faded onto a white background with a spectacular blue background and on-card signature at the bottom. 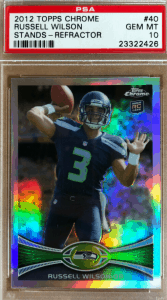 No rookie set is complete without a Topps Chrome card thrown into the mix. This Russell Wilson rookie card features the ball slinger as the main attraction and has a stick-on autograph down at the bottom. The border color varies depending on which parallel it is.

In the right condition, some of the more valuable parallels are capable of values exceeding $20,000. However, there are plenty of lower-cost options out there making it a great card for all types of collectors, regardless of the bankroll factor. 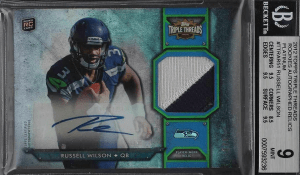 Topps Platinum offers a couple of must-have variations of Russell Wilson first-year cards. The most common is the vertical format version which shows Russell standing calm in the pocket ready to unload. Meanwhile, the horizontal layout shows a similar image but comes with a nice patch as an added bonus. Both pack a wallop when it comes to value.

However, neither can match the THIRD option from this set. The ever-elusive 1/1 TRIPLE THREADS shown above. Unlike the first two options, this rare find shows Russell flexing his scrambling ability and is valued somewhere between $3,000 and $4,000. Overall Topps Platinum doesn’t offer the value as it the Chrome set but it certainly carves out a unique niche that shouldn’t be ignored.

Related: The only thing standing in the way of Russell’s first MVP is that guy in Kansas City. Safe to say these Patrick Mahomes rookie cards are incredibly popular right now!

The only thing missing from Wilson’s extensive list of accomplishments is an MVP. At the beginning of the season, many were already penciling him in as the winner of the illustrious award. However, Russell has since cooled off. Especially in that awful home loss to the Giants. UGH. Even with the setbacks, he’s still very alive in the race and a late-season push could earn him the trophy. But even if he misses out again, Russell is having an amazing year that could easily be capped with a deep playoff run. 10/10

With how he’s playing this year (which could arguably be his best so far), it’s easy to see that Wilson is nowhere near finished. Expect plenty of MVP and Super Bowl runs in the future. Green light all the way. 10/10

While the jury is “still out” on whether or not Wilson is a Hall of Famer, let’s not kid ourselves. Russell Wilson WILL be in Canton. If you’re going long, rest easy knowing you’re investing in one of the true talents to ever play the QB position in the NFL. 10/10

See how Russell Wilson fared in our pre-season 2020 NFL MVP Predictions Round Robin!