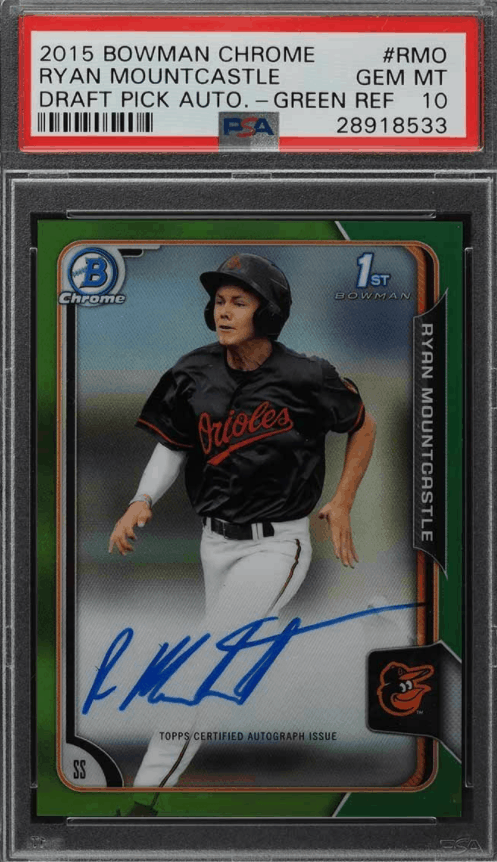 In the market for a Ryan Mountcastle rookie card? If not, perhaps you should be. In case you missed it, the Orioles called up one of their top hitting prospects last year and for someone who just barely cracked the top 100 prospect list, he sure looked comfortable in the big leagues.

In 126 at-bats, Mountcastle was able to connect for 5 home runs to go along with an amazing .333 batting average. On top of that, he slugged .492 and had an OPS of almost .900. Let’s just say he adjusted to MLB pitching quite well. And if the trend continues in 2021, there’s gonna be a lot more people talking about the still relatively obscure Mountcastle. But before you go rushing to buy his card, let’s try to find out why he was ranked so low on the top 100 prospect list going into the 2020 season (99 of 100).

Speaking of unheralded prospects going into 2020….

Take one look at Ryan’s minor league numbers and you’ll see his ability to handle the bat had nothing to do with that lowly 99/100 ranking. For instance, in his very first season of professional ball, Mountcastle held his own by hitting .298 with 4 home runs in 196 at-bats. And that was straight of out highschool. Over the course of the next 3 seasons on the farm, Mountcastle went on to hit 41 more home runs and never hit lower than .281. But it wasn’t until 2019 when Ryan finally had a season that would propel him to the top 100 level. That year he hit .312 with 25 home runs to go along with a .527 slug. Impressive to say the least.

So if the bat wasn’t the reason for the low ranking, what was? You guessed it. The GLOVE. Mountcastle was drafted as a shortstop but that didn’t take and he soon found himself playing exclusively at third base over the 2018 season. Apparently, that didn’t work either because Ryan was next shipped over to first base in 2019. And guess where he is in the big leagues? Leftfield. According to MLB.com, Mountcastle has a below-average arm and limited range so it appears he may be bounced around a bit before he settles in somewhere.

While a below-average defensive player may give coaches headaches, we collectors care about THE BAT (for the most part). So don’t let that 99/100 scare you, Mountcastle knows how to hit and that’s what matters most. Now let’s get to those cards! 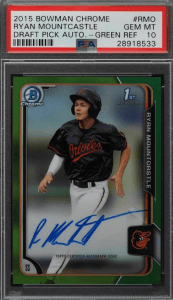 If you’re serious about a Ryan Mountcastle rookie card investment, this one is definitely the card to target. For instance, the rare autographed Orange, Black, or Gold refractors will all command more than a $500 price tag.  Looking to take it down a notch? We highly recommend grabbing a Green Refractor. They have a print run of 99, making them more common AND more affordable at around $150-$200 for a PSA 9.

As far as looks go, the card itself isn’t all that much to get excited over. Just a casual photo of what appears to be a relaxed homerun trot. Something we hope to see much more of in the future!. 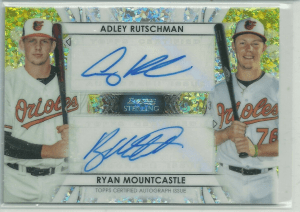 When you combine Mountcastle with perhaps the best catching prospect since Joe Mauer, the end product is one sweet card. This spectacular edition from Bowman Sterling shows Mountcastle on the right and Ruschmann on the left, both with the bat sluing across the shoulders. Our crystal ball sees many future scenes of these two slapping high fives after one of them clears the bases.

The card shown above is the Gold Dual Auto. Highly recommended. 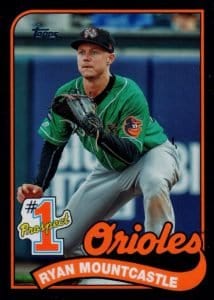 We love the throwback design complete with the #1 Prospect Trophy in the lower left-hand corner. If you’re just having fun with it pick up the Black parallel featured above for less than $10. Little more serious than that? Go for one of the autographed versions. They have a print run of 25 and are valued at just under $200 (non-graded). 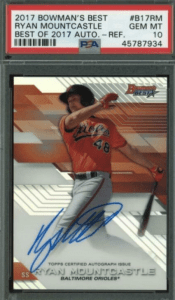 Hey, it may not be a Bowman Chrome, but it’s still a Bowman. And a nice looking Bowman at that. When it comes to eye-appeal, this one puts the Chrome card to shame. Instead of a lazy homerun trot, you get a DEEP cut that shows off Mountcastle’s silky smooth swing. 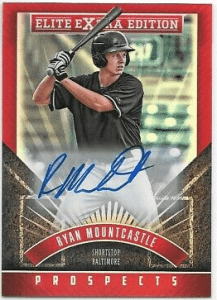 The card shows Mountcastle standing calm in the batter’s bat waiting for the opposing pitcher to make a mistake (we assume he’s not looking to get struck out). Either way, there are a few different options to choose from with this set and prices depend on the color/rarity. Regardless of which you decide on you won’t be spending an arm and a leg here, that’s for sure. 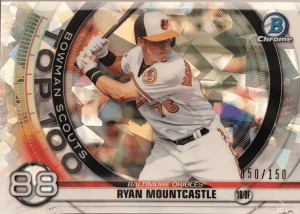 Got your eye on a “true Ryan Mountcastle rookie card? Say no more. The 2020 Bowman Chrome Scouts has ya covered. A horizontal card that features Mountcastle at the plate and about to let it rip. Go for the uber-rare “Superfractor” if you want to go big.

Did you know?: There’s a thing called YuGiOh and its card are highly collectible. Check out the most valuable YuGiOh cards of all time!

Ryan Mountcastle did nothing but hit all throughout his minor league career. And by what we’ve seen so far, it doesn’t seem like he’s planning on breaking that tradition in the big leagues. If he continues to square up the ball, the value of his rookie cards is only going to continue to grow. So why not take a chance on a prospect that actually has some MLB experience under his belt? 8/10

There’s plenty of prospects who have proven far less that command a much higher price. If Mountcastle turns in a full season that’s anywhere near what he did in 2020, your chance to buy low on a Ryan Mountcastle rookie card will be over. If he’s the hitter we think he is there should be plenty of room for profits over the next few summers.