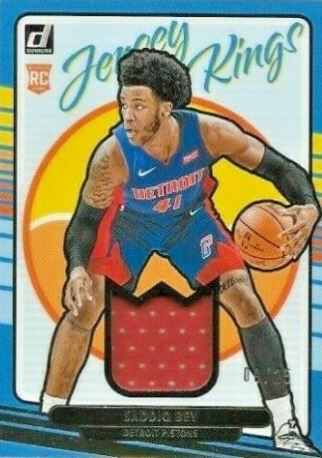 With his play propelling him up the NBA ROY contender shortlist, it’s only reasonable that we take a look at the Saddiq Bey rookie card market. While still only averaging 24 minutes per game, Bey has stepped up his production and is now good for over 10 points and 10 rebounds each time out. On top of that, it seems he’s been drawing attention from the competition with a rumor of a Marvin Bagley for Saqddig Bey offer being shot down by the Pistons. So if you happen to think Bey’s performance is a sign of even better things to come, you’re sure to be interested in the following first-year cards! 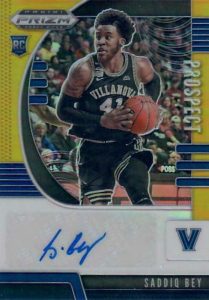 The premeire set for pre-draft NBA talent leads the way so far with plenty of Saddiq Bey rookie card options. There are plenty avialable for $200 or less if you’re taking a casual approach ot the matter. Meanwhile, higher end investors should have no problem finding something to spend more than $500 on. Like that autographed Gold Prizm shown above! 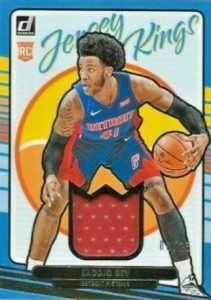 Whether you’re looking for a typical autogrpahed base card, something with some flash and numbers on it, or an insert like the Jersey Kings card shown above – Donruss has you covered. It’s one of the first regular season NBA sets to be released and has plenty great options for well under $100. Even some of the most expensive cards to sufrace so far are only a few hundred bucks at the moment. 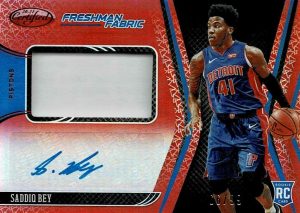 Another post-NBA draft set where you can find Bey in his Pistons uniform. If you’re looking for a rare card with an autograph inlcuded, look no further. There are plenty of options like the card shown above that recently sold for $66 on eBay. Value galore! 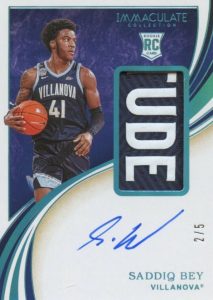 A set that’s not known for having a whole lot of options to choose from as it takes the quality over quanity approach. For instance, many of the highest valued Saddiq Bey rookie cards sold so far have been from this collection of cards. However, many of the biggest sets of the year have yet to be released so expect plenty of competion.

If you’re looking for a short term play we’d suggest waiting until the season is wrapped up and look for prices to flatten at some point during the offseason. Chances are you’ll be able to turn a decent profit if Bey comes out solid in 2022. 7/10

While we like the way Bey’s play is trending as of late, but he’s still got a long way to go before we’d consider wrapping up any substatial money than for more than a year. Go short and if you REALLY like where Bey is at at this time next year consider holding out for bigger profits.

3 Investments We Like More Than a Saddiq Bey Rookie Card