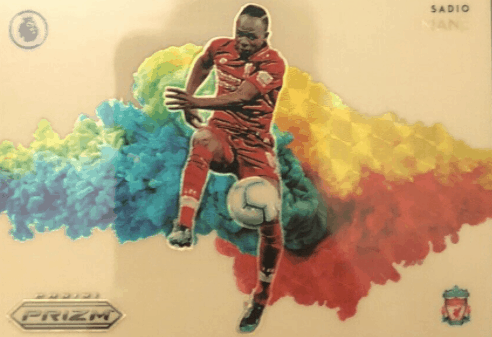 On the hunt for some Sadio Mane trading cards? While the options aren’t plentiful, they’re out there. The question is, which ones are worthwhile? Fortunately, we’re about to get into that. But first, let’s spend a minute to see why you would even be interested in buying a Sadio Mane card in the first place.

Sadio Mane broke into senior football at French second division side Metz after progressing through youth football in his native home of Senegal. He impressed in his first season there and earned himself a move to Austrian Bundesliga side Red Bull Salzburg. There he scored an impressive 42 goals in his 2 full seasons. So impressive in fact, that he caught the eye of Southampton where he got hick first crack at Premier League competition. Mane again impressed scoring 21 league goals in just 2 years.

All of that scoring earned Sadio Mane a £34 million move to Liverpool where his success story really begins. So far in just 4 full seasons for The Reds, Mane has scored 81 goals and played a vital role in winning both the Premier League and the Champions League.

Here’s a list of some of the most valuable Neymar Jr. cards.

Now, back to what we’re here for. THE CARDS. There is a limited number of Sadio Mane trading cards available and the market hasn’t really taken off yet. So while values are relatively low, now may be a good time to pick up a Sadio Maine card. Having said that, there are a few possible low-risk investment gems that we have our eyes on. 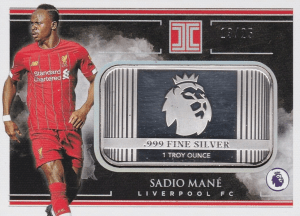 How about a card with an ounce of silver stuck to the front of it? What WILL they think of next?? Seems like the silver along has got to be worth at least $20 so there’s a starting point for value! Besides that, it really is a great looking card. Mane starting downfield with a look on his face that seems to say “I was wide open!”. 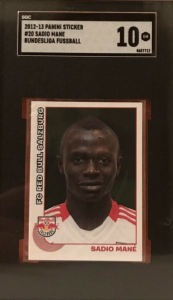 This card is from Mane’s first season in top-flight European football and is as close to a true rookie card as you can find for him. It features a headshot of Mane in his Red Bull Salzburg shirt, although you can only see the shoulders, which is a bit of a letdown. His name is written up the left side with his Salzburg placed badge below.

A mint 10 condition copy of this card has a value that hovers around the $300. 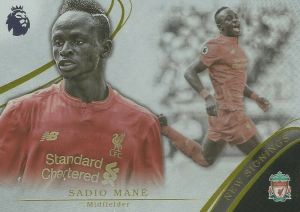 A nice card that features two pictures of Mane across the front. One has him in his full Southampton kit in mid-game action, while the other is a slightly faded headshot hovering delicately in the foreground. Mane’s name is written at the bottom along with his position.

Considering this card is a relatively recent retail release, finding it on the market can actually be quite rare. Due to this scarcity, there are quite often ‘hopeful’ eBay listings values of around $250. But in the real world, the actual value currently is probably closer to $100. 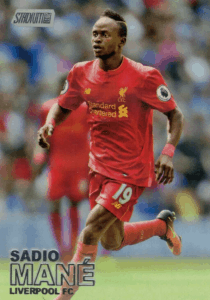 Here we see Mane playing in a Premier League game in front of a packed stadium. His name is written in a typical Topps font at the bottom right.

There is nothing really spectacular about this card, except that it was made by Topps in Mane’s first season with Liverpool. It has a relatively low value of around $15 to $30, but this has the potential to increase by quite a bit if he pushes on to become a Liverpool legend. 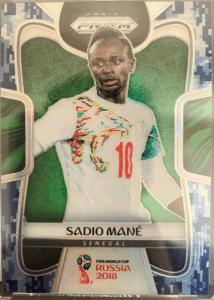 This is, without a doubt, just like with Tuatua Tagovailoa rookie cards, Panini Prizm is the go-to set for Sadio Mane trading cards. These feature Mane in his Senegal World Cup kit on a dark green background with a reflective border.

The card was produced for the 2018 Russian World Cup which was just the second World Cup Senegal have ever qualified for. Additionally, this was the first time Sadio Mane’s took part in the competition. This parallel had a limited print run of just 15 and as such has a comparatively big value of around $500 when in mint condition.

There are a few parallels of this card and the base version is also highly sought after, but nowhere near as rare. An extra $20 will get the job done for a base. 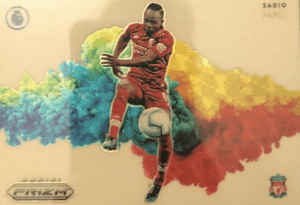 While the previous may be more popular, this one is just as valuable. And WAAAYY more appealing to the eye. The card features Sadio attempting the settle the ball in front of a blast of colorful smoke. Quite the chaotic scene. Love it.

Looking to go a little bigger on your investment? Check out these high-end Lionel Messi rookie card options!

Mane’s last 4 seasons have been by far his most productive in terms of goals scored and major honors won. With his Liverpool side currently one of the best teams in the world, there is no indication this will change anytime soon.

Aside from what he’s already accomplished, Mane’s reputation should continue to grow. And with it, so should his trading card value. However, for there to be a real jump in value, Mane will have to do something extraordinary. This could be a good World Cup run with Senegal, winning more individual honors, or another big-money move. All of which are things Mane is absolutely capable of in the next few years.