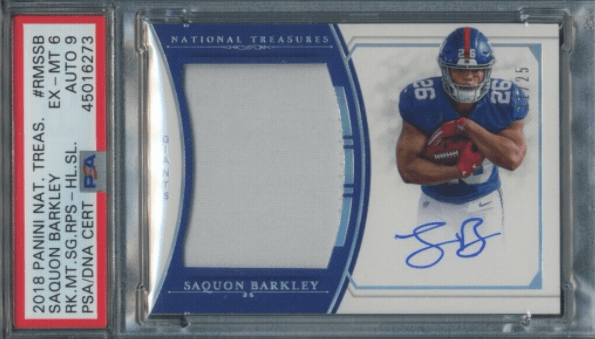 The interest in the Saquon Barkley rookie card market has taken a nosedive since his week 2 ACL injury.  That means you may have a hard time selling for a decent price if you were stuck holding the bag when the untimely event took place. So if you still own one you’ll need to make a tough decision on whether you want to unload at a lower price or hold out for a bounce-back 2021 season. A hard call that comes down to how long you can tolerate having dead money wrapped up in an idle investment.

While Saquon Barkley rookie card owners have a difficult decision to make, those who don’t have a piece of the action should consider treating the ACL injury as a buying opportunity. Here are some cards we have our eyes on.

MUST-READ: Our hot off the press list of the funniest baseball cards of all time! 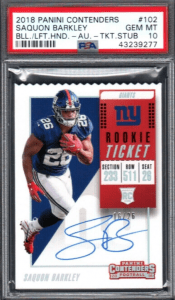 Both the 102 and 102B are great cards that seem to be going for well below the prices they sold at prior to the injury. The B side features Barkley at the left of the card running with the ball tucked away under his arm. Meanwhile, the regular 102 shows Barkley pulling off one of his signature jukes moves (much to the dismay of the would-be tackler). Both options have Barkley’s autograph in blue ink at the bottom right-hand corner. However, the red ‘rookie ticket’ is what makes these cards really stand out.

As far as value goes, there are plenty of different parallels of both so a lot depends on how rare the card is. One thing we know for sure, they’re much cheaper than they were at the start of the season! 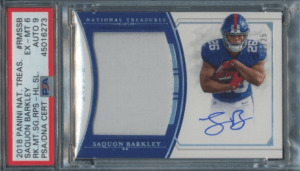 Many of the most valuable Saquon Barkley rookie cards come from National Treasures. So, if you’re looking to spend big, you know where to look. The only problem is that there haven’t been many of these sold since Barkley’s season-ending injury. This makes sense as the more valuable the card, the more you stand to lose when you sell-off due to an injury.  So while you may not see many of these for sale at a price that reflects the injury, take advantage if you find a seller who’s actually willing to admit Barkley is injured. 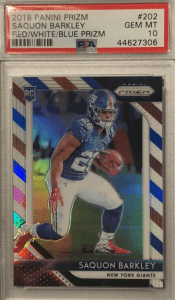 This is one of the most popular rookie cards of Saquon Barkley. The cards show him visibly kicking up some turf while making a cutback. The dark border comes in a variety of styles and colors depending on which parallel. There were tons of these sold before week 2, but due to the injury, the market has come to a grinding halt. If you find a seller who’s willing to take a loss, buy with confidence. 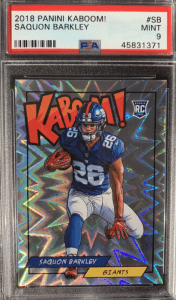 It’s hard for us to review an NFL player’s card options without mentioning Panini KABOOM cards. It’s simply one of our favorite styles. Perhaps only second to the Donruss Downtowns. Barkley is depicted by a superhero comic style drawing of him running with the ball. As usual, all the text is also in that same comic book style with everything set on top of a silver ‘explosive’ background. With style like that, it comes as no surprise that these cards are gathering popularity amongst collectors.

The base version of this Panini card has a silver background and a print run of just 50. Meanwhile, there are also rarer parallels such as the Gold (#/10) and Green (1/1). These don’t seem to be losing too much value since the injury. But then again, not many have sold. If you see a bargain, strike quickly!

Looking for a running back who’s NOT on the IL? Check out these Josh Jacobs rookie card options!

By this time next year, Barkley should back to full health. If all goes well you’ll likely have an opportunity to sell for a decent short-term profit if you found a card to swoop up during the ACL recovery. However, a lot will depend on how he performs once he’s back. 8/10

If you go this route you’re banking on Barkley having an Adrien Peterson like recovery. Which very well could be the case. And even if he is a little rusty that first year back, over the following seasons he should refind his footing. On top of that, this time frame should also include his natural prime. A bounce-back that leads to an even better Barkley should do wonders for your investment. 9/10

He’s not at the point of his career where you should consider going long. Unless he’s your favorite player and you’re not too concerned about the money aspect of it. Wait until he comes back and proves himself over the course of a few seasons before you start thinking down the road. 3/10

He was one of the top breakout players of 2020. Is it a good time to jump into the Josh Allen rookie card market?