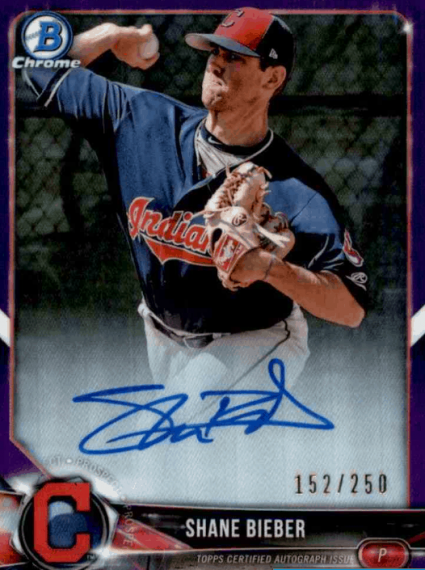 In 2019, Shane Bieber showed he had what it takes to be a bonafide ACE. In just his second season, the young righty amassed over 200 innings (214 to be precise) and racked up 259 strikeouts.  In addition to those 10.9 K’s per 9 innings, the sophomore also flashed another important trait of a true ace:  the ability to go deep into games. Believe it or not, Shane led the league with 3 complete games and went 7 plus innings a number of times.

Then game 2020. In a shortened season that was full of surprises, one thing didn’t catch us off guard. The continuation of Bieber’s meteoric through the ranks of MLB pitching elites. And guess where that rise ended? The TOP spot in the pecking order. While Shane didn’t get his complete games, he outperformed just about every other important statistical landmark on his way to the 2020 AL Cy Young award.

And 2021? Bieber was off to a torrid pace before being slowed down by a shoulder injury that eventually led to the end of his season.

There’s no longer a discussion of whether or not Bieber is an elite pitcher. The only question we’re asking now is will he be the same after the injury. While shoulder injuries are tricky, there have been many pitchers who have come back from them to be just as good or if not better. Therefore, if you don’t mind a little risk, buying low Shane Bieber rookie card prior to the season may be a very profitable endeavor.

Here are a few to consider going into the 2022. If it ever begins. 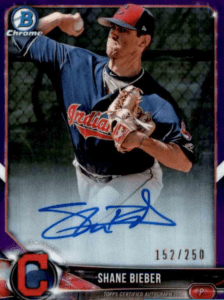 A swell card that shows Bieber in mid-delivery. It comes in a variety of refractor styles and is available with an autograph. As always, we recommend getting at least one of these features for bigger profits. Don’t be afraid of the Cy Young award inflating the market either. Even some of the rarer refractor can still be snagged for a relatively low price (especially when compared to some Shohei Ohtani rookie cards). For instance, Gold Auto Refractor that recently sold for $1,800 still seems like a bargain. 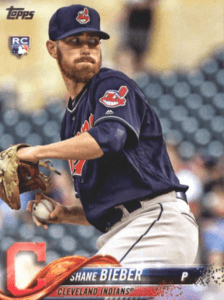 Shane looks ready to bring the heat is this heavy-hitter from Topps.  The card comes in a variety of different styles, but we prefer the Independence Day version (no offense to the Memorial Day one but the stars and stripes are a cut above the camo!). Got a mom or dad who’s into collecting? Yep, Topps has these special days covered as well. The 2018 Topps Update Mothers Day version comes in pink while the Fathers Day comes in a powder blue (kinda like that sweet leisure suit he used to wear back in the ’70s!).

As far as pricing goes, a much more moderate play than the Bowman Chrome set from the same year. Many options are available for less than $500. 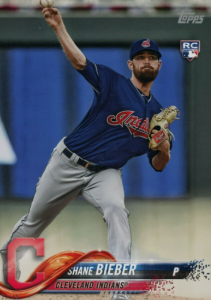 We always love a good image variation. Almost as much as we love hearing from our readers. So when one reached out to us and brought this rare gem to our attention making a new addition to our list was a no-brainer. This ultra rare SSP is from the same collection as the card above. However, as you can see Shane is towards the end of his wind up in the “ball over head” variation. As far as style goes, the card is pretty much the same as the base version. With the exception of the image of Bieber as he’s about to release that sick 2-seamer, that is.

When it comes to card value we’re running into a problem. With few on the market, it’s not everyday you see one of these sold. Therefore, getting a realistic idea on current pricing is difficult. However, the Gold parallel to the base card has sold for more than $200 recently. And with a print run of 250, there are quite a bit more of those than this SSP that has a print run of just 45. As such, we’d expect this one to bring in some decent dollars the next time it’s sold. 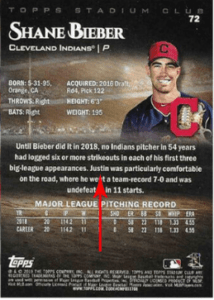 This card gained quite a bit of notoriety when Justin Bieber called it out on Twitter. Anyways, what’s up with the guy who’s responsible for this so-called “error”. Is he some sort of Justin Bieber fanboy? Or maybe Topps just couldn’t resist the obvious “error”. Either way, the mystery is probably one that will go unsolved (where’s Thomas Magnum when you need him?). Fan of Justin Bieber or not, any kind of novelty card has the potential to become a coveted collector’s item overnight. So stash a few of these away and hope the masses catch the “Bieber Fever”.

By the way, they’re still really cheap. Many available for under $100. 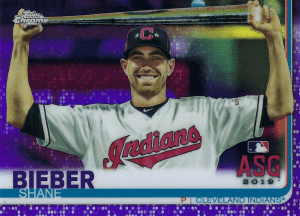 All kinds of great Shane Bieber rookie card options in this set. One’s that won’t break the bank either. If you’re only looking to throw a few bucks at it you could do a lot worse than a card from this set. 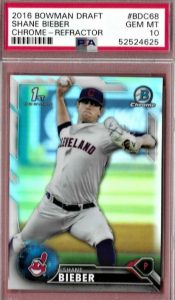 A rare instance in which a player’s 1st Bowman plays second fiddle to one that was produced in a later year. Talk about a head-scratcher! While the card may not be as valuable as the 2018 Chrom we’ve already listed, we like it just as much (or possibly even more) as a collector’s item. If you see one you like buy with confidence!

Baseball not your thing?  A Kobe Bryant rookie card might be a good idea!

Look, Bieber’s level of success doesn’t happen without a SERIOUS level of talent. Talent that was taken to the next level in 2020 and 2021 before the injury. It’ll be hard to get much better than than his Cy Young performance but anything close in 2022 should be a “win” for your short-term play. 9/10

Even with the injury, we fully expect the stats on the back of his baseball cards to keep amassing at a tremendous clip once he returns. As that happens, the value of the previously mentioned (and many other) Shane Bieber rookie cards should keep getting better (HIGHER) as well. Solid for years ahead. 9.5/10

He’s just had just over 3 seasons of MLB experience and he already has a coveted Cy Young under his belt. Huge check mark if you’re thinking about how many more are to come. Of course, arm trouble is always a concern with pitchers. But as long as he shows the ability to recover, we should see long term values pointing straight UP. 10/10

Cards to Watch going Into the 2021 Season: