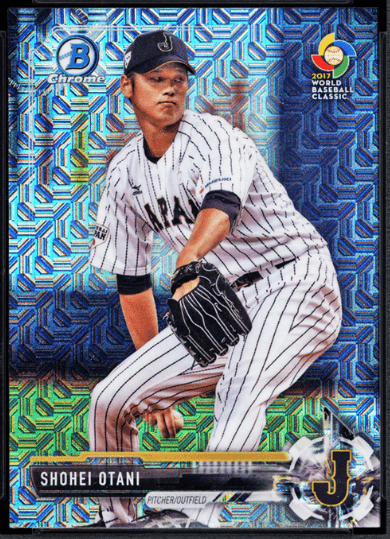 Shohei Ohtani will soon have the ball back in his right hand.  Which means, that oh so talented right arm is about to be put to good use.  And with a return to the mound, we’ll finally get to see our first glimpse of the 2-way star at full health.  Therefore, you can expect to see his rookie card value skyrocket back to full health AND THEN SOME.  So let’s cut to the chase and find some Shohei Ohtani rookie cards to add to the collection. 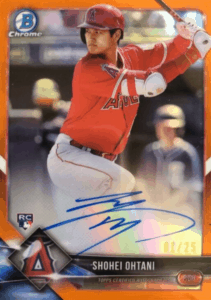 Ohtani may throw right, but as you can see from this beautiful (and very rare) Bowman Chrome rookie card, he bats left.  And what a beautiful left-handed swing it is.  Aesthetics aside, that swing has generated 40 home runs and more than 120 RBI over his first 2 seasons in the bigs (which only accounts for just over one full season of at-bats).  He’s also been remarkably consistent at getting on base with a career .286 batting average and .351 OBP (thank you baseball-reference).  So what we’re trying to say:  if you can afford it, BUY IT. 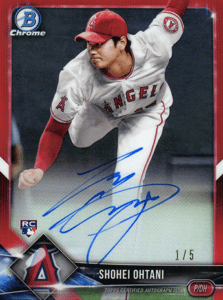 As we eluded to earlier, heeee’s baaaaaack.  According to Jeff Fletcher of The Orange County Register, Ohtani has been “ramping up intensity and volume.”  So one can only conclude that we’ll be seeing a healthy dose of Ohtani “the pitcher” this summer.  And as sweet as that swing is, his windup and delivery are even sweeter (like cotton-candy level sweet).  If Ohtani can deliver the wicked stuff he’s known for in his first season back at full health, the value of this card should only go UP.  Along with his chances for comeback player of the year! 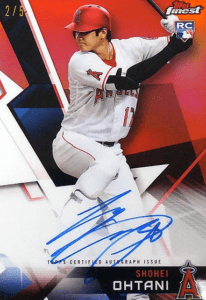 Simply put, this card is a gem.  With features like that famous leg kick and a red-splashed background, who can resist?  This one is nowhere near as valuable as the previous two and can still be had at a reasonable price (especially if you grab the non-autograph version).  So if you’re looking for a good medium-range Shohei Ohtani rookie card that’s ripe with potential, this one’s for you. 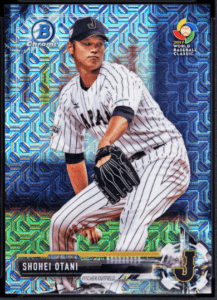 Ahhh, a classic “error” card.   As we all know, a simple misspelling of a name can generate some MEGA value.  So why not take a chance on an error card that showcases “Otani’s” abilities at the World Baseball Classic?  The card is still VERY affordable and could explode in value once Shohei gets his game back in full swing.

Like Ohtani’s fastball?  Here’s someone who can dial up the heat even higher!  Check out these Michael Kopech rookie cards.

The novelty that comes with being the first modern 2-way player alone should keep these (and other) Shohei Ohtani rookie cards viable for quite some time.  Even if Ohtani posts less than superstar numbers.  However, if he does live up to the hype (as we expect he will) collectors everywhere will be hopping right back on the Shohei Ohtani bandwagon (and probably acting like they never jumped off in the first place).

In conclusion, whether you plan on going short or long, at only 25 years of age, Ohtani is a good bet for this year and MANY more to come.