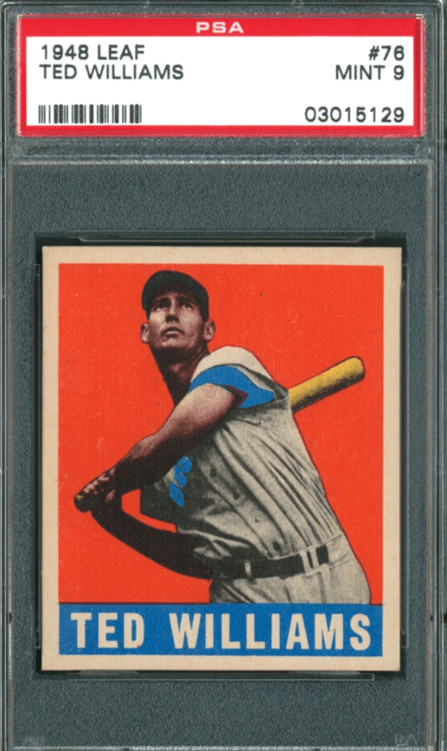 Looking to invest in a Ted Williams baseball card?  Putting your money on a true American icon is never a bad idea (perhaps we shouldn’t say NEVER but you get the point!).  Unlike current baseball stars whose careers could still take a devastating downturn (or be lost to injury), the story has already been written on Ted Williams.  And it’s a BRILLIANT one.  That means, when you invest in a Ted Williams baseball card, you’re investing in something capable of passing one of the most important tests.  The test of time.  So before we take a look at some investment options, let’s take a closer look at that brilliant story we talked about earlier.

To truly understand why a Ted Williams baseball card is a solid long term play, you need to understand what Ted meant, not only to the game of baseball, but the country as a whole.  Williams was born in August of 1918 and began playing baseball from an early age.  And he didn’t look back.  By the time Ted was in high school, he had gained the attention of two of the most iconic MLB teams:  the Yankees and the Cardinals.  However, Ted turned both teams down and later joined the Boston Red Sox in 1939 where he won Rookie of the Year and went on to bat .406 in 1941 (the last player to reach the .400 mark).  But then things changed.

By 1942, the United States had just entered World War II and was in need of some heroes.  Ted answered the call.  Emphatically so.  The young star joined the Navy Reserve in 1942 and was later commissioned as a second lieutenant in the United States Marine Corps in 1944.  Williams graduated at the top of his class at Pensacola Naval Air Base and opted to choose combat over a service team.  When given a chance at discharge, Williams refused and went on to serve his country through January 1946.

Come 1946 and Ted Williams was ready for some on-field heroics.  In his first season back in action, Ted led the Red Sox to the World Series where the team won 3 games before falling to Stan Musial and the Saint Louis Cardinals.  Although that was the only Wolrd Series he would play in, Williams racked up the individual achievements such as 2 Triple Crowns, 6 batting titles, 2 MVPs, and 521 career home runs.

This incredibly brief summary of what Ted Willimas meant to both the country and the game of baseball illustrates why you should feel comfortable investing in a baseball card with his picture on it.  He’s a TRUE ICON.  Here are a few to think about! 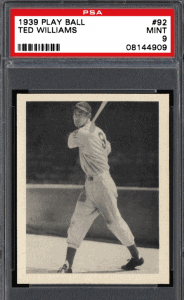 This is the one to strive for.  A Ted Williams rookie card that illustrates just how much cards have changed over the years.  No refractors, holograms, or jersey patches.  Just a wide-eyed Ted Willaims swinging a bat.  Grade 8 cards are incredibly rare and should have no problem fetching around $20,000.  Grade 9’s are even rarer are currently worth well over $100,000. 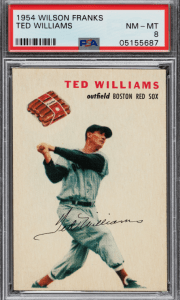 When it comes to old baseball cards, condition is everything.  And it’s incredibly hard to find one of these in good condition.  Why?  Probably has something to do with the fact they were stuffed inside slimy packs of hot dogs.  Even a grade 6 should bring in well over $10,000. 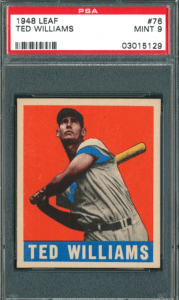 Lookswise, this one is BY FAR our favorite of the bunch.  The stern, skyward gaze on Ted’s face says it all.  It also commemorates a year where Ted was incredibly locked in at the plate, winning the triple slash triple crown with an absurd .367/.497/.615 slash line. 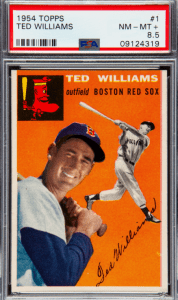 A classic set that includes two Ted Williams cards.  The first of which features Ted in front of a red background with the bat over his shoulder.  This is one of the more affordable cards on the list.  For instance, grade 7s are ONLY going for $1,000 to $2,000 right now. 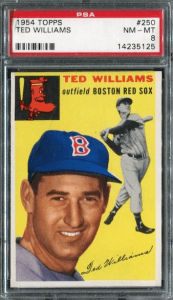 The second card from this iconic Topps set features Ted in front of a yellow background.  This card appears to be the more valuable of the two and can bring in as much as $20,000 for a grade 9.  By the way, Topps likes this one so much that they included it in their new Topps 2020 project.

Looking for a modern icon?  Take a look at these Barry Bonds rookie card options!

While some of these prices may not seem like “bargains”, over the long haul they should be.  Sure, the card market will fluctuate, but true legends like Ted Williams will always stand tall in the end.  Take the 1939 Play Ball Ted Willimas baseball card for example.  We already told you that you should expect to pay well over $100,000 if you want to own a grade 9.  But guess what you would have had to pay only 15 years ago?  Somewhere between $20,000 and $30,000.  Somewhere someone is enjoying some profits!

And if you are looking for a short term play?  Take a chance and see what you can get after a year or two.  If you don’t like what you see you can always hunker down for the long haul.  TRUE icons stand the test of time.