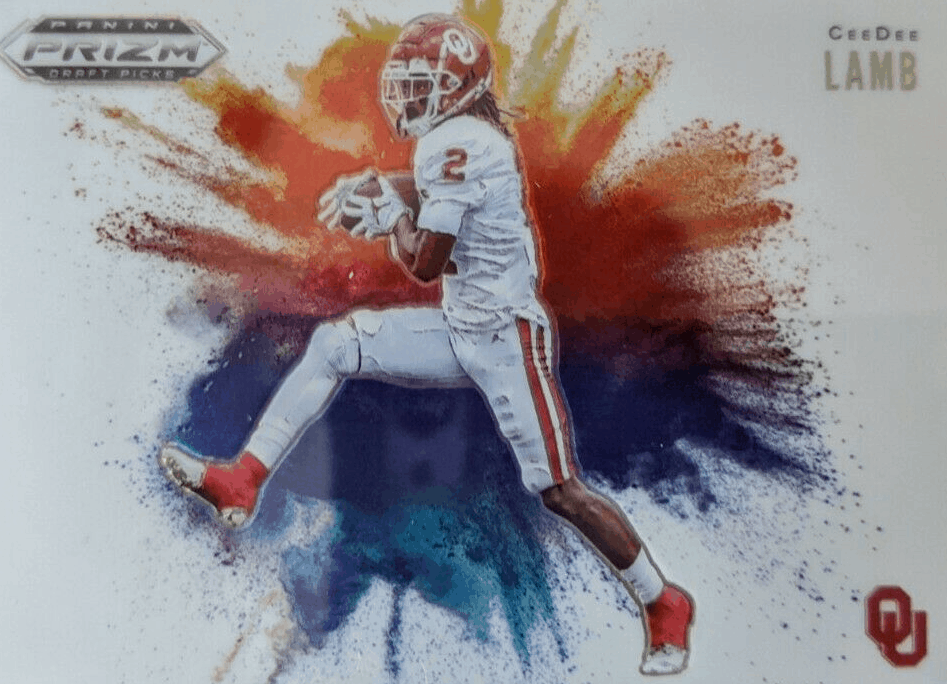 When Dak was the one slinging the pigskin in Dallas, CeeDee Lamb rookie cards were looking good. But in a stroke for bad luck for the first-year receiver, Prescott got injured and put quite the damper on Lamb’s performance. So was the season a wash? It depends on how you look at it. While Lamb certainly would have put up better numbers with a full season of Dak, his final numbers ended up being more than solid. After all, few would argue that nearly 1,000 yards receiving without your first-string QB isn’t pretty impressive. Looking forward to the 2021 season, we’ll have a healthy and PAID Dak Prescott. Meaning this offseason may be a good time to buy one of the following CeeDee Lamb rookie cards!

Rather make a play on a more proven player? Here are a few Rob Gronkowski rookie cards to consider. 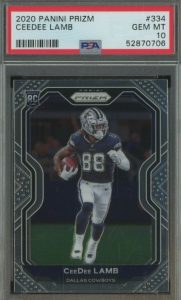 The most popular set in the football card game delivers plenty of CeeDee Lamb rookies cards from across a variety of price levels. Feel like making a big splash? Seek out a rare Prizm variation or a card with an autograph. Or at the other end of the spectrum, grab a couple of ungraded base cards if you’re not looking to part with too much. Either way, you’re investing in one of the biggest collections in the sports card industry. 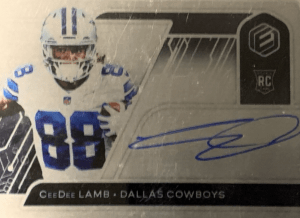 This is a set that was featured in our Clyde Edwards-Helaire rookie card review. Just a great all-around set that gets its name from the periodic table of elements. Now that may sound dorky, but take one look at the cards and you’ll change your mind. One card that we like is the Cobalt, which is one of the harder to come by “elements” in this set. If you’re looking for a more common (and thus less expensive) element seek out the Golds. Regardless of the metal you go with, you can’t really go wrong here. 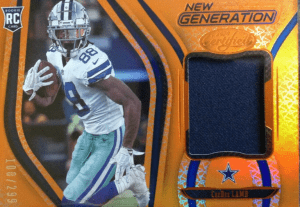 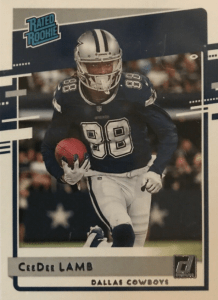 One of the top sets for NFL rookie cards. The more common CeeDee Lamb rookie cards are the Jersey Number, Season Stat Line, Aqueous Test, Canvas, and Red Press Proof parallels. Looking for the ULTRA -rare? Look for a Black Press Proof or the rarest or rare LONE Black Press Proof Die-Cut card. Get your hands on that one and you’ll be the envy of all your collecting/investing bros.  STATEMENT CARD! 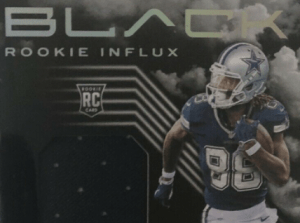 A new set that debuted in 2019, the Panini Black is quickly becoming a favorite among many collectors (we included). There’s the base rookie set and there are the souped-up Rookie Patch Autographs. Once again, it’s all about your budget. Silver, Copper, Emerald, and Gold parrels are some of the best options when it comes to CeeDee. 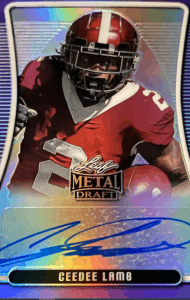 We’re not sure why this set seems to be one of the outcasts in terms of the NFL rookie card market. It’s specifically made for draft picks and the cards are more exciting than most of its competitors. However, excitement doesn’t ways equate to value. So if you’re looking for some cool CeeDee Lamb rookie cards that won’t break the bank, this is your set.  Look for the Touchdown Kings variation! 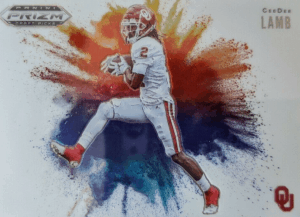 While the regular 2020 Panini Prizm football set has yet to arrive, the Draft Picks off-shoot is on the market. Two of the best cards from this set are the Color Blast shown above and the Prizm variations that show CeeDee sprinting for daylight in his Sooners uniform. Can’t go wrong with either option! 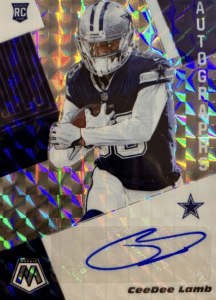 The 2020 set from Mosaic is now on the shelves and it’s offering some really intriguing CeeDee Lamb cards. One way to celebrate the wideouts first year in the league is the aptly name NFL Debut card that shows CeeDee breaking away with the ball in one hand running straight at the camera (almost as if he’s trying to jump out of the card!). Meanwhile, the set also offers a standard version that comes in a variety of parallels along with an autographed version that shows the receiver with both hands on the ball (ready for a big hit?). So far Mosaic has been a pretty big hit this year, especially with rookies.

As you would expect, pretty much every set released so far includes an autographed version of their CeeDee Lamb rookie cards. However, the ones that seem to be popping up mist often are from the Panini Chronicles Draft Picks set. Other noteworthy sets offering a CeeDee Lamb autograph card are National Treasures, Mosaic, and the Leaf Metal Draft shown above.

If you were holding a CeeDee Lamb rookie card when Dak went down you were certainly disappointed. To say the least. However, all is not lost! Dak will be back in full health and oplaying with the confidence of a man with a new contract in 2022. On top of that, CeeDee will be another year older and should be able to build off what he learned in his rookie season. Expect and even more effective 2nd-year campaign and don’t be surprised if he winds up in the Pro Bowl. At the end of the day, you should be able to turn a nice profit by the end of the 2022 season. 9/10

Along the same lines as the short play, buying now when the market takes a pause could be a good idea. It’s hard to see CeeDee Lamb not being a force for years to come. And most young players only get better as they mature. Therefore, it only seems like a matter of time before Dak and CeeDee make a playoff run together (the defense can’t be this awful forever can it??). On top of that, once Dak does return, CeeDee seems all but a lock to make his first Pro Bowl team. 8/10

We’re always reluctant to go long on an unestablished player. But if you are thinking about stashing one away, Cee Dee Lamb could be a good guy to do it on. We’d just rather hone in on the short or medium-term profits and save the long-term approach for more sure-fire items such as the most valuable Aaron Rodgers rookie cards. 3/10

3 Investments We Like Better Than CeeDee Lamb Rookie Cards