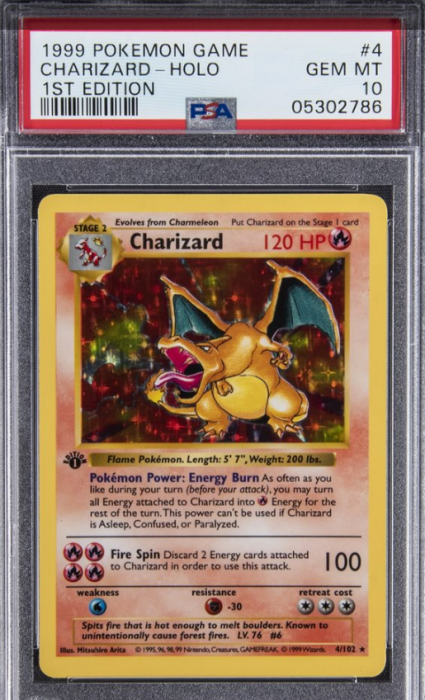 Some collector’s may think that owning a First Edition Charizard card is a pie in the sky fantasy. Think again. While some of the most expensive First Edition Charizard cards are certainly out of reach for many, there are a few options that should fit the budgets of even the most casual collectors. So whether you’re seeking a record breaking Charizard purchase or looking to make a lower risk investment, there should be a perfect Charizard out there waiting for you. The only question is are you going to give the infamous dragon a new home?

Anyways, on our Top 5 First Edition Charizard list we’ll be covering cards with values from high to low. That means all you have to do is figure out what you can afford to spend. Chances are there is a card out there with your name on it! Let’s take a look at some options. 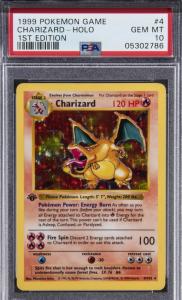 We start with the most outrageous. The true first edition holo seen here in PSA 10 GEM MINT form is a BOHEMOTH of a card. In more ways than one. Not only does it feature the monstrous Charizard, but it’s also is capable of brining in some truly mind-blowing sale prices.

So what is the best First Edition Charizard PSA 10 valued at? Take a deep breath, this is going to get crazy. While it’s not the most recent sale, this card was plucked out of an auction house in March 2021 for nearly $400,000. Just $250 shy of that figure to be exact.

Since then values have declined a bit but still are firmly planted in the outrageous category. For instance, 6 months after that big sale another PSA 10 sold for just $270,600. Either way, rest assured that these will continue to hold incredible value for a long time to come. 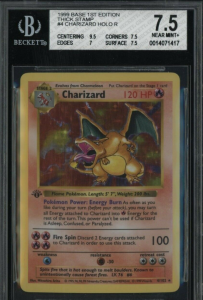 Now we go from the truly absurd to something that is a bit more doable. Just PSA, BGS also grades Pokemon cards. And 7.5 can bring in some big bucks. Just nothing close to the First Edition Charizard PSA 10 value. For instance, one of these recently sold on eBay for just under $7,000. A high price to pay, but compared to $400,000 it seems like chump change. 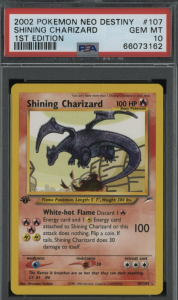 By the way, not all Charizards with a First Edition label are from the original 1999 collection. Sometimes cards from later sets can be highly sought after collector items as well. For example, the 2002 NEO Destiny Charizard shown above recently sold for just over $12,000. So if you’re interested in a PSA 10 but don’t have a quarter of million to spend on one, try seeking out the tried and true Neo Destiny collection. While it may not back the punch of the original, it’s certainly a card worthy of your attention. And speculation. 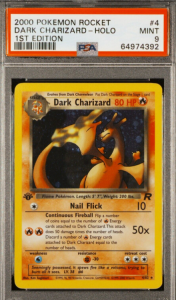 Let’s not forget about the classic Dark Charizard from the 2000 Pokemon Rocket collection. Earlier we focused on cards that you’ll need to spend thousands on to own. Since that simply isn’t an option for casual collectors, we’d thought it be a good idea to feature some budget buys.

The card featured here is a PSA 9 and should be available for hundreds, not thousands of dollars. For that reason alone it’s a great idea to limit your search to the dark version of ole’ Charizard if you’re being priced out of some of the big boys. A true gem that holds plenty of clout and should remain a coveted item well into the future. 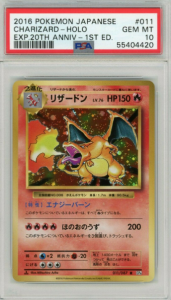 Sure some may argue that this isn’t a TRUE First Edition Charizard. Since it’s more of a celebration of that epic first collection in Japan, they may have a decent point. Nonetheless, it still says 1st ED on that PSA label doesn’t it? Hey, not everyone can afford to take out a second mortgage for a Pokemon card can they?

Anyways, this is an amazing option for anyone that has a few hundred bucks to spend for a PSA 10 Charizard with a first edition tag. It’ll look good in the case and should appreciate just fine in the long term.

Trending Topic: Take a gander at the world’s most valuable YuGiOh cards!

Earlier we mentioned the most previous two sale prices from a PSA 10 grade. While those are almost unfathomable numbers, the market wasn’t always this high. As early as 2019 it was a far different story. For example, a card with the same grade sold on eBay for just over $36,000 in December of that year. Safe to say whoever made that purchase is one happy camper. Especially, considering it went up ten-fold in value within the following 12 months. Whether it was a stroke of pure genius or one of pure luck that prompted the purchased, it certainly was a move worthy of the utmost respect.

As far as current values go, there hasn’t been a sale for far in 2022. Therefore, it’s hard to tell where the market is at. However, a good way to get an idea is by comparing PSA 9 and PSA 10 prices as there have been plenty of 9 grades sold this year. Here is a complete list of 1st Edition Charizard Pokemon cards sold with a PSA grade if you want to get a decent idea of where current values are at.

As you can see from the cards above, the picture on the front of the card depends on what type of First Edition card you’re looking at. As a result, new collectors can become easily confused when trying to sort the whole thing out. So let’s make it easy!

Check out the pictures of the first two cards featured in this post. That’s what the BEST First Edition Charizard picture looks like. Donning a cartoony look with tongue out and wings back, Charizard means all business in the original card.

Meanwhile, cards like the Neo Destiny and Dark Charizard tell a much different story. The picture on Neo is shows a much more toned-down of the dragon. In contrast, the Dark Charizard version features Charizard looking over his should as if waiting for an ambush. However, at the end of the day beauty is in the eye of the beholder. What’s important is that YOU like the picture on your 1st Edition Charizard card!