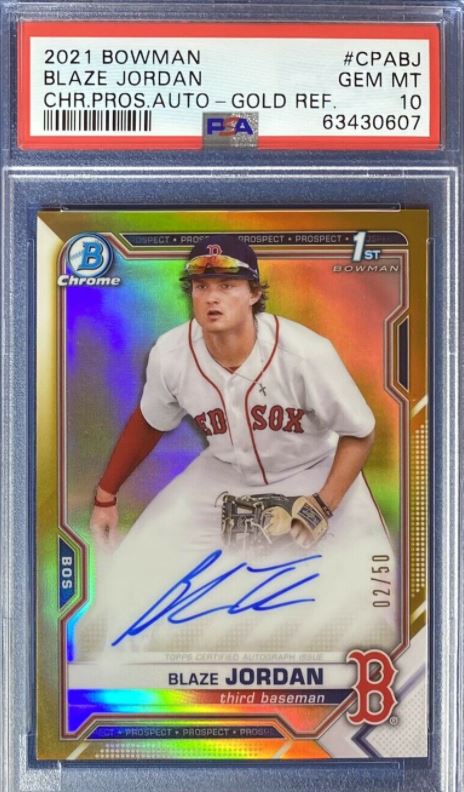 If you’re looking to get your hands on the top baseball card brands of 2021 there are two iconic names that come to mind. Topps and Bowman. While these brands control the industry now, it wasn’t always that way. Soon we’ll show you the best 3 collections from these industry icons. but first, let’s take a look at how they came to dominate the baseball card collecting industry.

Early Baseball Card Brands and the Emergence of Topps & Bowman

The first baseball collection was printed by Goodwin Tobacco in 1886. While the industry began in the United States, other countries like Japan in 1897, Cuba in 1909, and even Canada in 1912 soon followed. In the beginning, baseball cards in the United States were mostly produced by tobacco and confectionery firms. However, it wasn’t long before other companies such as the American Caramel Company jumped on the bandwagon.

While the beginning of the industry was perhaps a bit underappreciated, the 1930s ushered in a new era that saw the production of baseball cards BOOM. One of the most notable sets that came out at the time was the 1933 Goudey collection. It was a true innovator and included both Babe Ruth and Lou Gehrig. The set included 239 cards and featured player photos colored by hand in bright and bold tones that really POPPED.

Then in the late 40s, we began to see the brands we know today. Bowman was one of the first major producers with the Topps brand soon following. In due time Topps became the “Top Dog” after buying out Bowman and thus dominating the baseball card scene. However, Topps would reintroduce the “Bowman” brand in the late 1980s and now the duo form the top two brands in the industry. 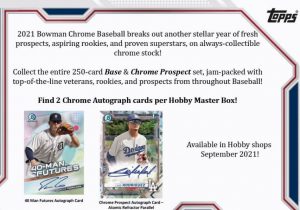 Bowman Chrome is the number 1 baseball card brand when it comes to prospects and has enjoyed quite the run over the past decade or so. While young players are the focus here, 2021 Bowman Chrome will be offering a nice combination of rookies, prospects, and superstars with plenty of exciting parallels, inserts, and autographed card options. In each hobby box, you can expect to find 2 mini boxes that include 6 packs each. Each of those packs will contain 5 cards so you’ll be getting 60 cards per hobby box. 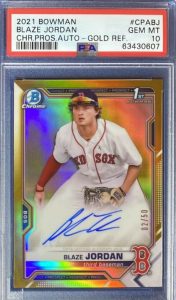 No pun intended but many pundits are expecting this kid to set the league aBLAZE at some point in the near future. He took the Bryce Harper route of finishing his high school career early so he could start his pro career ASAP. And that career has been great so far with 6 home runs and a .324 average so far in his first season. With the hype, the ability, and the big stage in Boston, this is one investment that screams “can’t miss”. 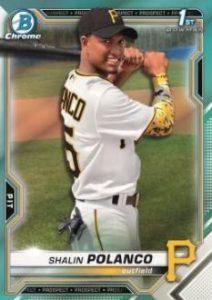 Top 30 International Prospect Shalin Polanco is sure to be one of the most sought-after cards to come out of the 2021 Bowman Chrome Collection. Keep your eyes peeled for this ultra-talent 17-year-old outfielder as you tear those packs open! 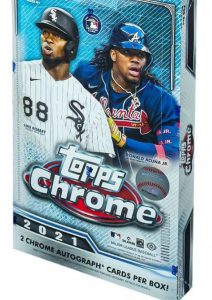 The 2021 Topps Chrome Hobby Box features two young players you may have heard of by now. Luis Robert and Ronald Acuna Jr. Not a bad way to start the party! At any rate, there are 24 packs in each box and 4 cards in each pack. Expect 2 autographed cards in each box as well. 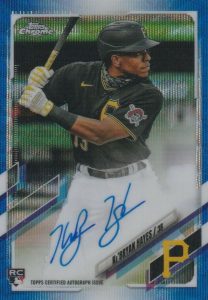 Despite having a horrific 2021 season at the plate, the former NL Rookie of the Year front runner’s cards are still the most valuable RCs in this collection. Bizarre! Besides a hot streak following his 2020 call-up, Hayes has shown nothing to make one expect big things in the future. In fact, his 5 home runs and .254 average in 295 at-bats in 2021 are MUCH closer to his overall minor league performance than the 5 home runs and .376 average over 85 at-bats that we saw in 2020. HARD pass!

After being shelved for a few years, Bowman has brought back one of its most lucrative collections. Bowman Inception easily stands out with a breathtaking design that can be seen in each one of its cards. Full of vivid imagery that serves to breathe life to each card, the artwork absolutely screams “high end”. As far as hobby boxes go, you can expect only 1 pack with 7 cards total. While your chances are limited, this is a classic “all killer no filler” set. Therefore, your chances of pulling something good are way higher than your average hobby box.

To most, the kid was the best prospect overall in the 2021 MLB Draft. Even though he was taken FOURTH! Either way, there seems to be nothing but promise here, and once ready Marcelo will be playing on one of the biggest stages in baseball. He’s already ranked a Top 10 prospect by MLB Pipeline so if you pull one of his cards in a box expect it to be worth some BIG TIME $$$$.