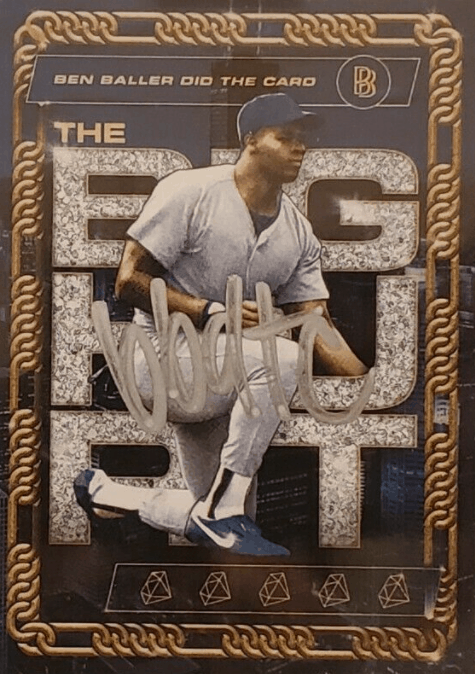 Topps Project 2020 Ben Baller designed cards seem to be incredibly popular with collectors. In fact, many of the set’s most sought-after, and most valuable, cards are coming from the hand of this incredibly talented artist.

But some may be wondering what on earth is Topps Project 2020??  For starters, the “project” consists of Topps reimaging some of its most iconic cards by giving the classics a fresh new look. On top of that, the cards are being designed not by baseball card photographers, but by artists. And not just any artists. Topps Project 2020 features cutting edge designs made by the likes of streetwear designers, one of the planet’s premier jewelry designers, and even tattoo artists.

Whether that sounds like something you’d be interested in or not, it should be. Why? Many of these cards are shaping up to be incredibly valuable! Especially the ones designed by Ben Baller. And that means, there’s plenty of potential for profits if you choose the right investment strategy. So buckle up and get ready to take a look at some of best cards we’ve seen come out of the set so far.

Related Content: 2020 Panini Football is officially on the shelves. Here’s a little preview of what you can expect! 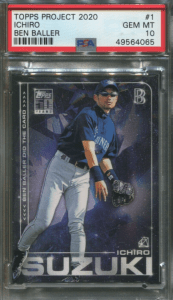 The card celebrates one of the most iconic rookie seasons of all time and offers a new take on the well renowned Topps card from 2001. It’s available with or without Ben’s autograph and features a black and silver color combo that oozes with style worthy of his last name! 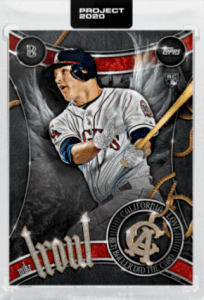 The classic 2011 Mike Trout rookie edition is reimagined by a few different artists, each putting their own different spin on the card. However, the Ben Baller rendition really stands out. A perfect take on the original card which captures everything that made it a classic in the first place. And let’s not forget those dark overtones we’ve come to expect in Ben’s work for the Topps 2020 Project. 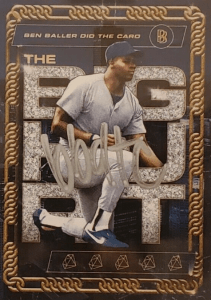 Ben once again proves he’s a baller by coming up with one of the most sought after designs from the Topps Project 2020 set. This one is a fresh take on the Big Hurt’s 1990 rookie card from Topps that became quite famous for being released without the slugger’s name on the front. Who’d have thought it’d turn out to be one of the most valuable baseball cards of the 90s?

As far as this retake goes, Ben adds his classic touch with a gold chain bracelet surrounding a dark background. The cards with Ben’s autograph are most valuable with sale prices varying depending on what color the ink is. 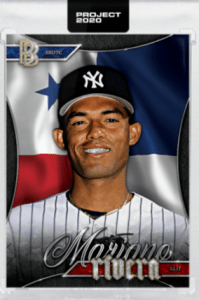 Make way for the only player to EVER be elected into the Hall of Fame unanimously. Although we’re sure Derek Jeter has something to say about that. Anyways, there are quite a few options but one of the less common parallels recently sold for nearly $2,000. However, if you’re not looking to spend that much try for one of the more common editions that often sell for a few hundred bucks or less. 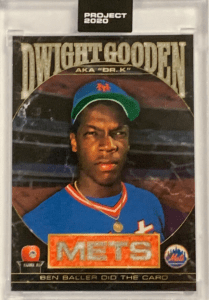 The card reminds us of just how good Doc really was. And apparently, other collectors feel the same as it’s been commanding plenty of attention at auction. There are a few different parallels and they come with or without the artist’s autograph. Either way, you’ll be getting a card of a generational talent that had the chance to be the modern-day Bob Gibson. The fact the Doc squandered that opportunity almost adds to the appeal in our opinion. 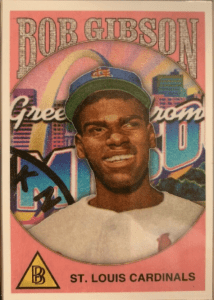 Speaking of Bob Gibson, there are many renditions of his 1959 rookie card included in the Topps Project 2020 set. However, Ben Baller’s unique take on the legendary card is our personal favorite. And judging by the steady value of his 1959 Topps Bob Gibson recreations, we’re not the only ones that feel this way!

Ben Baller certainly seems to be the artist producing the set’s most valuable cards. However, there are plenty of options of the cards we’ve listed made by other artists. For instance, some of the most sought after cards in the set are the Mike Trout renditions by the artist “Ermsy”. Additionally, Blake Jamieson has also created a few Mike Trout cards that are doing quite well in the market.

In addition to Ermsy and Jameison, other designers and artists include (but are no means limited to) Mister Cartoon, Jacob Rochester, Tyson Beck, Andrew Theile, and Don C.

The set has been rolling out new cards throughout the year so there is not an official “release date” for the entire set. However, we are nearing the end of 2020 so expect a steady release of the remainder of the cards. As of right now, Topps shows we’re at 328 out of 400. We’re definitely excited to see what’s in store!

We liked this Topps Project 2020 card so much that we included in our Mark McGwire rookie card review!

We’re closing in on the end of the year, which means the last of the 400 card set is on the way. While there’s sure to be some cards that generate plenty of hype, it’s hard to get an idea of how the set will do over the long run. Therefore, we’re only comfortable with short term play here. Regardless of how much we LOVE these cards (as you know from how we talk about the Donruss “Downtown” inserts, we love art/cartoon designs). Watch the market closely and sell for a nice profit if given the opportunity. Just try not to get caught holding the bag if the bottom falls out!