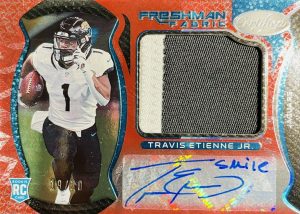 With many collectors banking on the notion that he’s going to continue the college dominance into his NFL days, it’s no surprise to see plenty of interest in the first Travis Etienne rookie card releases. After all, the Clemson Tigers have risen to great prominence over the past few years and one of the most pivotal players during the run has been none other than Etienne. He’s had a very spectacular college career for the Tigers. To say the least.

In fact, Etienne was a key reason why the Tigers won the National Championship in 2018. In what turned out to be a season to remember, the then-sophomore running back gained 1,658 yards on 204 carries and struck pay dirt a whopping 26 times. But Etienne wasn’t done there. In 2019 he would follow up with a stellar performance in which he posted a grand total of over 2,000 all-scrimmage yards and 23 touchdowns. And in 2020 Etienne was once again a large part of why Clemson again made it to the playoffs as he began to show his skill as a passer catcher out of the backfield.

As you can see, it’s easy to understand why fans are excited about the Jaguar’s new rookie running back. Just like Joe Burrow and Ja’Marr Chase, Etienne will be reunited with the guy who helped create those special seasons at Clemson, Trevor Lawrence. Here are a few Travis Etienne rookie cards to consider if you think the duo is going to catch lightning in a bottle once again. 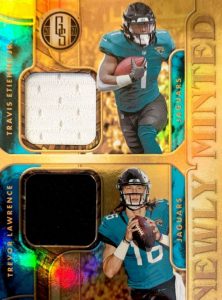 As you can see, Gold Standard features Etienne in his new NFL attire. Something we’ve been waiting some time for! The collection offers plenty of great options, especially if you’re after something in the higher-price range. One of our favorites is the card shown above with Etienne sharing surface real estate with new teammate and first overall pick Trevor Lawrence. A great card to own if both these guys live up to their talent going forward!

Another set that’s fresh off the press is Panini Certified. Our favorite Travis Etienne rookie card overall is the Freshman Fabric line. You can get these with an autograph and of course, the patch is standard. Hence the name. At any rate, a collection is an amazing option if you’re looking for something in the moderate price range. In addition to the Fresh Fabric, look for some eye-popping inserts and a tastefully done base card. 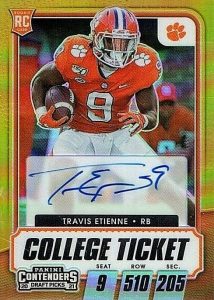 The College Ticket is the most sought-after card from the set and comes in a variety of different parallels. The one above is the elusive Gold Ticket thas has a print run of just 10. Not to mentions Etiennes autograph. When you consider both those factors it’s hard to believe that it’s still available for less than $200. Not bad for a guy that could very well be one of the best running backs in football next season. And we don’t mean only among rookies either. If you see one of these or something similar in your price range you know what to do. Scoop and score! 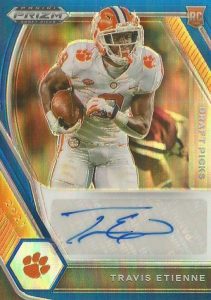 From the looks of the base card, it appears Travis is out in the flat ready to juke an unsuspecting linebacker after catching one out of the backfield. Abilities show why people are saying Etienne could be the next Alvin Kamara. Either way, Prizm Draft is always one of the most highly regarded collections of the year when it comes to fresh new NFL talent. Meaning, you certainly don’t have to worry about resale value as long as Etienne performs! 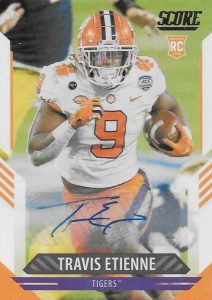 The card’s overall aesthetics is incredibly pleasing. For instance, the color pattern of the card matches up perfectly with the road uniform Etienne is wearing as he seems to be breaking away from the Notre Dame defense. At least that looks like the fighting Irish to us! At any rate, we’ll also go ahead and guess he’s headed towards a touchdown. What more could you want from a card named Score? Speaking of that word, you’d be wise to “score” one of these while they’re still available with an autograph for less than $100. 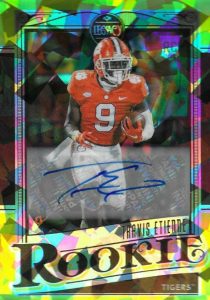 The 2021 Panini Legacy’s design reeks of prestige regardless of which version you decide to go with. Our favorite happens to be the stylistic “Rookie” version shown above. Why? The card captures exactly what we’re after – a Travis Etienne rookie card! It’s also a great card for casual to moderate investors as there’s plenty of options for under $100. However, if you’re looking to go big, pick up a Travis Etienne – Trevor Lawrence dual autograph card from this set. Sure it’s expensive but that dynamic duo could drive the value sky high by the end of the 2021 season. Jacksonville fans are certainly hoping so. 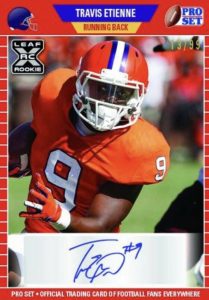 Once again we have a Travis Etienne rookie card with a color pattern that perfectly aligns with that of Travis Etienne’s jersey. One cannot help but feel nostalgic while glancing at this one as the card has a nice vintage look. When it comes to the photo, there’s not really a whole lot going on. Just a close-up shot of Etienne as he attempts to juke an oncoming defender. We recommend one of the /99 autographed cards for between $100-$200.

Travis Etienne had over 6,000 all-scrimmage yards and 78 touchdowns in his career and many of those TDs and yards game in some incredibly big games. For instance, in Clemson’s 30-3 win over Notre Dame in the 2018 College Football Playoff Semifinal, Travis Etienne had 14 carries for 109 yards and a touchdown. Additionally, Etienne tallied 86 yards on only 15 carries with 3 total touchdowns in the 2018 National Championship. And if that weren’t enough, he’d go on to have another 3-touchdown at the 2019 Fiesta Bowl.

In large part, Travis Etienne was selected as the 25th pick in the 1st round in the NFL Draft because of clutch performances on the big stage such as these. Now that he and Trevor Lawrence are picking up right where they left off, expect many more clutch performances in the future. And there are few things that can increase a card’s value like a HUGE game on a HUGE stage.

Another 2021 Rookie of the Year hopeful….

As we near the season these and other Travis Etienne cards are going to become more sought after. Therefore, if you buy a few months before week 1, your chances of making a quick profit by selling just before week one are excellent. That or you could always opt for bigger gains and trust in Lawrence and Etienne to impress right off the bat. Either way we think there’s money to be made here. 7/10

How successful Etienne is over the course of the next few years depends on how successful Urban Meyer is at rebuilding the franchise. Now that it appears he has many of the pieces he’ll need we won’t be betting against him. When the Jags finally make it back to the playoffs best believe Etienne will be a BIG part of it.