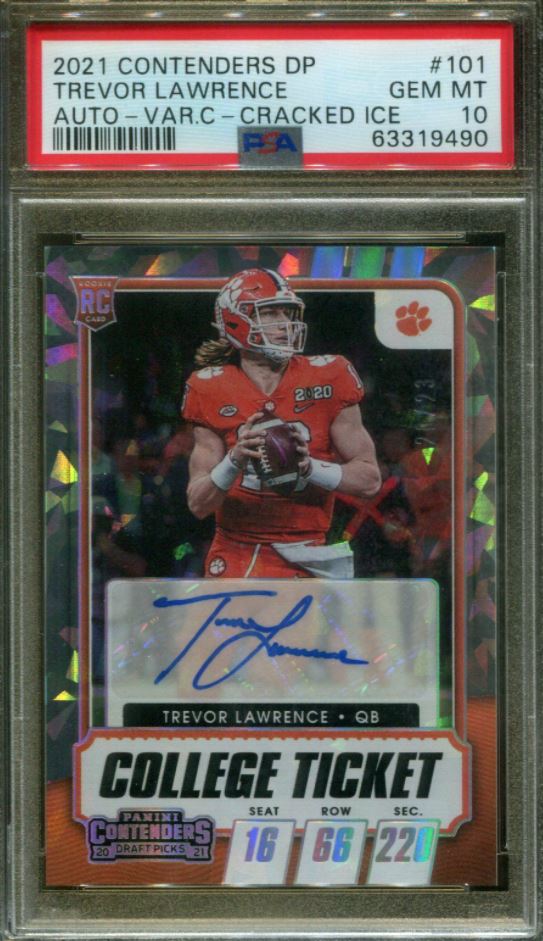 Perhaps you’re wondering if there’s a Trevor Lawrence Rookie Card yet? In the true sense of the word, no. However, there are a few prospect/college card options available. And for all intents and purposes, these can be considered Trevor’s first “rookie” cards. While the following may not end up being the most sought-after of his releases, they are some of the hottest cards on the planet RIGHT NOW. And for the moment, that’s what counts! Sometimes living too far ahead in the future isn’t a good thing. Or too far back in the past for that matter!

At any rate, often it’s best to live IN THE MOMENT. And now that Trevor Lawrence is officially a 1st overall pick QB, the moment is all his. So let’s not get too caught up on semantics and see what football cards feature Lawrence’s photo and are available in the here and now!

Now would be a good time to pick up a couple of these Joe Burrow rookie card options!

FINALLY. The wait is over and Panini has finally delivered its flagship “prospect” collections Prizm Draft and Contenders Draft. It’s incredibly close as to which is our favorite but if we had to choose (and we feel we do) we’d go with Contenders. There are just too many amazing parallels and inserts to choose from not to be enamored by this remarkable set. For example, just take a look at the beautiful Cracked Ice Trevor Lawrence rookie card above. Sleek, rare, and autographed. What more could you want. Find one in your budget and grab one before pre-season begins! 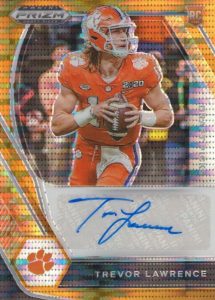 It’s really a 1-1A situation here but a close runner-up to Contenders Draft is the always impactful Prizm collection. The Orange Pulsar card above is one of the first true gems pulled so far as you can see by the condition, autograph situation, and color scheme. Did we mention it has a print run of just 49? Talk about one lucky collector! Just like the Contenders, Prizm has plenty of options that span a wide array of prices from the VERY HIGH to the casual. Simply put, a MUST-OWN card if you’re hoping to get into the market prior to the NFL season. 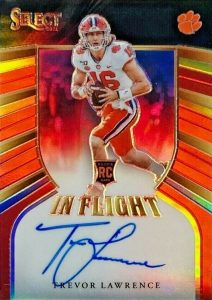 Panini Chronicles is known for being a “catch-all” as the collections bring together many brands from both the present and the past. We happen to like the Panini Select “In Flight” insert when it comes to Trevor Lawrence rookie cards. The card has a color pattern you can’t take your eyes off of and comes with Lawrence’s signature. Additionally, there are some incredibly rare parallels that are very valuable. Seek out that /25 if you’re looking for a hefty-sized investment. 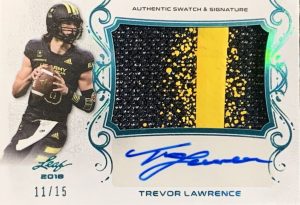 So far this is one of the most legit Trevor Lawrence rookie card options you’re gonna find. And the prices reflect it. There are a variety of different options but values can go as high as $2,000 for some of the more limited print runs. Sure it’s a big spend, but just think of what these might be worth in the days leading up to Lawrence’s NFL debut. 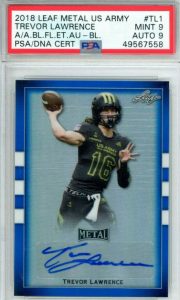 As you can see, this is another card that features Trevor in his Army All-American Bowl Uniform (spoiler alert: with the exception of one, they’re ALL going to be that way). Another similarity between this and the card above is its ability to bring in the dollars. 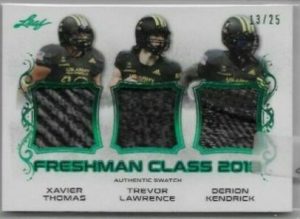 A sweet Trevor Lawrence rookie card featuring Clemson teammates and fellow NFL hopefuls Xavier Thomas and Derion Kendrick. When it comes to value, we’re getting into the area of a more moderate range investment. If you have a few hundred bucks lying around try to make one of these the latest edition to your collection! 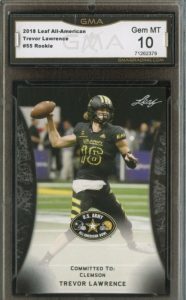 Just like the Leaf Metal edition we discussed previously, the All-American features Big Trev doing what he does best: slinging that football. However, unlike the Metal, this card won’t do a whole lot of damage to your bankroll. A casual pick-up for less than $200. No problem! 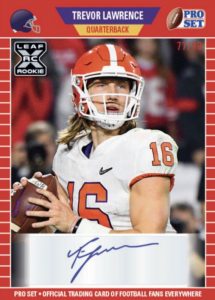 It’s baaaaaack. The iconic set known for its amazing hockey and football cards back in the 90s has been officially rebooted. And what a way to kick things off! QB of the future? Check. Retro reddish-orange background? Check. Official trading card of football fans everywhere? Check. The newest of new Trevor Lawrence rookie cards has already created shockwaves throughout the industry and is available with or without Trev’s autograph.

As far as value goes, these can really bring the heat. For instance, the card shown above has a print run of 99 along with Lawrence’s autograph and recently sold for more than $3,000 on eBay. While that may be too high of a price to pay for some collectors, others can take solace in the fact that the base card can be scooped up for somewhere in the $10 to $20 range. Like Too Short says “get it while the gettin’ is good!”. 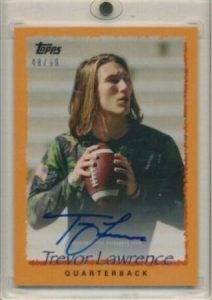 One of the most recent Trevor Lawrence rookie card options is the 2021 Topps X collection. And we gotta say, they really went all out on this one. In addition to plenty of great autograph options and photo variation, the set offers a wide array of stylish drawings of the Jags new QB. Some may think these are a little over the top but for players with this kind of potential for both on-the-field success and off-the-field star power, it’d be a mistake not to go a little bit overboard. Value-wise, there are all kinds of great options in the moderate to casual investment range.

Just like Pro Set, Score is a bygone collection that Panini has brought back in recent years. While not as popular as in its heyday, Score does a good job at giving collector’s a “first look” at some of the most exciting talent about to enter the NFL. And when it comes to exciting talent, does it get any more exciting than Trevor Lawrence? At any rate, this one makes for a great moderate to casual investment if you’re not looking to break the bank on your Trevor Lawrence rookie card.

What About a Trevor Lawrence Panini Card?

Stay patient. They’re coming. And when they do, expect some BIG TIME prices. Not to mention an influx of increased buying and selling activity. As the Trevor Lawrence Panini cards start rolling out we’ll be sure to provide some updates here. Unfortunately, some of these Leaf cards may be kicked off the list once that happens!

When will we see the first Trevor Lawrence NFL Card?

Well, he’ll certainly need to be drafted before we can see him in his future NFL uniform (who gets smart with their own FAQ??). Expect to see some cards with Lawrence in his Jags jersey once the big flagship sets from Panini start hitting the shelves later this year (2021 Prizm, Mosaic, and Donruss collections). Additionally, we’ll get some new Trevor Lawrence Clemson cards once the “Draft” sets like Prizm Draft and Contenders are released.

Question of the day: Will Trevor Lawrence come close to having the kind of rookie season that Justin Herbert did?

“While being the number 1 pick is pretty much a given, that doesn’t mean the draft is totally priced in. As we move closer to draft day the cameras will begin rolling and all eyes will be focused on Trevor Lawrence. As we all know, the right kind of press is never a bad thing for trading card prices. Expect some short-term gains from the draft and leading up to the NFL season.”

We hate to pat ourselves on the back (we really don’t), but we nailed the part about short-term gains leading up to the draft. For example that Pro Set card we talked about was going for $2,000 when it first came out. And as we just said, now it’s going for $3,000. Sure, there may be a small pullback but we expect prices to go higher leading up to the season and WAY higher if Lawrence delivers the goods in his rookie season. 9/10

It’ll be hard to resist those easy short-term profits. BUT, if you stay patient you’ll likely be rewarded for holding onto your Trevor Lawrence rookie card investment. He’s too talented not to be winning within the next few years. And if he starts to emerge as one of the game’s best? Safe to say prices will REALLY start to fly. 9.5/10

It’s not every day we would think about stashing a card away for the long haul on a player who’s yet to take an NFL snap. However, Lawrence is a special talent. If things fall into place, you could easily see 1000% gains or more years down the road. Overall this isn’t our favorite course of action but we wouldn’t blame anyone for wanting to take a flyer here. 7/10