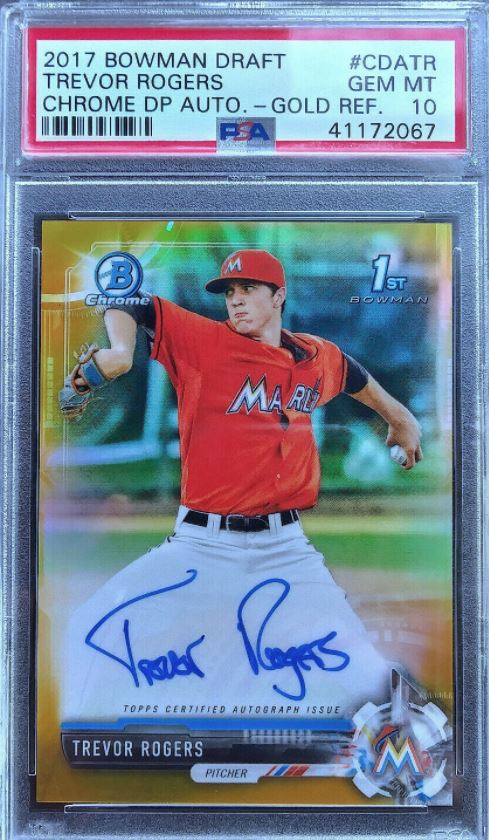 Since the day he was confirmed as the Marlins’ 5th starter heading into the 2021 season, the Trevor Rogers rookie card market has been getting some attention. Before his lights-out spring training, many collectors’ had probably had never heard of the guy. However, a spring that produced 29 strikeouts over just 19 innings combined with a sub 3 ERA started turning some heads. And one could argue after the 1.75 ERA and 70 strikeouts over his first 56 innings of 2021, his first-year cards still aren’t getting the attention they deserve. Fortunately, we’re here to help change that!

Before the season began, Roger’s first year/prospect cards were sitting at incredibly affordable prices with many of the highest values recently selling for less than $200. However, that’s changed a bit following the sudden rise to near ace status. Now those same cards can be found selling for more than $300. However, given his early track, values are STILL incredibly affordable compared to where they may be going. What we’re trying to say is go pick up a Trevor Rogers rookie card while the gettin’ is good! Here are a few options!

Check out what Trevor Lawrence rookie cards are available so far! 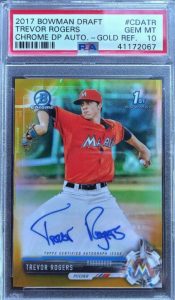 This is far and away Roger’s most valuable option. But even these haven’t begun to climb to the heights they could be heading for if Trevor has a rookie season to remember. For instance, the 10/10 Gold Refractor BGS GEM MT card shown above sold for less than $ 250 as recent as February 2021. 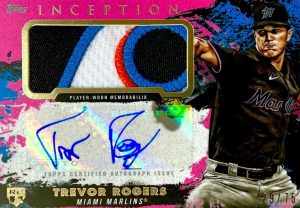 A high-end collection of cards with a limited checklist. With a hobby box only containing a handful of cards they better be high-end! At any rate, there are some decent true Trevor Rogers rookie cards in this set. Look for an autograph and a number on the front for the highest values. However, still very affordable as even these have recently sold for less than $100. 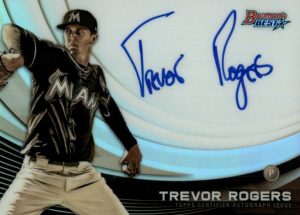 Now if you really want a card that is quick and painless to acquire, here it is. All kinds of options for less than $50 in this collection. And that even counts cards that are numbered AND signed. For example, the autographed card with a print run of 125 shown above is currently valued at less than $20. Dig in! 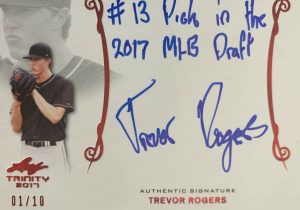 While Leaf certainly isn’t known for baseball cards, there’s one thing we should all give the brand credit for. And that is its uncanny ability to be the first to market. In many cases, you’ll see a Leaf prospect card far before any of the big-name brands start rolling out. And that goes for other sports as well. Just check out these Ja’Marr Chase rookie cards if you don’t believe us! At any rate, this is a solid choice with plenty of low-risk options. Even the autographed /10 card above is valued at less than $100 at the moment.

As the big-name sets of the year start to roll out, be on the lookout for some amazing true rookie card options. A couple of sets we’re looking forward to the most are the 2021 Bowman Chrome and the 2021 Topps Chrome collections. Both won’t be out until later this year (late July for Topps and late September for Bowman) so you’ll have a full season to watch Trevor pitch and THEN decide whether or not you want one of his rookie cards from either collection.

We had our doubts but he just crushed an opening day home run….

Could things be looking up for the Ke’Bryan Hayes rookie card market?

What we said before the season:

“This is an incredibly risky move at the moment as your investment will solely rely upon Roger’s performance in his debut season. Something that’s a tall ask of any MLB rookie. However, at the same time, it could pay off handsomely if he goes on to make a run at Rookie of the Year honors. At these prices, we’re willing to take a chance. Just not TOO willing. Adding only a card or two is fine for now.”

As you can see we were a tad worried about how Rogers would fair in his rookie season. Consider those worries gone. Long gone. While he may not be sitting at a sub 2 ERA at the end of the season, we’re expecting more of that elite-level performance he’s shown dating back to spring training. Oh, and keep an eye on that Rookie of the Year chase. We have a feeling he’s gonna bring it home!

“The longer you’re willing to hold the less risk there is. Typically. But in the case of Trevor Rogers, we’re dealing with a guy that came out of NOWHERE to become a Top 10 prospect that baffled spring training batters all spring long. We’re willing to take a short-term flyer but aren’t thinking anything further than that for the moment. Unless of course, his 2021 performance warrants a second look.”

At this point, we’re starting to change our tune. Let’s see how he finishes but we have a feeling we’ll be holding onto a few of his cards into next season.