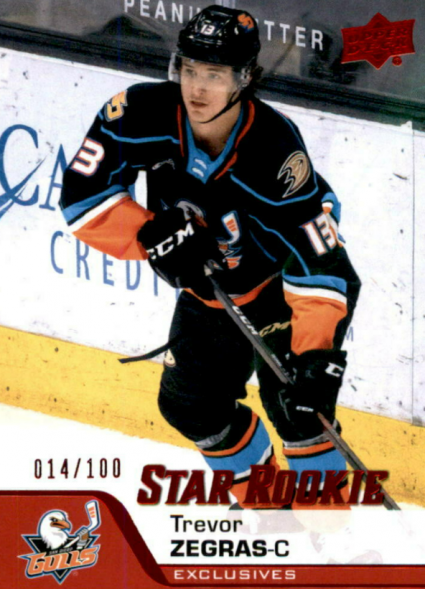 Anaheim’s first round pick from the 2019 entry draft is already starting to make a name for himself in his first official season. Therefore, more and more fans and collectors alike will be drawn towards the idea of a Trevor Zegras rookie card purchase.

The left handed center from Bedford, New York got his first taste of the NHL in the 2020-21 season. And he more than held his own. In only 24 games Trevor collected 13 points and averaged just over 15 minutes on the ice per game. This season both his points and average time on the ice per game have both risen and the rookie now finds himself neck and neck with Lucas Raymond for the Calder Trophy. Needless to say, continued production like this will make the following cards even more attractive than they are now.

The Kirill Kaprizov rookie card market is just getting started! 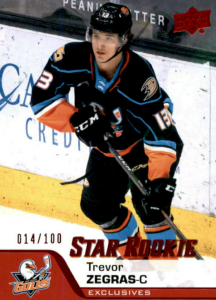 The card above has skyrocketed in value over recent months as Zegras has begun making a name for himself. It features Trevor in his San Diego Gulls jersey looking cool and collected as he decides what to do with the puck. Something we’re already seeing a lot of now that he’s in the NHL. Anyways, this is one of his most valuable rookie cards on the market so far and one worth you’re consideration. 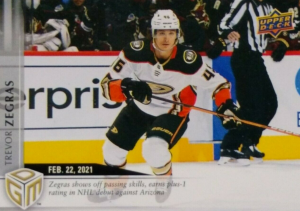 As we wait for the Trevor Zegras Young Guns rookie card we have the Game Dated Moments edition from Upper Deck to hold us over. The cards features Trevor gracefully gliding down the ice in a real game moment from his NHL debut. So if you’re not in the market to break the bank on the Young Guns, consider a casual investment in this one. 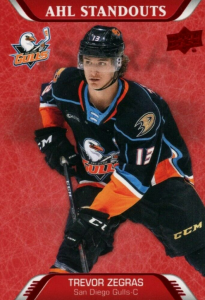 Another Trevor Zegras rookie card that recognizes his performance while in the AHL. Zegras is again in his AHL jersey wearing an intense gaze that isn’t at all diminished by his eye shield. Like the card above, this is an easy pick up for anyone who’s not ready to go big on their investment. Therefore, you’ll be able to stock pile multiple cards for just a small portion of your bankroll.

If you pony up for one of the cards above (or one of the cards coming over the upcoming months) you should be able to do well in the short term. Zegras has now played in enough games to be confident in his NHL track record so we’d expect his performance to continue. And if he beats out Raymond for the Calder? Icing on the cake!

While a short term investment may be tempting, you’ll have to remember that at age 20 Zegras is just getting started. For many players even bigger strides take place during their 2nd and 3rd seasons. If that happens you may end up regretting taking profits after year one. A tough decision to be sure, but saving some Trevor Zegras rookie cards for a longer term investment approach makes plenty if sense.