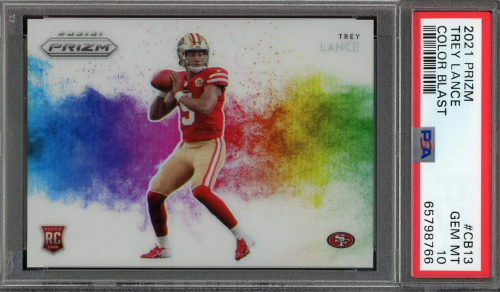 With all of the hype surrounding the potential breakouts of both Trevor Lawrence, it appears the best Trey Lance rookie cards are going a bit overlooked. So if you’re not familiar with this future pigskin delivery service, please allow us to fill you in!

Trey Lance is best known for his monster 2019 season at North Dakota State where he threw for 28 touchdowns with ZERO interceptions. That season Lance also took home the prestigious Jerry Rice and Walter Payton awards and ended up winning the NCAA Division I FCS Championship for the cherry on top.

But even before this remarkable sophomore season, Lance was considered to be the best quarterback prospect in his home state of Minnesota. Despite these high accolades, most colleges wanted him to play cornerback or safety instead. Of course, he declined these offers and decided to pursue his dreams of being a quarterback by heading to a cream of the crop FCS team, North Dakota State. Once there Trey Lance began starting in 2019 and put together the sophomore season we just talked about. But there wasn’t much of an encore as 2020 Lance played the shortest college football season ever consisting of just one game before being chosen as the third pick in the NFL Draft in 2021 by the San Francisco 49ers. And now that Trey Lance is poised for a breakout season, now could be the perfect time to buy one of these 10 rookie cards! 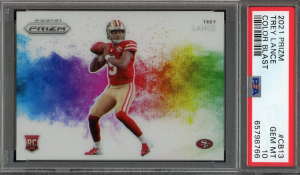 The flagship set from Panini is now available at hobby shops across the country and hobbyists are showing up by the truck load to scoop them up. On account of all of the red hot Trey Lance rookie cards inside those boxes no doubt.

At any rate, there are plenty of great options to choose from here. From casual collecting to high value investments, it’s all here! 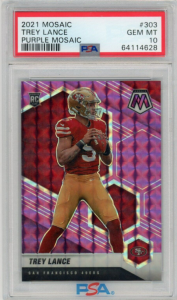 Mosaic has made a name for itself as a high-quality brand that won’t cost you nearly as much as Prizm. Just like the set above, there are plenty of great first year Trey Lance cards within the collection. Simply hone in one something you like within your price range and make it happen. 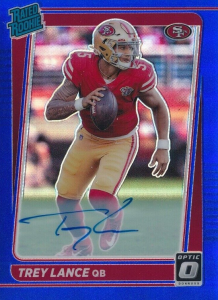 We can’t honestly cover the best Trey Lance rookie cards on the market without mentioning Donruss Optic. It’s the high quality answer to the regular collection and loaded with tasty Rated Rookie Trey Lance cards. Again, some of these cards might be a bit expensive but if you hone in on a base card or common optic you’ll be able to find something on a budget. 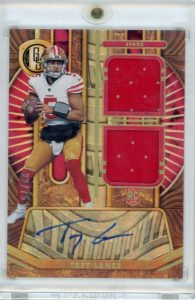 While not as popular as the last two collections, Panini Gold Standard really knows who to bring it in terms of value. This incredible gold-clad release from Panini is no doubt something to behold. And something to hold in your hand as well. One grip of the card and you’ll instantly notice the quality. Just be careful when you handle it! Firm, shiny, and heavy, Panini Gold Standard has just about everything you’re looking for in a high-end card. Looks wise, it just so happens to be our favorite release of the year.

Going back to value, the Golden Debut /5 autographed insert has already sold for north of $6,000. Of course, if you don’t want to go THAT big you can always hone in on one of the more common parallels like the /75 Dual Patch auto above for nearly a tenth of the price. Don’t let the bling scare you though. There are some great options available for less than $200 as well. 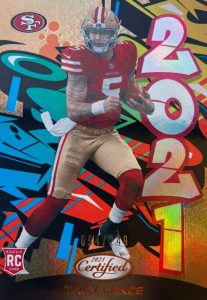 Simply put, Panini Certified is one of the best collections to date if you’re hoping to pick up a one of the hottest Trey Lance rookie cards. Whether you want to go about it in the aftermarket or by ripping packs, you’re in good shape. There are so many great options it’s almost hard to decide what to go with. If you’re looking to unload a decent amount of cash try searching for a “Freshman Fabric” autographed card. Or, if you’re looking for something more casual, the 2021 insert card featured above makes for a great easy pick up. 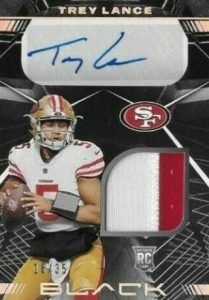 Just like the Gold Standard set we discussed earlier, Panini Black is suited towards collectors who have a hankering to go BIG. For instance, there is only 1 pack per hobby box. Guess how much that ONE PACK will set you back. Well over $500! That said, the set is loaded with incredibly valuable cards and Trey Lance is at the forefront. So if the Panini Gold style rubs you the wrong way, Panini Black is where you need to look. 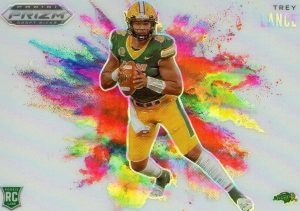 The two most anticipated pre-draft Trey Lance rookie card editions have finally arrived and safe to say we ARE NOT disappointed. Our favorite option of the two is the 2021 Panini Prizm Draft collection. The set is loaded with amazing options including the Color Blast insert shown above and the Gold Prizm at the opening of this post. Both cards are valued at well over $1,000 and make for great high-end investments. If you’re looking to dial it back a bit try picking up a Prizm without an autograph as there are plenty of options available for under $100. 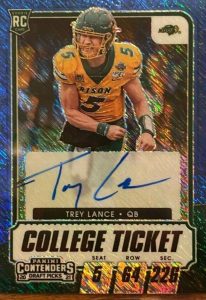 Many would argue that Contenders Draft and not Prizm Draft is the top collection for pre-NFL Debut rookies. While we slightly prefer Prizm, it really is like splitting hairs as both offer an amazing selection of cards. 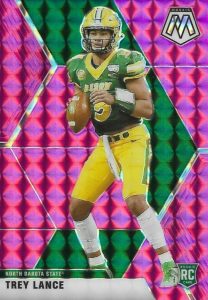 The new brand from Panini has had quite a warm welcoming by football fans thus far so there is sure to be plenty of excitement over the 2021 Mosaic Draft collection. Already someone has pulled the incredible rookie auto Gold Prizm which has a print run of just 10. Selling price? $1,080. Not too shabby. If you’re not looking to spend that much seek out a non-auto Prizm such as the Pink shown above. In addition to the large variety of Prizm options, there are plenty of cool inserts in the set such as the Rookie Scripts. Without a doubt some of the best Trey Lance rookie cards available featuring college uniforms. 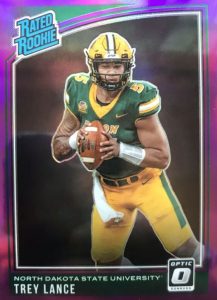 Another new release, this one the high-end Draft collection from Donruss. Optics has carved out a niche as one of the top sets for high-end football and basketball cards and the tradition carries on with this new release. So far we’ve seen plenty of great Prizm options for less than $100 such as the Purple shown above. 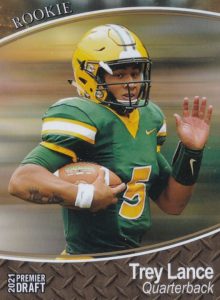 While these cards are less popular than the set that’s coming next, they seem to be holding their own in terms of value. Especially the ones that include Lance’s signature. For instance, the rare 1/5 Green autographed card recently sold for more than $800. But if you’re looking for less risk in your investment you can find some options for as low as $5 as well. Just a matter of how confident you are in Lance’s play. 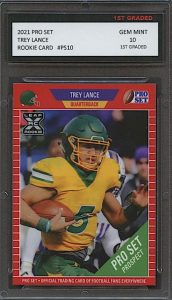 Since Lance has yet to play a game for the 49ers, the card art still includes him in his Bison’s uniform. And that’s just fine by us as it’s hard not to like those unapologetically ugly uniforms! There are all kinds of options available right now for well under $100 which is an absolute bargain when you look at what the Zach Wilson and Justin Fields Pro Set rookie cards are selling for. Although, if you want something that makes your card a bit more special, consider picking up one that includes Lance’s signature. Sure, these are going to cost you a bit more but if he lives up to the hype you’ll be glad you got the ink. On the flip side, if he turns out to be a bust, well there goes your money right down the drain. 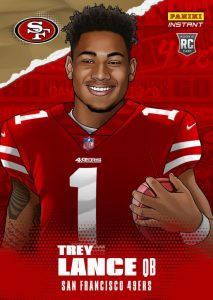 Last but not least we have a Panini Instant Trey Lance rookie card. Unlike the first two sets we covered, these cards feature Lance in both his college uniform and his new Niners uniform. While the 49er’s card is a cartoon drawing, you have to hand it to Panini for coming up with an easy way to get the new uniform out on the market. Additionally, look for the “Incoming Class” SSP card that features Lance rolling out of the pocket in his Bison’s uniform along with an autograph at the bottom. Right now, these don’t seem to be as valuable as the previous two options. However, there haven’t been many sold yet so we’ll keep ya posted.

If they’re out there, we certainly haven’t come across any yet. And since most of these collections have just started showing up on shelves in recent months it may be a while before we do so. Especially with how bogged down PSA has been lately. That said, they WILL show up eventually. Once they do expect to see the market rise to a whole new level. They’ll be pricy but could be WELL the price you’ll need to pay to snag one if Lance is as good as we expect he is.

Speaking of  “3rd best in the draft” quarterbacks….

Here are some MUST-OWN Justin Herbert rookie cards to load up on going into the 2021 season!

Now that the rookie season has come and gone, the next big thing that’s going to move the Trey Lance rookie card market is the start of the regular season. While we should get a nice bounce from that alone, it’ll take NFL success to drive prices higher. We have a feeling that won’t take long now that Trey Lance is the starting QB. Buying one of these now and selling on the news of his first start should net you some EASY profits. Of course, if you want the BIG profits, you’ll need to find out how he actually plays once he’s under center. 8/10

Lance should get every opportunity to succeed in 2022. Whether not he will is anybody’s guess. However, the fact that the 49er’s seem tailor-made to his playing style makes us think that he’ll find his stride at some point over the next few years.

While he didn’t have a whole lot of college experience, the scouts and coaches were more than ready to jump all over the young QB from North Dakota as soon as he declared for the draft. Something that gives us confidence going forward. In fact, the lack of experience could be a good thing if you’re looking for an excuse on why he didn’t make an impact in 2022. Either way, there should be some great moments in the following years.