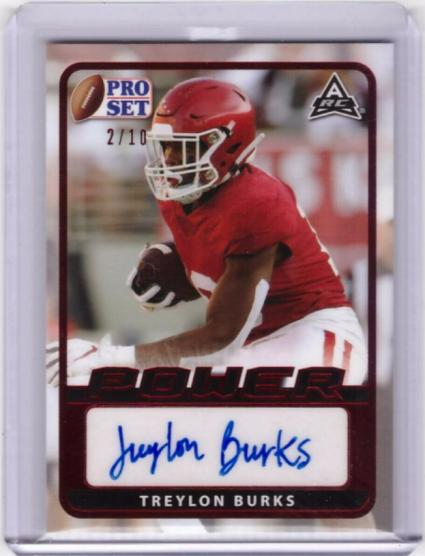 With the 18th pick in the 2022 NFL Draft the Titans scooped up a player they hope will become a corner stone of their offense for years to come. And with that, many collectors will targeting a Treylon Burks rookie card as a cornerstone of their 2022 NFL trading card portfolio. And why not? The kid was a beast at Arkansas and is a favorite to win the Offensive Rookie of the Year award. Both of which good reasons to consider a speculative investment here. Especially the latter. But what cards are out there? Not many. However, there are a few great options to target if you want in on the early market action! 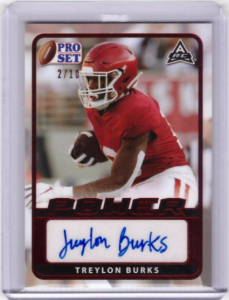 The first card we’re interested in is this beauty from Pro Set Football. The collection has led the way over the past two years when it comes to being the first to act on the NFL’s brand new rookies. Something fans are sure to appreciate. Even if the cards only feature players in their college uniforms, it’s always nice to be able to pick up a card BEFORE the season arrives.

Attire aside, the card shows Burks making a move on an unseen defender. And likely making the poor guy look like a laughing stock! At any rate, the card comes in a variety of rare parallels so look for those to increase the value of your investment. In addition to the parallels, you’ll also be able to pick up one of the very first cards with Burks’ autograph. Lot’s to love, little to scoff at. 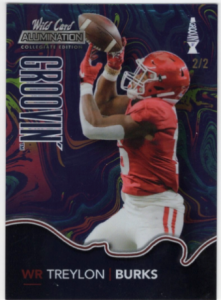 When first taking a gander at this Treylon Burks rookie card it’s hard to tell whether he’s hauling in a catch or about to pop a 3 pointer. Given the sport he plays we’ll go ahead and assume the former. However, what’s not in dispute is the sheer stylistic quality of this card. In addition to the action shot, you’ll notice eye-popping colors and a layout that grabs the viewers attention and refuses to let go. And when compared to the prices of Pro Set, casual hobbyists can afford to load up on several of these without damaging the bankroll. 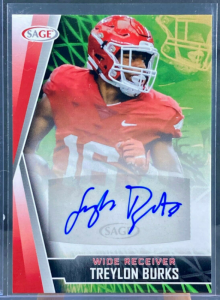 Last we have a modest little addition from the good folks over at Sage. While these aren’t the most valuable cards, they do offer amazing bang for your buck when it comes to getting autographs on the cheap. So if ink is important to you, look no further. Especially if you’re not looking to shell out hundreds of dollars.

Aside from the affordable prices, Sage offers a fairly decent design with a double image of the Burks and a cool array of colors.

Question of the Day – Which receiver will have a better NFL Debut, Treylon Burks or Drake London?

Not to be confused with Panini Prizm, the Draft collection offers a first look at players from the most recent NFL Draft. Hence the name. While the cards won’t feature the players in their new uniforms, the quality lives up to the Prizm name. Keep your eyes peeled for a late spring early summer release!

A mish mash of some of Panini’s top brands, the Chronicles collection will keep you guessing as you tear into your pack. Will it be a Prizm? Donruss? Mosaic? Who knows! what we do know is that with 12 different brands appearing in just one set, this is always a release we highly anticipate.