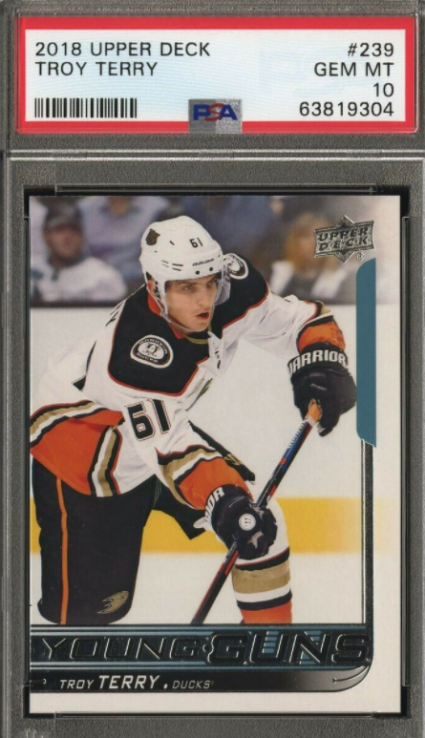 At age 24 Troy Terry has come out of NOWHERE to become one of the league’s top scorers. Something that clearly plays a part in the recent appreciation of the Troy Terry rookie card market. And while prices have risen, they’re certainly nowhere near as high as the first year cards of some of the other top scorers. Therefore, the market appears to be far from it’s peak. As long as Terry continues to find the back of the net that is. So before we take a look and the top 3 Troy Terry rookie cards, let’s see where the young forward was before the 2021 scoring binge.

The Ducks drafted Terry in the 2015 entry draft with their 5th round pick. Three years later he finally found the ice and played 32 games in his rookie season. And to say it was a modest season debut may be an understatement. In those 32 games Terry only managed to score 4 goals to go along with a measly nine assists. While his time on the ice increased over the course of the next two seasons, Terry’s production remained just as miserable. But then suddenly something clicked.

Flashforward to 2021-22 and Terry finds himself atop the leaders in goals only behind some of the league’s biggest stars. He’s also far outpacing his assist rate from season’s past and is the surprise star of the NHL season. But can he keep it up? If you think this is just the beginning now may be a good time to buy one of the following cards.

Speaking of up and coming NHL players… 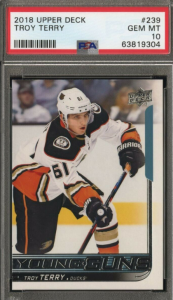 It’s hard to talk about modern day rookie cards without mentioning Upper Deck Young Guns. Year in and year out Upper Deck delivers the “Young Guns” by featuring some of the most promising first year players. While Terry certainly didn’t seem to fit that description, he has a Young Guns rookie card nonetheless. We’ve recently seen the Clear Cut variation sell for close to $1,000. The one above is no slouch either commanding nearly $300 as a PSA 10. If a Troy Terry rookie card is what you’re after this is the place to start. 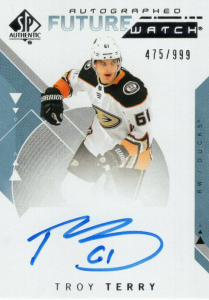 Another amazing card that features the freshest talent in the NHL is Futures Watch from the SP Authentic collection. Some of the less common autograph cards can easily hold values of well over $300. However, the more common like the /999 above are available for far less. Pick a price range and have at it! 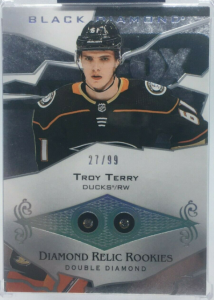 Even if you don’t have the gull to take on a Black Diamond on the mountain, don’t let that stop you. This card is at a price point you don’t have to be SCURRED of. We apolgize for the Luda reference. At any rate, the card is highly affordable. For instance, the one shown here is limited to only 99 cards in production. Estimated value? $99. Not a bad idea if you want something that’s a little more refined without that mammoth price tag.

3 Options We Like More Than a Troy Terry Rookie Card