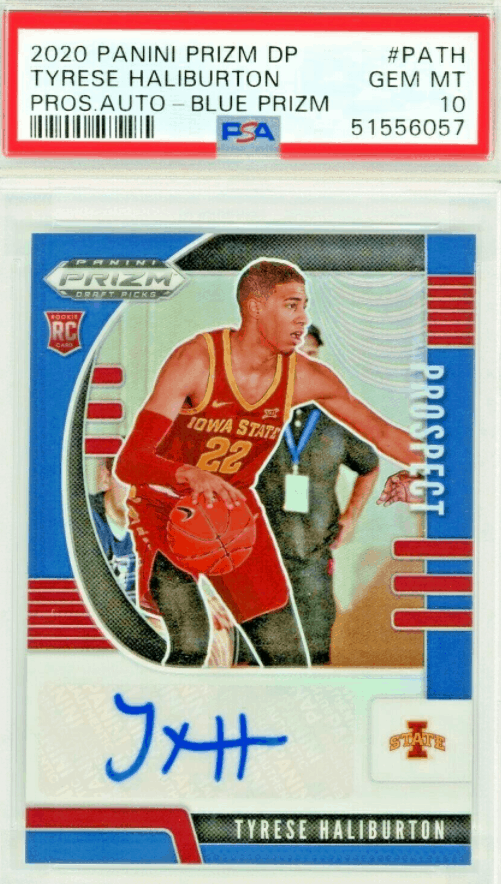 While it wasn’t at the top of most investors’ “must buy into” lists, the Tyrese Haliburton rookie card market is looking like it will be soon. Judging by the way he’s playing basketball SO FAR at least. And now that we’re almost at the halfway point of the 2020-21 NBA season, it seems we have a big enough sample size to know what we have in Tyrese. A special talent. Haven’t noticed? Vegas sure has. The King’s first-round pick point guard is on the short-list of NBA Rookie of the Year favorites. While Lamelo is the runaway favorite, Haliburton has entrenched himself as the clear-cut runner-up. Ahead of the likes of both Anthony Edwards and James Wiseman. By the way, those two went #1 and #2 overall, respectively. Enough said?

But what’s earned such recognition? Through the first month or so of the season Tyrese’s first taste of the NBA resulted in more than 10 points per game and a shooting percentage of over 50% from the field. And he’s only turned up the heat from there now sitting at over 13 points per game while maintaining that same lights-out field goal percentage. Add to that a healthy 3 pointer rate of 43%, more than 5 assists per game, and a free throw percentage well over 80%, and you have the making of what could be a magical rookie season. If it holds up the rest of the season, you’ll be kicking yourself if you don’t pick up one of the following Tyrese Haliburton rookie cards! 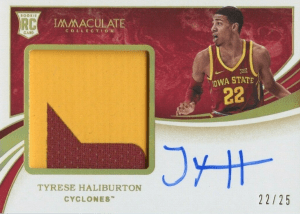 Immaculate isn’t typically known for being one of the higher-end options but this card is bringing some serious heat when it comes to value. There are only 25 in existence so it’s fairly rare. If you happen to see one hit the market expect to spend at minimum $500. 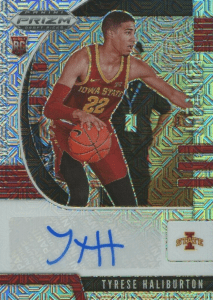 Just like the Immaculate card above, there are only 25 of these out there so you’ll be paying for the rarity. However, this one won’t hurt your wallet quite as much. Ungraded cards can still be picked up for less than $400. Of course, that could all change in another week if the performance keeps up! 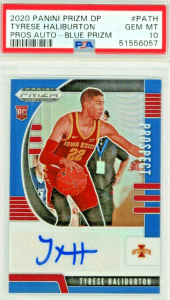 There are quite a few of these out there so the odds of finding one may be a bit better than the Mojo we just listed. With a print run of 149, this card is accessible to investors who are only looking to throw a few hundred at a card. 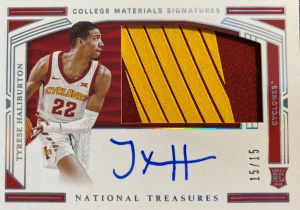 National Treasures Collegiate is always one of the top sets to turn to for an early jump on a high-end rookie card. This card certainly fits that bill. It has a print run of 15, a patch, an autograph, and a horizontal layout that features Haliburton in his Cyclones uniform looking to make something happen. Considering finding around $1,000 to invest and you can make something happen too! 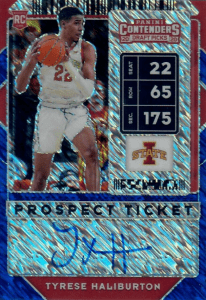 Just as the name suggests the card is a deep blue along the edges and a silver “shimmer” across the face. Look to spend between $400 and $700 if you want to add an ungraded version to your collection. 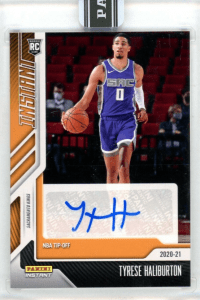 Instant has gotten the “regular” set season rolling and is offering some great Tyrese Haliburton rookie card options. Why so great? For starters, these are some of the first cards you’ll see that feature Tyrese in his brand new Sacramento uniform. On top of that, there’s a wide variety of values to choose from. The card above is a /10 Orange parallel that is one of the most valuable to hit the market so far and is valued at less than $500 pre-grade. Once the 1/1 Black is found we’ll see some higher values. Looking for something less costly? Hone in on one of those /25 Greens! 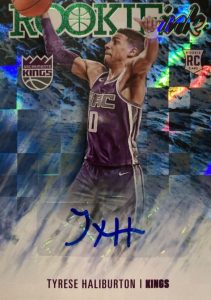 While the ole’ NBA Hoops collection isn’t the most sought-after of Panini’s yearly NBA releases, they are one of the first to the market. And to be honest, the set looks pretty good from the few Hobby Boxes we’ve broken open so far (with no success, unfortunately). At any rate, there are some good middle-range Tyrese Haliburton rookie cards to consider here. If you’ve got a few hundred bucks to spare you can get a rare autographed card that should be looking great come the end of the season. And beyond, for that matter!

Other great 2020-21 basketball card releases will be hitting the shelves shortly so we’ll keep you posted as they arrive. Like the Crème de la crème 2020-21 Panini Prizm release! When new arrivals worthy of our list enter the fold this listed will be updated with everything you need to know about the new release. As new sets arrive we’ll tweak this list to reflect the recent additions. Some cards shown so far may say goodbye, but one thing’s for certain, there are some BIG Tyrese Haliburton rookie cards yet to come.

If you think the sample size shows Haliburton is here to stay, it would make plenty of sense to jump in now before prices get out of hand. Admittingly we were hesitant to buy in after the first few weeks but seeing how he has improved on an already great rookie season, were whistling a different tune. A purchase now could pay off nicely whether you sell at the end of this season or before the start of the 2021-22 season. 9/10

If you REALLY like what you see at the end of the season you need to start considering BIGGER returns on your investment. Just look at what happened to Luka Doncic in year two. Safe to say you’d be kicking yourself if you took profits after his rookie season. This could be a tough decision to make, but it certainly is a GREAT problem to have.

If you’ve read our recent NBA rookie content you know we don’t start thinking long term this early in a player’s career. See what happens the next two seasons before thinking 5 years down the road. Hopefully, Tyrese forces a situation where we’re one day considering a play like this. N/A

Looking for more than just a Tyrese Haliburton rookie card?