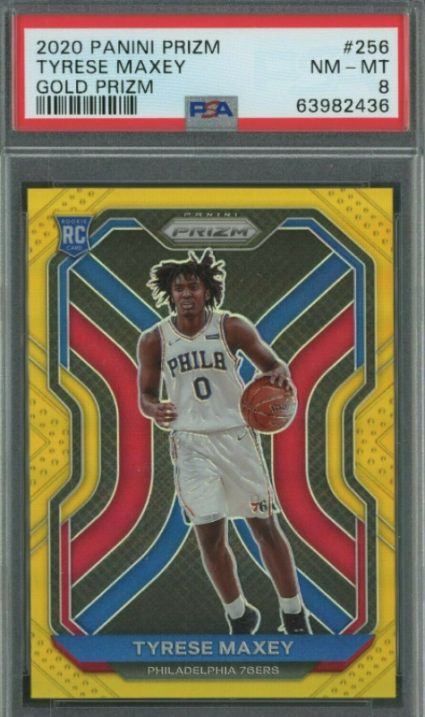 For all the hype surrounding some of the other big-name players making their debut in 2021, Tyrese Maxey may end up being one of the most overlooked players from the 2020 draft. Sure, LaMelo Ball and Anthony Edwards are well deserving of the praised they’ve received. But it’s hard to think of a player that took a bigger step forward his second and third seasons than Maxey.

After EXPLODING for 39 points in an early 2021 matchup against the Nuggets, Maxey followed up with back to back games of more than 15 points and 30 minutes per. Performances that were not necessarily expected from a rookie getting a feel for his first taste of NBA action.

Apparently those big games were not a fluke. In year two Maxey has done everything the 76er’s could have asked for and more. During the regular season Maxey average nearly 18 points a game to go along with almost 5 assists and 4 rebounds. And when post-season game around the kid has shown he knows how to handle the big stage. While the second season was a break out, Maxey’s third season is shaping up to be even bigger. Making it a perfect time to strike one one of the best Tyrese Maxey rookie cards. Here are some incredible options. 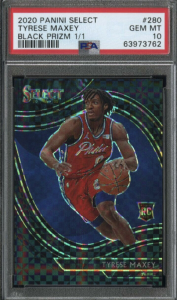 A set that’s absolutely loaded with some of the best Tyrese Maxey cards in existence. Don’t expect to come across the 1/1 Black Prizm shown above anytime soon but there are plenty of others options to feast on. If you’re in the mood for a Prizm you’ll find no shortage of cards to sink some real cash into. Looking for some ink? No problem! The collection’s Rookie Signatures line has that covered. Or maybe you’re a casual investor? The base cards from the set are a great target for folks looking to load up on some quality cards for just a buck or two each. 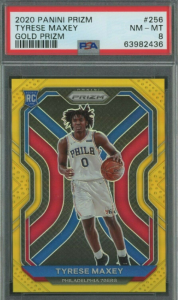 Now we’re talkin’. Panini Prizm did not disappoint with its Tyrese Maxey rookie card selection. Just like Select, Prizm has a plethora of high end investment options for those who want some real skin in the game. For instance, the Gold Prizm shown here is capable of brining in thousands of dollars even as a grade 8. If you’re after something a little more affordable try seeking out one of the other many Prizm formats that are more common. Simply put, Prizm has what you’re looking for. As always. 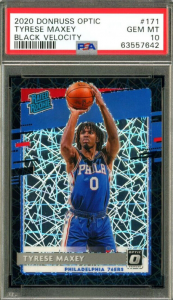 When it comes to pure style it’s hard to Match Donruss Optic. Not only do you get the classic rated rookie logo that Donruss is famous for, you also get the brand’s highest quality card. Slick, firm, and thoughtfully crafted. If you’re after a big money card look to some of the rare parallels such as the Black Velocity Optic above. Meanwhile, the base cards and inserts make for great casual options. 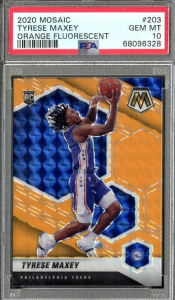 It’s no secret that Mosaic has been well received within the hobby. The set rivals the ones we’ve talked about previous in terms of both style and quality. With a wide array of prizms, inserts, and autographed cards it’s easy to see why the set has such appeal. And let’s not forget about Mosaics dedicated rookie lines. With out a doubt one of the top sets in the game. 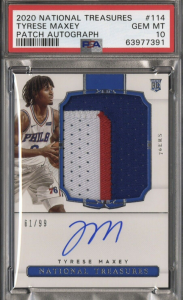 If you’re looking for the best Tyrese Maxey rookie cards in terms of value, look no further. This limited collections turns out some of the highest sales prices year in year out. Therefore, you can expect many of the most valuable first year Maxey cards to feature the National Treasures brand. 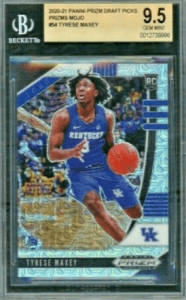 The Mojo Prizm featured above has a print run of just 25 and is a great higher-end investment option. However, if you’re looking to spend a little less there are plenty of more commons Prizms available. Another card we like almost as much as the Mojo Prizm is the Crusade insert. Rare, cool, and flashy. Grab one! 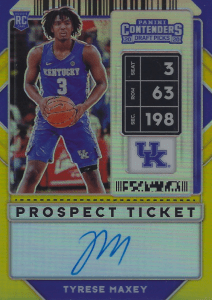 The cards to focus on in this set are the Prospect Ticket (shown above), Conference Finals Ticket, and Finals Ticket. They come in a variety of parallels and of course, are available with an autograph. We recommend the Gold Prizm Prospect Ticket if you’re looking to go big. If not, go with an autographed base card or one of the more common Prizms. At the end of the day it’s also about how much you want to MAKE, not just spend. 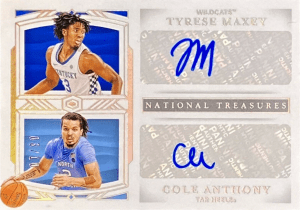 We rarely like investing in cards with 2 or more players but we’re definitely making an exception for the Maxey – Anthony combo shown above. It’s rare (print run of 10) and features 2 of the league’s best young players. Looking for something more substantial? Check out one of the “Booklet” options. 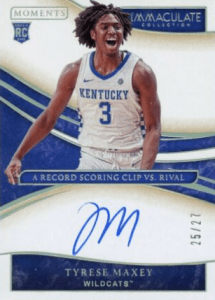 Panini Immaculate is loaded with rare and valuable Tyrese Maxey rookie cards featuring the old Kentucky uniform. Whether you’re looking for an autograph or a high quality base card, it’s all here. 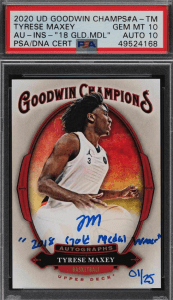 When it comes to bang for your buck, you really can’t go wrong with Goodwin Champions. The set features many high-profile NBA rookies but the one with the nonchalant Maxey confidently dribbling down court takes the cake. And the cherry on top of the cake? The fact that you can pick up many of the best Tyrese Maxey rookie cards from this set for well under $100.

Question of the Day: Would you rather have Tyrese Maxey or Cade Cunningham as your guard of the future?

That playoff poise we spoke about earlier speaks volumes. Maxey has shown that when called upon he has the ability to answer. In a big way. He seized the opportunity of the covid-thinned roster from his rookie season and simply hasn’t looked back. And hopefully never will! Incredibly hard not to see plenty of opportunities for profits within the next year.

It’s awfully tempting to hold for a few years and see what transpires (we’re sure there are plenty of Justin Herbert rookie card investors who were thinking short but couldn’t resist seeing where the road leads). Consider buying a few so you can sell for short term profits AND hold for larger gains down the road.

At this point a long term play is almost becoming reasonable. If you have a bunch of the top Tyrese Maxey rookie cards stashing one away for the long haul could end up being pure genius.