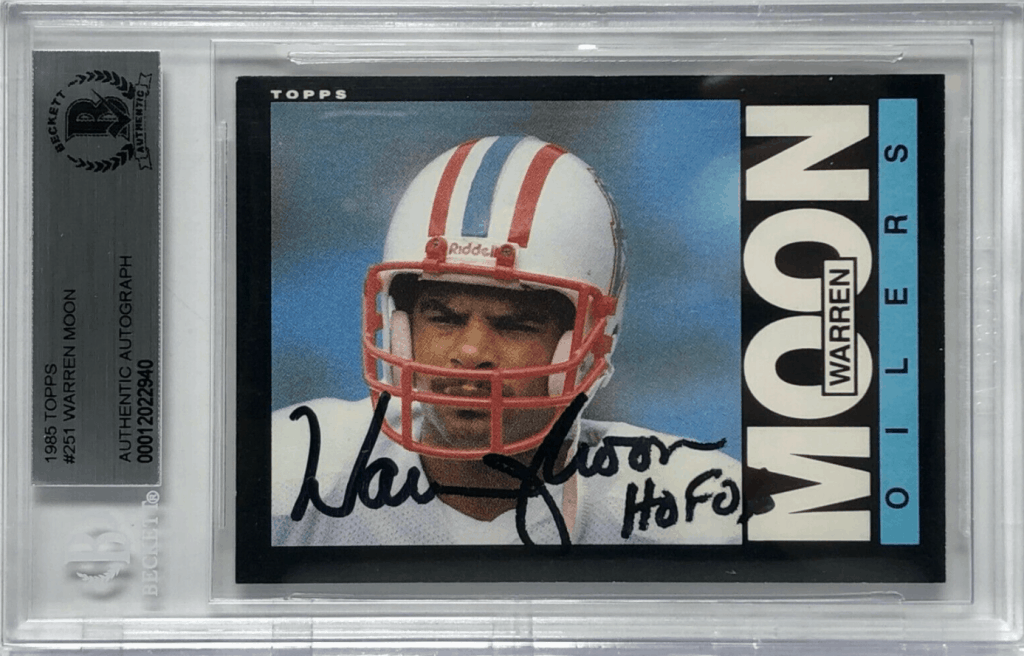 Thinking about picking up a Warren Moon rookie card?  As with many of the older players, there aren’t many options to choose from.  However, the cards that are available are definitely worth looking into.  We’re about to go over our Top 4, but before we do so let’s reflect on how great Warren Moon really was.

You may want to just buy an autobiography on Warren Moon because he is one of the most accomplished and interesting players in National Football League history.  And the same goes for the Canadian Football League.  In fact, when you combining both leagues, Moon has thrown for more than 400 touchdowns in his career putting him ahead of legends like John Elway and Fran Tarkenton.

If we listed every single Warren Moon accolade, there wouldn’t be enough space on this webpage, so we will just summarize it for you. Moon was a nine-time Pro Bowler, First-Team All-Pro, NFL MVP, NFL Offensive Player of the Year, AFC Player of the Year, NFL Man of the Year, member of the Titans/Oilers ring of honor, as well as a five-time Grey Cup Champion, two-time Grey Cup MVP and CFL Most Outstanding Player.  Yes, he was THAT good.

The College and CFL Days

Moon attended Washington in college and was the Pac-8 Co-Player of the Year in 1977. Somehow, Moon was unselected in the 12-round NFL Draft and decided to head North and try his luck playing in the Canadian Football League. Spoiler Alert: It turned out to be the right decision for Moon. Moon won a CFL-record five consecutive Grey Cup Champions, something that is unheard of to this day. In his final season in the CFL, Moon had 1,369 completions on 2,382 attempts for 21,228 yards and 144 touchdown passes. He also led his team to victory in 9 of 10 postseason games.

In 1984, Moon left for the National Football League to seek greener pastures as a member of the Houston Oilers. And it was was with the Oilers where many teams realized what a talent they had passed over in the NFL draft. Moon was an absolute stud, going toe-to-toe many years in passing stats with the great Dan Marino. In 1990, he led the league in passing yards with 4,690 and joined the likes of Marino and Dan Fouts as the only QBs to throw for 4k plus yards in back-to-back seasons. Moon also established new NFL records that season with 655 attempts and 404 completions.

Moon is now in the NFL and CFL Hall of Fames and is considered one of the greatest to ever lace them up. Owning a Warren Moon rookie card should be considered an honor if you can come across one in the right condition and shape. Let’s take a look at some of the best ones you can currently purchase. 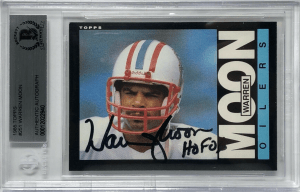 This is the most popular Warren Moon card that exists to date. It is a Topps Football card that pictures Moon is his helmet, possibly warming up or maybe thinking about what he wants for dinner that night for all we know. What we do know is that this is a great piece to have in your nostalgic card collection. 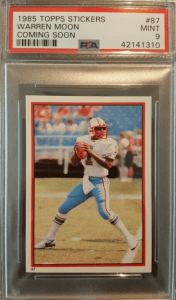 Another Topps card that pictures Moon on the cover launching the pigskin while wearing that classic baby blue and white Oilers uniform. Given that the Oilers are no longer a team in the National Football League, some old school fans may cherish the card even more.  If you’re on a budget this is the Warren Moon rookie card to consider. 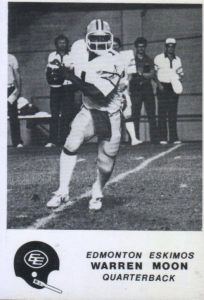 You’re not gonna come across this card too often. Clearly, it’s from Moons time in the Canadain Football League with the Edmonton Eskimos. The card is in black and white and must dates back to a time where Warren Moon far less appreciated that he should have been. This is a hard card to track down and would make a great talking piece for any collection.

Here are a few Drew Brees rookie cards to consider!

When it comes to these 3 choices, it’s all about how much you want to spend.  If you’re looking to open the wallet a bit go ahead and grab the 1985 Topps.  Looking for a more moderate investment that’s also an attention-getter?   The JOGO is definitely your card.  Or, if you only have a few bucks to spend take the cheap route and grab the Topps Football stickers.

Regardless of the card you pick, rest assured knowing that you’re investing in an NFL Legend.