Find a bargain on Willie Calhoun rookie cards on eBay! 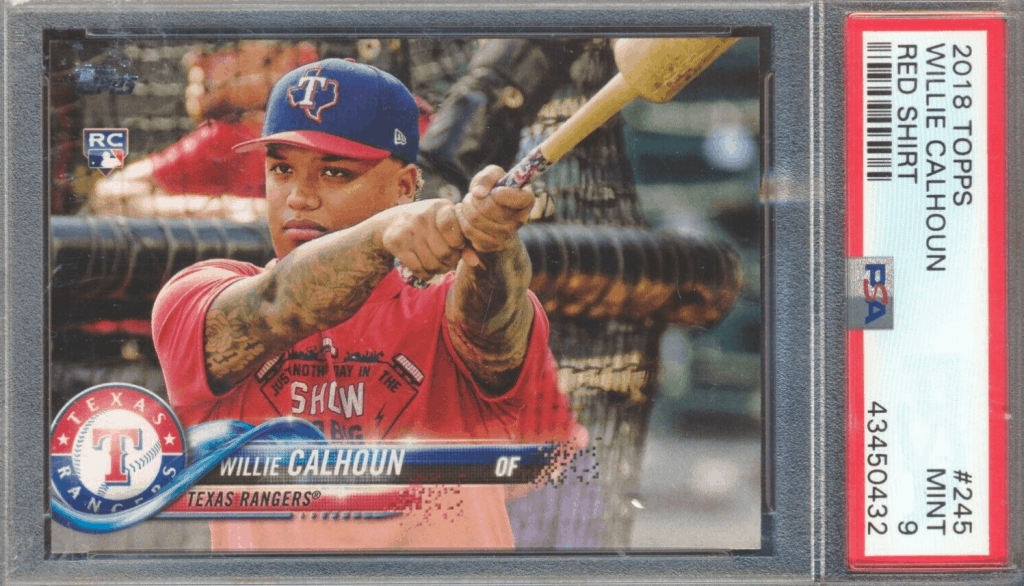 Believe it or not, now may be a great time to pick up a few Willie Calhoun rookie cards. We know, bold claim. But bear with us, please!

In 2019, Willie Calhoun showed some MASSIVE potential. In what was a breakout season for the young slugger, Calhoun posted 21 long balls to go with 48 RBI in only half a season of at-bats.  We, like many others, believed even bigger things are in store once he had his first full (and hopefully healthy) season in the bigs. However, that never happened.

Instead came an injury-riddled 2020 season where Willie only mustered 100 at-bats. And the lack of healthy time on the field wasn’t the worst of it. During the games where Willie was healthy enough to take the field, he managed just 1 homerun. That’s not a typo. ONE MEASLEY long ball. Quite a different ratio than his 2019 power production.

So instead of a breakout season, we received an injury-riddled one where on top of his power outage, Willie’s average didn’t break the Mendoza Line.

However, a far different story appears to be unfolding in 2021. Willie is FINALLY healthy and back to showing what made many so high on him in the first place. In just 81 at-bats, Calhoun is slashing .309/.378/.481 with four home runs. Not only that, he has the confidence of Woodward who states he’ll be playing every day regardless of when Khris Davis returns from the IL.

So hopefully you rolled with us on the bold outlook we gave in December of 2020, the last time we visited Willie and said”

“Besides plenty of frustrations for Willie and the Rangers, the disappointing year produced something else. BARGAIN BASEMENT prices on Willie Calhoun rookie cards. If you believe the potential is still there, picking up one of the following cards could amount to some BIG TIME profits margins!” 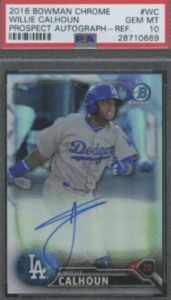 “Talk about a buying opportunity. Even some of the rarer refractors in MINT condition are going for less than $50 heading into 2021. Wow. Compare that to the same card for another young talent such as Wander Franco and your jaw will drop.

You’re gonna wanna be on the lookout for the autograph or refactor versions for the biggest value. Or better yet, go ahead and snag one with BOTH an autograph and refactor tag.

Bowman sets the standard for prospect cards and if Willie ever realizes his potential expect this to be one of his most valuable cards.”

Well, now some of those rare refractors such as the Orange and Gold are selling between $150 and $300. And that’s just the beginning. If Willie keeps it up expect prizes to continue to climb! 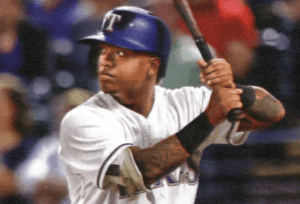 A rare card that shows off Willie’s natural “batter’s eye” (seems like he’s looking for a change-up) and features a dark background that makes his bright home jersey really POP.

At one time this card would have set you back quite a bit. But expect that number to be a fraction of its former self if it surfaces on the market prior to next season. If you see it out there it could be well worth a try.

Hey, it better’s to wear a Black Foil hat than a tin foil one any day! 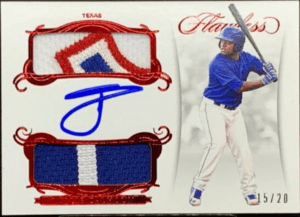 Nothing screams authenticity like a beautiful piece of game fabric. The crisp, clean background and autograph add some icing to the cake. Slap a rock bottom price tag on it and you’ve got yourself the TOTAL package. 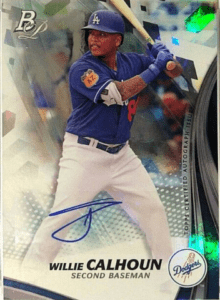 It may not be a Bowman Chrome, but this platinum card is a GIANT in its own right. Look for it with an autograph for added collectibility. Better yet, seek out the Orange refractor AND autograph for an even nicer payday if that breakout season finally hits. 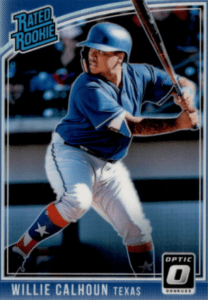 While this is the lowest on our list in terms of value, it’s number one in terms of nostalgia. Who can resist that vintage Donruss “Rated Rookie” font in the top left corner? Time to take a trip down memory lane (and a very inexpensive trip at that……FOR NOW). 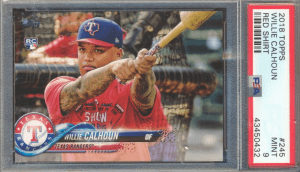 There are plenty of options from this set but we prefer the horizontal warm-up swing version of card #245. The serious look across Willie’s face is what we hope to see more of in 2021. Let’s get back to business! 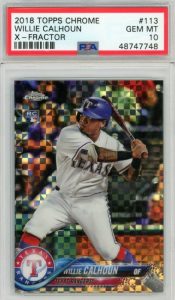 Last but certainly not least is Willie’s top true rookie card. While not the prize of his 2016 Bowman Chrome prospect card, it’s more affordable so target this one if you’re not ready to break out the wallet for the Bowman. Target the Sapphire edition or a refractor version if you’re really looking to make a splash.

Looking for a more proven player to throw some money at?  Ken Griffey Jr. Rookie Cards never go out of style!

“That awful 2020 created quite the buying opportunity. The price of his first year and prospect cards have absolutely cratered and nobody knows what will transpire in 2021. Will he bounce back from that devastating pitch to the face and hamstring injury? Or will it be more of the same production we saw in 2020?

Either way, it only seems reasonable to think the bottom is in after last season. We’re naturally optimists and expect Willie to get back to form in 2021. As we talked about earlier, Willie showed what he’s truly capable of in his first real shot on the big stage in 2019. Even if he doesn’t get back to that 40 homerun potential, we’d certainly expect the coming year’s performance to be MUCH better than last.”

As we illustrated earlier prices have already bounced back BIG from the lows caused by the awful 2020 season. Willie is hitting once again and giving the rangers some much-needed production from the leadoff spot. Right now it’s looking like Calhoun may just have that long-awaited breakout campaign. If he does be prepared to rake in some nice profits if you invest in a few of his cards today.

Investment Rating Score Card: 8 out of 10

From a Bounceback Candidate BREAKOUT Candidates!