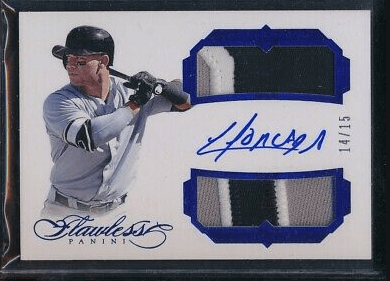 At the beginning of last season, we thought it’d be a great time to pick up a few Yoan Moncada rookie cards. The young switch hitter was off to a scorching-hot start in 2020 and appeared ready to provide an encore to his 2019 breakout performance. But then Yoan started slumping and ended up with .225 average for the season. Yikes. Needless to say, we didn’t find many great selling opportunities for those cards we picked up.

However, we like to look on the bright side. Moncada is only 25 and should be just now entering the prime of his career. While that 2020 season was pretty ugly, Moncada has proven he has what it takes to live up to his skill set that had all the scouts falling all over themselves. Call us crazy, but we expect Moncada’s triple slash to sharply rebound off those 2020 lows, and thus the value of his rookie cards. So is our loss (temporary and unrealized!) your buying opportunity?

Which Player is Yoan Moncada?

In 2020 Yoan was barely able to keep his average over the Mendoza Line and reverted back to striking out at an obscene clip with 72 in just 200 ABs. A performance that was strikingly similar to his first few years in the league.

In his 2017 rookie season, Yoan could only muster a .231 average and it didn’t get much better the next year. Over the course of 2018, Yoan remained healthy and amassed 568 at-bats. And given the previous year’s swing and miss trend, it comes as no surprise that Moncada led the majors in strikeouts with 217.

But right as many were beginning to label Yoan Moncada a bust, 2019 happened. In a breakout of epic proportions, Moncada raised his average by 80 points from the following year and hit .315 over the course of the season. Additionally, Moncada showed plenty of pop with 25 long balls and a .548 slug. And that atrocious strikeout rate?  Down from 217 to 154. These are the numbers that illustrate Moncada’s true potential. Numbers that are in line with what he did all throughout his minor league career.

So which Moncada will we get in 2021? The answer to that question will make a big impact on the short-term value of the following Yoan Moncada rookie cards.

Unlike Moncada, here’s a former top prospect who definitely DID NOT fail to live up to expectations… 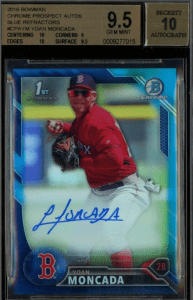 Like with so many other modern-day baseball rookie cards, Bowman Chrome leads the way. There’s a variety of refractor colors to choose from and autographed versions feature Yoan’s signature just above the Boston logo at the bottom. Some of the highest in value exceeds the $1,000 threshold. These are the highly graded rare refractors with Yoan’s autograph on them. However, non-auto base cards are available for less than $100 if you’re worried about another down year in 2021. 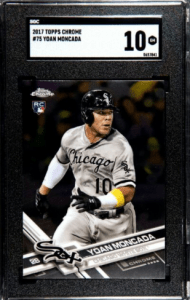 A stunning card that shows Yoan in his new White sox jersey making some sort of athletic move (though it’s hard to tell what). Just like Bowman Chrome’s, these offer both refactor and autograph versions. However, they come much cheaper. For instance, a Green Refractor Auto with graded a 10 by PSA recently sold for less than $300. Quite the discount over Bowman.

In addition to the card shown above the set also offers a photo variation card showing Moncada walking across the field with his equipment bag slung over his shoulder that holds a similar value. 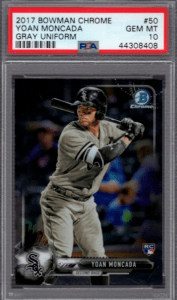 Although not as valuable, this one represents Yoan Moncada’s true rookie season. As shown by the RC logo at the bottom right corner. The card features Yoan Moncada batting from the left side of the plate ready to unleash some damage on the opposing team. Plenty of great options for less than $100. 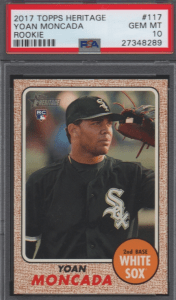 Hard to beat a Topps Heritage card. As far as looks go, anyways. These aren’t as expensive as the cards we’ve gone over so far either so it’s a great starter card if you’re new to the game. Available in both a Red Sox and White Sox uniform! If you have $20 to spare this retro Yoan Moncada rookie card could be yours. 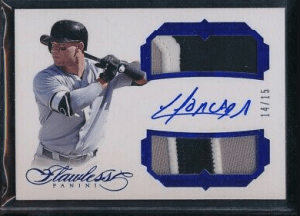 Because how else are you gonna get a Yoan Moncada rookie card with a piece of apparel attached? A solid collector’s item. To find a card with much value in this set you’re gonna have to look for the incredibly rare parallels. Even then, you’re looking at well under $100 for most of the Panini Flawless options. Another great set for casual investors.

Is it time to jump in the Wander Franco rookie card market?

“Right now it appears Yoan Moncada is shifting from the young player who wasn’t quite ready for big-league pitching to the 5-tool impact player he was scouted as. Yoan has a full season of at the plate success under his belt and it appears another could be on the way. And if Yoan does have another monster season? Folks are gonna wake up to his long-term potential real quick. Which could lead to some easy short-term profits for you! But if you are in it for the long haul, there are a lot riskier plays than a former number 1 prospect who appears to be hitting his stride.”

Clearly, we whiffed on that one. However, Moncada wasn’t the only one who underperformed in the shortened season last year. Yelich comes to mind. At any rate, had he a full season he may have been able to turn it around and end up with some good numbers by the end of the year. Regardless, the regression last year causes plenty of concern going into 2021. 6/10

We wouldn’t bank on a short-term play this year. So if you’re gonna need your investment back soon we’d advise you to stay away from Yoan Moncada rookie cards. However, if you don’t mind looking a couple of years ahead Moncada could be a good play. He’s too talented and we know the ability he flashed in 2019 is still in there somewhere. If Yoan spends less time making music videos and more time in the batting cage he should sort it out over time. 7/10

Focus on the next few years and see what happens. One way or the other we should get our answer on whether he’s the superstar all the scouts thought he was or just another failed prospect. No need to think too far ahead here. 2/10