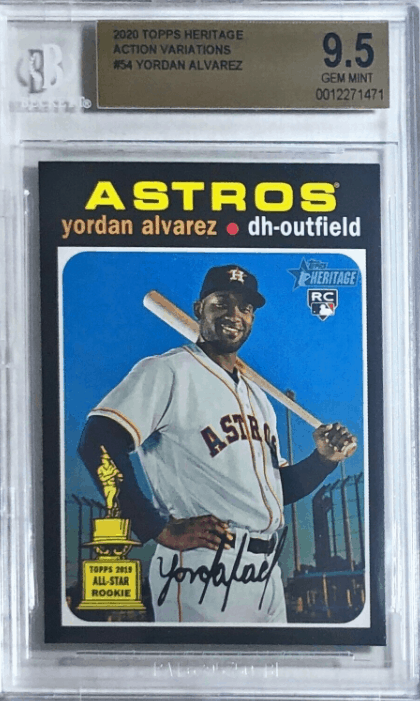 Although it took a while for Yordan Alvarez to begin playing in 2020, once he did he quickly began swinging the pine like an absolute madman. However, that did not last long as knee issues led to season-ending surgery. That certainly wasn’t a good thing for anyone holding a Yordan Alvarez rookie card at the time. However, there’s plenty of reason to be optimistic if you stayed the course.

According to MLB.com Alvarez should be ready to roll be spring training. Meaning he’ll have the opportunity to play his first FULL SEASON of big-league baseball. As long as no major injuries, except those 500 plus at-bats to produce some jaw-dropping numbers. Here’s why.

When it comes to his MLB career, there’s no doubt Yordan Alvarez got off to a fast start (to say the least). But let’s not forget about the sick numbers he put up in his incredibly short stint in the minors. In his 3 seasons on the farm, Alvarez posted a .313 career minor league average and never slugged lower than .481. However, it wasn’t until his final minor league season that Yordan Alvarez finally hit his stride. In just 213 AAA at-bats in 2019, Alvarez cranked 23 jacks and posted an absurd 1.184 OPS, forcing a mid-season call up to play with the big boys.

And he wasn’t worried about those so-called “big boys” either. At least not the pitchers. In just over half a season of playing time, Alvarez ripped opposing pitchers for 27 home runs, 78 RBI, and a .313 average. He also slugged .655 and posted an Albert Puljos-like 1.067 OPS.  Talk about a welcoming party. 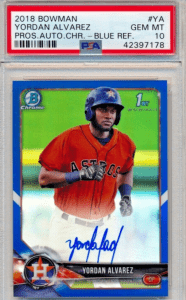 As far as dollars go, you’re not gonna find any more valuable than this. While not a “true” rookie card, this one captures what appears to be a homerun trot. Something he became quite familiar with on the farm. There’s plenty of refractor options and it’s available with an autograph. 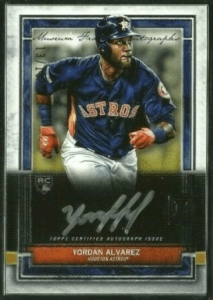 When it comes to aesthetics, good luck finding a Yordan Alvarez rookie card that has more eye-appeal than this one. The card features Yordan running down the baseline and looks like a true work of art. It’s almost as if it belongs in a museum…. 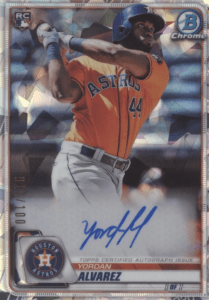 Another true Yordan Alvarez rookie card that serves as a good follow up to the 2018 version.  This one isn’t quite as expensive and has a number of variations to choose from. Great value play if you’re looking for the Bowman Chrome name at a less costly price. 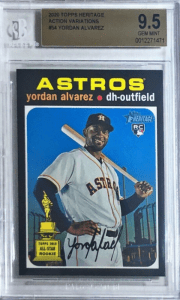 Simply a graceful picture of Yordan with the bat on his shoulder. The card features a yellow font that absolutely explodes out of a crisp black background. Look for the one autographed in red ink! 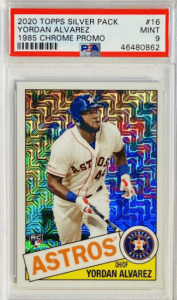 A card that harkens back to the 1985 set. But of course, this is 2020 so you know there’s gotta be some bling! This card has all kinds of refractor styles and is becoming highly collectible. 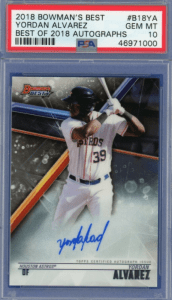 We finish the list with another “rookie” card from Yordan’s minor league days.  If you’re looking for a value play on a minor league Yordan Alvarez card, this one is the way to go. Plus it looks a lot cooler than the 2018 Chrome if you’re asking us! 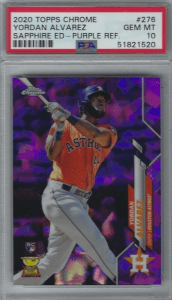 The Topps Chrome Sapphire Purple Refractor shown above is one of the most valuable cards in the set and can sell for well over $1,500 if it’s in the right condition. However, there are plenty of options for more affordable prices if you’re not looking for a sizeable investment.

Looking for another young player who’s looking to bounce back from injury? Check out these Alex Kirilloff rookie card options!

Due to the missed season and injury concerns, there’s money to be made here. Compared to what they could have become with a healthy 2020, prices are clearly in the “buy” territory. With Alvarez, you really don’t have to worry about the production. It’ll be there if he’s healthy. So will your satisfactory profit margins. 9/10

Once Alvarez is back to health and the market gets going, it’s hard to see it slowing down anytime soon. The kid is just too good of a hitter from what we’ve seen so far. We made a young Puljos comparison earlier, and while those are some huge shoes to fill, Yordan Alvarez may be the hitter to do it. 8/10

Alvarez is a special talent. So special in fact that we’re not afraid to think long term. Even with his relative lack of big-league experience. However, we’d like to see him add to his body of work before we’d go with this approach over a short or medium-term play. 7/10