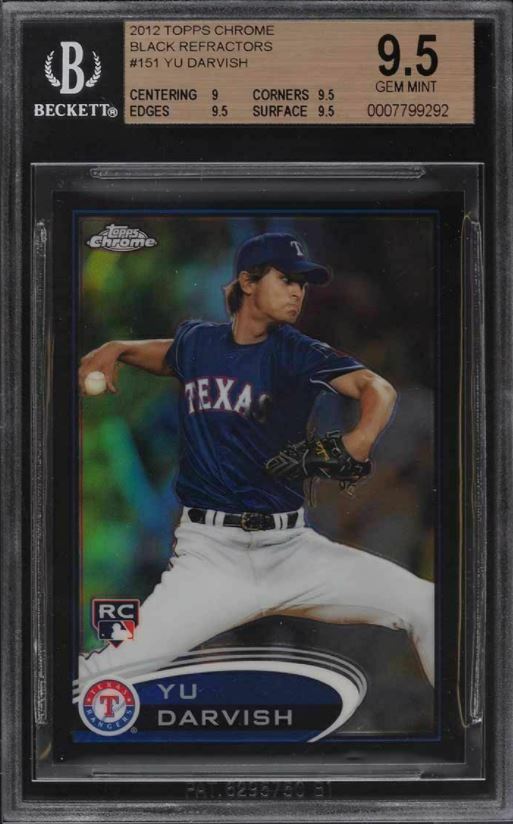 With a comeback like we’re seeing the last couple of years, it’s hard not to be tempted to pick up a Yu Darvish rookie card. As you know, Darvish was one of the hottest pitchers when he first started his MLB career fresh off the scene in Japan. He immediately made an impact with the Texas Rangers averaging 200 innings over his first 2 seasons while striking out just about everyone he faced along the way.

However, that large inning load in both Texas and Japan finally caught up to Yu as that powerful arm started to break down in 2014. Consequently, the Japanese phenom fell off the MLB scene for a few years and didn’t breach the 170 innings mark again until 2017 when he was 30 years old. And now Darvish finds himself right back in the lofty position of being one of MLB’s elite starting pitchers with an ERA under 2.30 since the start of the 2020 season. Oh and he’s still missing bats as he did in his 20’s. And with the San Diego Padres being a serious contender for the World Series this year, the value of his cards could start to resurge. There would be something truly special about a comeback season that ends with a World Series Championship. Now let’s take a look at what’s out there! 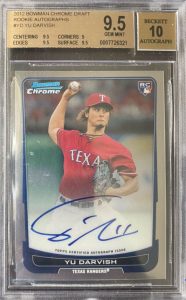 The cream of the crop Yu Darvish rookie card features plenty of parallels and is available with the fireballer’s autograph. Besides having a picture of Darvish in action, it also contains the all-important RC logo in the top right corner. Some of the most popular parallels include the gold, green, and purple refractors. So if you see any of these cards floating around, consider purchasing them at the beginning of his comeback while even the most expensive are just a few hundred bucks. 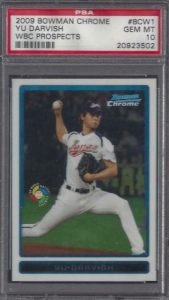 Now it’s only fair to mention the prospect card from Bowman Chrome that came out in 2009. While not as popular or as valuable as the 2012 RC, this should be a favorite of all those prospect junkies out there (you know who you are!). There are also a few different parallels of this card as well, but not as many as offered by the 2012 Chrome collection. By the way, there’s a Bowman Chrome Draft card from this year that holds a similar value if you’d rather have a card of Yu starting point-blank into the camera. 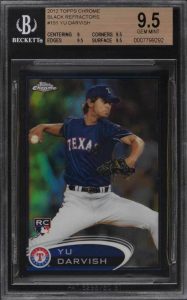 The tried and true Topps Chrome is second in line in both popularity and value when it comes to Yu Darvish rookie card options. Just like the Bowman Chrome collection from the same year, this one is available with an autograph and a wide variety of refractor options. And really, there’s no reason not to go for both considering even a combination of the two will still cost you less than $200 in most cases. 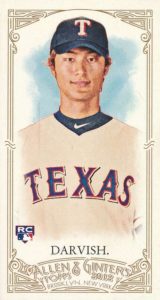 The style of this card is like none other as its appearance offers a throwback to the old days of baseball card collecting. The VERY old days. If you’ve ever seen the world-famous Honus Wagner card that was once the most expensive baseball card in the world, this card offers a very similar design. It makes for a great choice not only because of the small number of these cards that exist but also for the nostalgia. Oh, and it’s incredibly affordable with plenty of options for less than $20.

Be sure to check out our Shohei Ohtani rookie card review!

If he stays healthy all year Darvish could easily be a Cy Young Award finalist. Not to mention a vital part of a team that could very well end up making a deep playoff run. Health is the key here. If the arm holds up you should see some good profits. If not? Well, there’s always next year! 8/10

Honestly, we’d be satisfied with a sick 2021 performance and sell towards the end of the season. However, if you do hold on after the end of the year there could be even bigger rewards ahead. Just look at what Justin Verlander did after reviving his career. Higher risk but higher eward. 7/10

While we usually reserve this strategy for future Hall of Famers, it’s a bit different with Darvish. Sure he won’t end up in Cooperstown. However, a strong comeback would easily make him one of the greatest Japanese players to ever play in the MLB. And that is something that should keep these cards relevant long term. 7/10

3 Investment We Like More than a Yu Darvish Rookie Card