Although you may not have even heard of the guy yet, it’d be a good idea to become familiar with the Zac Veen rookie card market. Why? For starters, he was the 9th overall pick in the 2020 MLB draft. On top of that, many scouts are calling him the best high school hitting prospect that was available. And perhaps he would have been the best-hitting prospect available PERIOD if not for the legendary Spencer Torkelson.

But all hype and no delivery isn’t going to do much if you invest in one of Veen’s cards. Thankfully he’s been delivering like the Amazon truck so far in his first taste of minor league baseball. So far in only 230 bats in A-ball, Veen has gone yard 9 times and has swiped a whopping 27 bags. Talk about a power-speed combo! Oh, and he’s batting .283 with a .399 OBP to go along with a .487 slug and .886 OPS. Safe to say he’s having a decent first season in professional baseball.

Oh, and did we mention he’ll eventually be playing half his games at Coors Field? Yes, the future looks rosy for Zac Veen. So why not put on your finest pair of rose-colored glasses and take a look at the following Zac Veen rookie cards!

In time there will be plenty of other options available so we’ll keep this list updated as more cards begin to roll out. However, with a prospect like this, we can’t fight the urge to get an early jump on things! Side note: seeing as how early it is, not many of the following cards have made the journey back from Beckett or PSA. Therefore all values assume the cards are in brand new condition without a professional grade. Let’s get started! 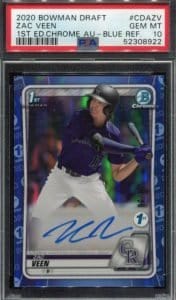 Let’s start with THE early Zac Veen rookie card to own. You’ll see many different refractor options, and of course, autographed cards are available. If you’re looking for something on the low end grab a base card with an autograph or something like a non-auto Blue Foil refractor for a hundred bucks or so. Moderate investors should consider autographed versions of the Black or Gold refractors for around that $500 price point. Meanwhile, those who are really looking to break the bank can spend a couple of grand pretty quick by honing in on the autographed Orange refractors.

A set better know for its basketball cards, Panini Prizm draft picks is one of the first sets offering cards featuring Zac Veen. The card above is the Color Blast insert that currently holds a value of somewhere around $200. Looking for something more traditional? Go for a Prizm variation of the base card. Even the rare auto Gold Prizm (print run of just 10) is available for only around $100. 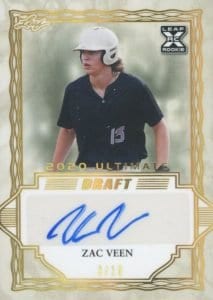 The card shown above is the autographed Gold Spectrum parallel that’ll only cost you around $50. Overall, this set is great for casual investors who aren’t looking to part with too much of the ole’ bankroll. In addition to the Gold, the even rarer Red Spectrum auto (print run of 5) is also available for around $50.

Just like Panini Prizm, Contenders is better known for its collection of early edition high-end football and basketball cards. However, it makes for a great early-look baseball card as well. For instance, there are plenty of options in this set-valued in that $50-$100 price range. Another great Zac Veen rookie card option if you’re not looking to risk too much. 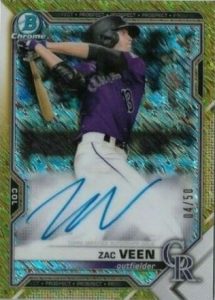 Last but not least we have the latest version of Bowman Chrome and there are quite a few moderately priced Zac Veen rookie cards to target. For instance, you should still be able to get a Gold Shimmer autographed card with a print run of 50 for less than $200. Not bad, not bad at all. If Veen finishes strong throughout the second half of 2021, expect him to shoot up those prospect rankings FAST. Once the secret is out these prices should be long gone. So like Too Short says, get it while the gettin’ is good!

Question of the day: Which top prospect will have a bigger MLB impact in 2021: Alex Kirilloff or Jarred Kelenic?

The success of your short-term play greatly depends on how Veen fairs in the minors and how quickly he rises up that Top 100 Prospects list. So far so good. And given the scouting reports, it doesn’t seem like continuing the production as he rises through the minors will be a problem at all. In fact, we wouldn’t be surprised to see a promotion in the near future and ascend towards the top 10 prospect list by year’s end. If that happens your short-term flip will be sitting PRETTY. 9.5/10

With an MLB ETA of 2024, a medium-term investment allows you to ride the Zac Veen rookie card wave right up until the time of his eventual call-up. If you think he’ll be able to handle all levels of the minors with ease, there may be even bigger profits if you hold out closer to that big-league appearance. 9.5/10

If you’re holding for over 3 years you’re likely banking on MLB success. Something that can be hit or miss. Even with the best of prospects. We don’t recommend this mindset. At least not from the get-go. If you like what you see after a couple of years you’ll be faced with a tough decision. Take your profits or risk it all against big-league pitching. 5/10