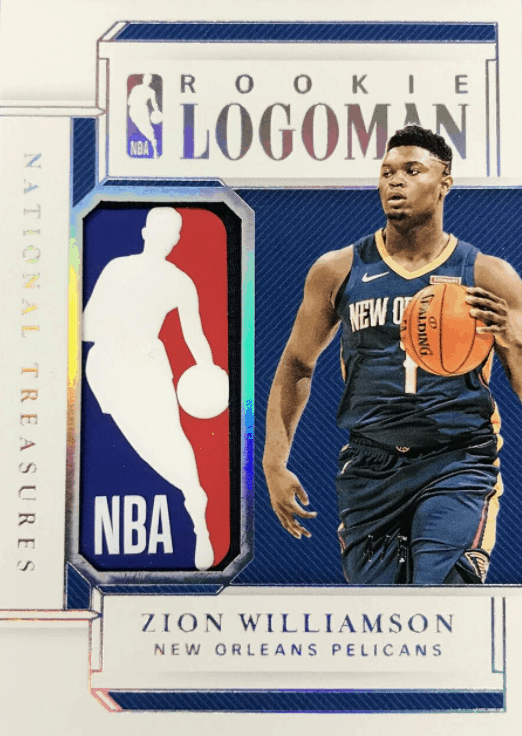 If you’re a fan of the NBA and a collector of sports cards, the thought of buying a Zion Williamson National Treasures card has probably occurred to you. And what’s not to like? The kid is quickly becoming one of the most talked-about talents in the game. And if he gets some help, the victories are sure to follow. Therefore, it may be a good idea to hop on the Zion Williamson train before it leaves the station. ALLLL ABBBOOAAARD.

Zion Williamson: The Road to Stardom

Zion Williamson took the college basketball world by storm in 2018-2019 when the rookie from Duke University made a habit of throwing down monster slam after monster slam. But it was long before that that Zion decided he was to be a superstar. The 6-foot 6-inch, 240 pounder from Salisbury, North Carolina set his sights on becoming a college basketball player at the age of five. He was also a football quarterback and a soccer player, but his first love was basketball. Williamson’s mother, Sharonda Sampson, served as his coach for his AAU team and other youth sports teams that Zion played on.

By the time Williamson got to high school, the county was put on notice. In what was an extraordinary senior year, Williamson averaged a mind-blowing 36.4 points, 11.4 boards, and 3.5 assists. On top of that, Williamson made the USA Today All-USA and MaxPreps All-American teams. And if all of that weren’t enough, Zion went ahead and won South Carolina Mr. Basketball for good measure. He then went on to play for Duke (much to the chagrin of Roy Williams) where he joined Kevin Durant and Anthony Davis as the only freshman with 500 points, 50 steals, and 50 blocks in just one season.

When it was time for Williamson to declare for the NBA Draft he was slotted as the consensus #1 pick by just about every analyst and sportswriter in America. The New Orleans Pelicans did exactly that and took Williamson before any other team had the opportunity to even consider it. Although his rookie season was marred with injuries, Zion was still named to the NBA All-Rookie Team and averaged 22.5 points per game and 6.3 rebounds per game. Impressive.

So after a brief look at his highlight reel of a road to the NBA, it’s clear why many hobby enthusiasts are searching for a Zion Williamson rookie card. That’s where we come in! Here’s a few we have our eyes on. 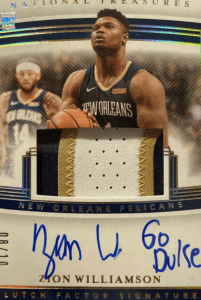 This card features Williamson with his eyes focused on the hoop, getting ready to shoot a free-throw. The card includes a patch of his blue New Orleans Pelicans jersey along with an autograph at the bottom. 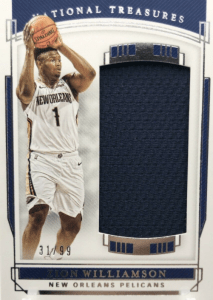 This one features Williamson in his white Pelicans jersey. He is holding the ball slightly over his head, looking to dish. The built-in jersey is much larger than it is on some other cards, making it a very nice find! There haven’t been many graded versions to hit the market but you should be able to pick up one with no grade for well under $1,000. 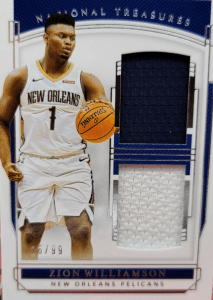 The features Zion palming the ball in his all-blue Pelicans jersey with a nonchalant that seems to say “dare you to take it from me”. The card certainly isn’t the most valuable on this list but it’s one of our favorites nonetheless. A few hundred bucks should be able to get it done for a nongraded. 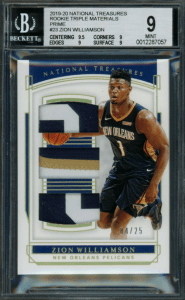 Well if you didn’t think the dual materials were enough, there’s great news. National Treasures has a TRIPLE MATERIAL Zion Williamson rookie card. You gotta wonder how much more matieral could they possibly pack into just a single card. At any rate, the cards a great addition to any Zion Williamson collection. 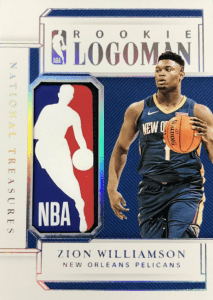 This is hands-down the most valuable card that you can get with Zion Williamson on the front. The card has a big ROOKIE LOGOMAN print on the front and a bit of a rainbow shine around the borders. The card is so rare that many have put on bounty one being as high as half a MILLION dollars.

We LOVE a short term play on all of these cards we’ve listed. In the few games he played his rookie season, Zion showed that he’s a force to be reckoned with. A healthy season next year should do wonders for the price of his basketball cards. Seems like easy profits to us! 9/510

If the Pelicans go out and get Zion some help, the team should have an incredibly bright future. And as you know, the success of the player’s team can do wonders for his card values. We don’t think the Pelicans will squander this talent. 9/10

It’s way too early in to be thinking long term on one of these cards. See how next year goes and make a decision if you want to sell or hold out for bigger profits in the medium term. If Zion turns into a bonafide superstar in a few years start considering a longer term investment.